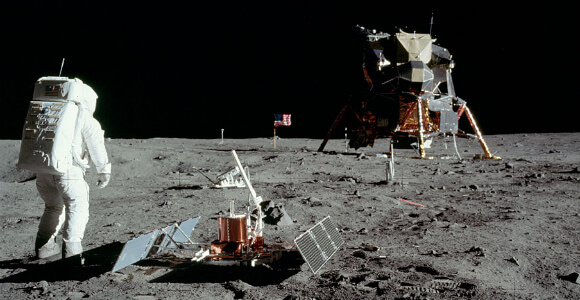 We just celebrated the 45th anniversary of the Apollo 11 Moon landing.

The fact that we went to the Moon with 1960s technology is extraordinary.

The fact that we never went back is shameful.

Should we send another mission to the Moon? Absolutely.

But it should be a private effort — incentivized by government, but not carried out by the government.

And it should be part of humanity’s expansion to Mars and the near-Earth asteroids as well.

Thousands of years from now, it will be these next few decades that are remembered as the moment in time when the human race became a multi-planetary species.

You are alive during these times and it’s part of your legacy.

But this time, when we go back to the Moon, it won’t be with an Apollo-style program.

Missions this complex now require the kind of cost efficiencies and risk mindset found only in today’s commercial industries and entrepreneurial risk takers.

To be affordable and successful, these missions need to use the accelerating (exponential) technologies we are developing today in our labs and commercial companies.

Unfortunately, our traditional NASA approach was to use 20-year-old stuff — or, in other words, only use technology that has been proven to work time and time again.

Did you know that Curiosity — the pinnacle of our Mars exploration program roving around the surface of Mars today — is using a PowerPC processor similar to that in your 1997 PowerBook G3 Laptop… 17 years ago?

The other challenge with our traditional government space programs is their “start-stop-start-stop-CANCEL” cycle. The biggest of programs take a decade to execute (and thereby span several election cycles). As such, time and time again we’ve seen the most audacious government ventures canceled as Democrats scrap Republican initiatives, and Republicans sideline Democratic programs. Consequently, nothing gets accomplished.

It is only with a commercial mindset and commercial technologies (supported by government incentives) that we will achieve the long-term exploration, commercialization and industrialization of space.

The systems pioneered by a company like SpaceX, with its Falcon 9 rocket and Dragon2 spacecraft (which allows for propulsive landing), is a perfect example of what we need to go back to the Moon and beyond to Mars.

By the way, have you ever heard Elon speak about his plans for Mars? He’s publicly committed to providing round-trip human transport to the Red Planet for $500,000 per person in about 15 years.

I for one, wouldn’t bet against him.

At the same time, my own company Planetary Resources has a team of 40 engineers up in Redmond, Washington building a new generation of autonomous ‘space drones’ called the Arkyd-200 and Arkyd-300 spacecraft. These are drones designed to find and prospect near-Earth asteroids for strategic metals and rocket fuel (hydrogen and oxygen).

Finally, I’m very proud of our Google Lunar XPRIZE, which has offered $30M (of Google’s money) in purses, plus up to $30 million in additional NASA contracts, to the first private team to build a robot, land it on the Moon, send back photos and videos, and rover (or hop) 500 meters.

In success, all of these commercial projects and initiatives will spark the creation of a cottage industry of exploration companies that will help bring down the cost of accessing the Moon, Mars and the asteroids by 50-fold.

These next few decades represent the window in time when the human race is moving irreversibly off the Earth. Thousands of years from now, when humanity looks back, it will be our generation who took the bold steps beyond the bounds of Earth.

Konstantin E. Tsiolkovsky, the Russian scientist considered the father of modern-day cosmonautics, famously said, “Earth is the cradle of humanity, but one cannot remain in the cradle forever.” It’s time for us to get out of the cradle and start exploring the boundless resources of space.

All of this is being made possible by exponential technologies. Ultimately we are demonetizing and democratizing access to space and near-Earth resources.

If you’d like to learn more about how this is all happening, considering joining this year at Abundance 360.

In the meantime, when you look up at the Moon at night, know that you and your children will actually have the opportunity to travel there one day soon.

Every weekend I send out a “Tech Blog” like this one. If you want to sign up, go to www.AbundanceHub.com and sign up for this and my Abundance blogs. And if you want my personal coaching on how to similarly drive industry breakthroughs, consider joining my Abundance 360 membership program for entrepreneurs.