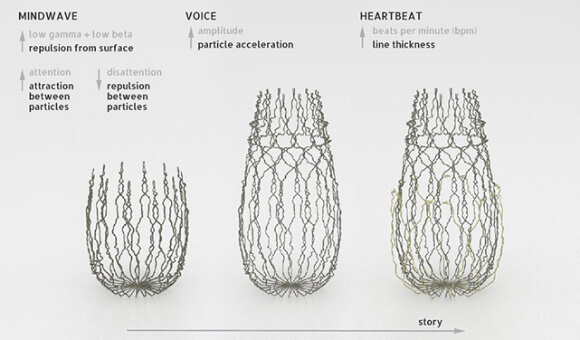 Everyone has knick-knacks of sentimental value around their home, but what if your emotions could actually be shaped into household things?

A project recently unveiled at the Sao Paulo Design Weekend turns feelings of love into physical objects using 3D printing and biometric sensors. “Each product is unique and contains the most intimate emotions of the participants’ love stories,” explains designer Guto Requena.

As users recount the greatest love stories of their lives, sensors track heart rate, voice inflection, and brain activity. Data from their physical and emotional responses are collected and interpreted in an interface, transforming the various inputs into a single output.

The real time visualization of the data is modeled using a system of particles, where voice data determines particle velocity, heart rate controls the thickness of the particles, and the data from brain waves causes the particles to repel or attract each other. To shape these particles into the form of an everyday object such as a lamp, fruit bowl or vase, a grid of forces guides the particles as they flow along their course.

The final designs are then sent to a 3D printer, which can print in a variety of materials including thermoplastics, glass, ceramic or metal. 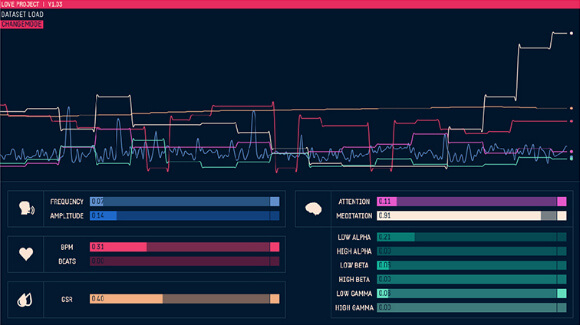 While this method is both creative and intriguing, are any of the produced objects meaningful if the viewer is unable to interpret the emotion from which the object was created?

Looking at the objects produced, it’s difficult to imagine them eliciting similar feelings in viewers as were felt by those recounting their tales of love. Furthermore, the data that produced the objects cannot be extracted, so that information is lost. 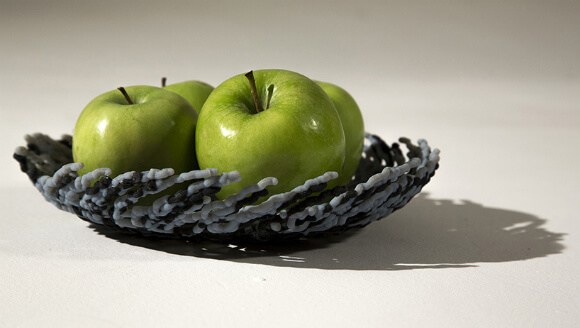 Other groups have begun to experiment with infusing printed objects with interactivity, where the object provides the user with information. Techniques to convert digital audio files into 3D printable audio records have been developed as well as a way to play a ‘sound bite’ on a 3D printed object by running a fingernail or credit card along printed ridges which produce a sound.

The “Love Project” is an interesting experiment that successfully includes the end user in the process of creating objects of meaning while also democratizing and demystifying the use of interactive digital technologies, yet it’s a stretch to think that the aesthetics of the objects themselves can help understand the mysterious human emotion of love.

What would be truly exciting is if we were able to transform intangible emotions into data, that data into a physical object and interact with the object in a way which brings insight and meaning and new way of understanding and visualizing our emotional states. With designers like Requena and Neri Oxman finding new ways to integrate art and 3D printing, we’re likely to see even more exciting projects at the interface of technology and expression on the horizon.