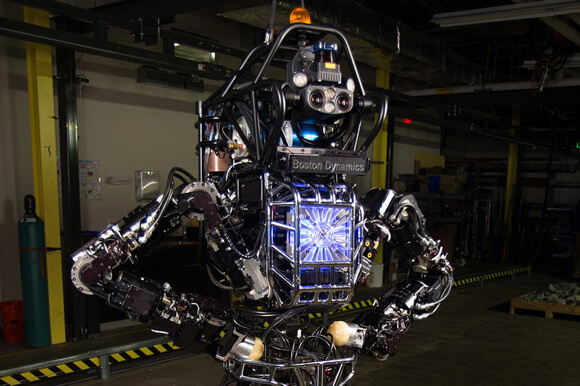 The humanoid robot, Atlas, stands six feet tall and weighs three hundred pounds. The bot is built like an NFL offensive lineman, only substitute muscle, ligament, and bone for steel and hydraulics—and swap speed and agility for slow and awkward.

Atlas is a work in progress.

Still, take a moment to be impressed. Atlas can balance and walk on two legs. It can navigate uneven surfaces, like a field of rubble, and right itself after taking a hard knock from the side. The robot comically does calisthenics and pushups.

Robotics pioneer Hans Moravec says of robots and artificial intelligence: The hard problems are easy and the easy problems hard. A robot with the motor skills of a human infant, then, is more impressive than one that plays chess.

And Atlas is evolving. Instead of simply walking around or making viral internet videos—the robot is continuously becoming more useful, which is, of course, the point.

A recent video shows (a slightly morose, if we do say so) Atlas hauling a heavy piece of metal scaffolding around the lab. Presumably, this isn’t as easy as it appears. The weighty metal unbalances the robot on one side making stability more difficult.

The DARPA-funded Atlas was developed by Boston Dynamics—one of eight firms snapped up in Google’s 2013 robotics buying spree—but it has since been handed over to MIT’s Computer Science and Artificial Intelligence Laboratory (CSAIL).

CSAIL is improving the Atlas software to make it faster and more autonomous. And a hardware change is coming too. Atlas currently trails a cord for power. CSAIL aims to cut the cord sometime this year or next (with the help of Boston Dynamics)—replacing external power with an onboard power source so Atlas can roam free.

But never fear. Atlas is no Terminator…not yet at least. The robot is aimed at disaster recovery and hazardous situations humans ought best avoid. DARPA has supplied a number of teams competing in the DARPA Robotics Challenge with an Atlas bot.

The DRC was inspired by the Fukushima nuclear meltdown—the worst of which may have been avoided had a robot capable of human-like tasks (driving a vehicle, turning off a valve, opening a door) been able to enter the radioactive environment.

At the DRC trials last December, another Google acquisition Schaft (now self-funded) outscored the competition. The finals will take place next June in Pomona California.

From there? More robots acting more like humans, of course.