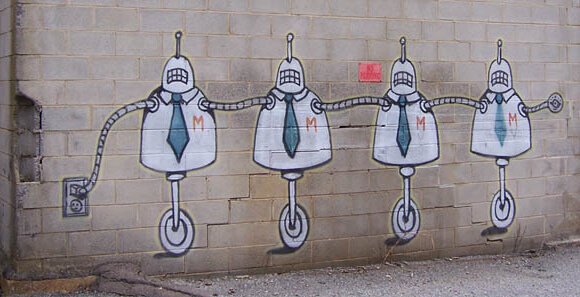 Here at Hub, we’re thinking deeply about all the changes happening in the world, thanks to some great articles published this week wrestling with the implications of technology’s progress. Just scan the headlines and you’ll agree, we are living in a world where science fiction is becoming science fact.

ROBOTS: How to judge a ’bot; why it’s covered
E.C. | The Economist
“What of rights for the machines themselves? Dr Bertolini says that there are several arguments against granting them. Firstly, artificial intelligence is still far from surpassing that of humans. More philosophically, any autonomy that robots gain is designed and granted by humans. Thus, the argument goes, robots are to be considered objects, not subjects; the question of rights then disappears. On the other hand, the report says that in limited circumstances, robots might be granted a legal status similar to a corporation, perhaps enabling robots to perform legal transactions.”

INTELLIGENCE: Why Supersmart Animals Are Coming
Tim Maughan | BBC
“Even if the idea of uplifting may seem fantastical – and not the sort of goal we should be pursuing – the potential medical benefits in terms of combating human disease and injury suggest further progress down a path that leads to uplifting is inevitable.”

WEARABLES: It’s Time To Look Beyond The Smartwatch
Adrian Covert | Co.Design
“So many concepts and ideas related to wearables are focused on ways to interact with smartphones less…Or there’s this idea that wearables have to be a thing we interact with at all. But what if wearables focused more intently on the things smartphones can’t do?”

BRAIN: The free-will fix–New brain implants can restore autonomy to damaged minds, but can they settle the question of whether free will exists?
Walter Glannon | AEON
“At the moment, [brain-injured] patients have no say over their lives – not even whether they want artificial hydration and respiration, or any extraordinary interventions to keep them alive. Yet with the new technologies we could ask them and record the activity in brain regions controlling language and thought, giving such patients choice over their own life and death.”

FUTURE: Transhumanism Has a Conspiracy Theory Problem
Zoltan Istvan | Motherboard
“Conspiracy theorists likely number in the tens of millions of people around the world. A recent study out of the University of Chicago found that 49 percent of Americans believe in at least one medical conspiracy theory.”

SOCIETY: What Is An All-Ages-Friendly City?
David Thorpe | Sustainable Cities Collective
“If different generations are segregated there is little opportunity for them to learn to understand each other and what they have to offer. But both extreme age groups have much in common: they want access to safe public spaces and have a fear of crime; they need to socialise, face stereotyping and may be disadvantaged in the workplace.”

BIG DATA: Mindsweeper–How to use the data generated by educational technology to improve schools
Annie Murphy Paul | Slate
“There’s another potential danger regarding student data that is much less frequently noted: the possibility that it will sit unused, inaccessible to parents, educators, the general public—and students themselves.”