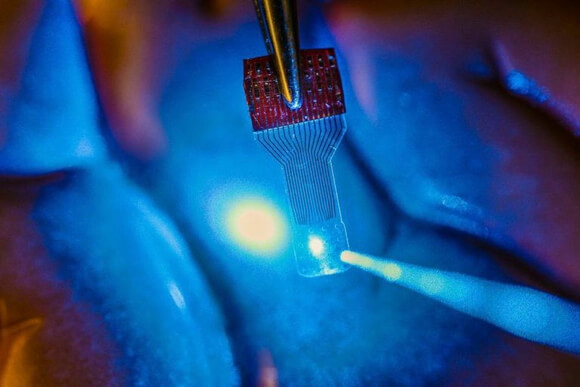 A new implantable brain chip developed by the University of Madison-Wisconsin may help advance our understanding of the human brain. The chip is flexible, transparent, biocompatible—and uses a graphene sensor array just four atoms thick.

To understand a system, we have to observe it, and so far, observing the living brain has proven challenging. Current observation methods of structure and activity tend to interfere with each other, so we can choose structure or activity, but generally not both.

“Historically, we’ve kind of looked at one or the other: we either take high-resolution imaging to look at how the brain is structured, or we poke and prod it with electrodes to try and measure its activity,” Justin Williams, a UW-Madison professor of biomedical engineering and an author on a paper detailing the implant, told Motherboard.

Ideally, of course, researchers would like to look at both structure and activity at the same time. The problem? The implants used to directly measure signals in the brain tend to block the view of imaging techniques intent on recording brain structure.

Graphene, the much-lauded (but still experimental) supermaterial may offer a solution.

In its purest form, graphene is a one-atom-thick lattice of biocompatible carbon. The device’s sensor, comprised of just four sheets of graphene, is extraordinarily thin—this accounts for its flexibility and transparency. Further, because graphene is highly conductive it can be used as a sensor of electrical activity in the brain.

Taken together, the sensor is thin (and robust), transparent, flexible, and conductive—it can measure brain activity without interfering with other instruments.

“Our devices are transparent across a large spectrum—all the way from ultraviolet to deep infrared,” says Jack Ma, professor of electrical and computer engineering at UW-Madison. “We’ve even implanted them, and you cannot find them in an MR scan.”

Beyond traditional methods, graphene implants could also work with a brain research technique called optogenetics in which scientists genetically manipulate neurons to respond to light. And they might improve neuromodulation therapies where patients with brain disorders use electrical stimulation from implants to control symptoms.

“Despite remarkable improvements seen in neuromodulation clinical trials for such diseases, our understanding of how these therapies work—and therefore our ability to improve existing or identify new therapies—is rudimentary,” says Kip Ludwig, a program director for the NIH’s neural engineering research efforts.

Though the Darpa-funded project was primarily concerned with research, they have begun exploring medical device applications too. In one instance, they collaborated with the University of Illinois Chicago to build a contact lens with dozens of sensors to detect retina injury and perhaps, in the future, aid in early diagnosis of glaucoma.

To become widely used, researchers still need to learn how to make graphene cheaper. Currently, there is no industrial method for its production. However, as production techniques improve and the material becomes increasingly affordable and more widely available, graphene-based biosensors might prove useful throughout the body.