Exponential Medicine: This Is Your Brain on Prescription-Strength Video Games

Video games encourage violent behavior. They’re a symptom of our culture’s collective obsessions and neuroses, a sign we have too much time on our hands. You’ve likely heard a rant like this—video games can’t be good for you.

But Adam Gazzaley, UCSF cognitive neuroscientist, isn’t so sure. An avid gamer, Gazzaley thinks specially designed video games paired with neural feedback might one day be prescribed to improve brain health and performance.

In the next decade, Gazzaley told an audience at Singularity University’s Exponential Medicine, we might use video games to decrease dependence on drugs and strengthen healthy brains, making them more resistant to problems down the road. 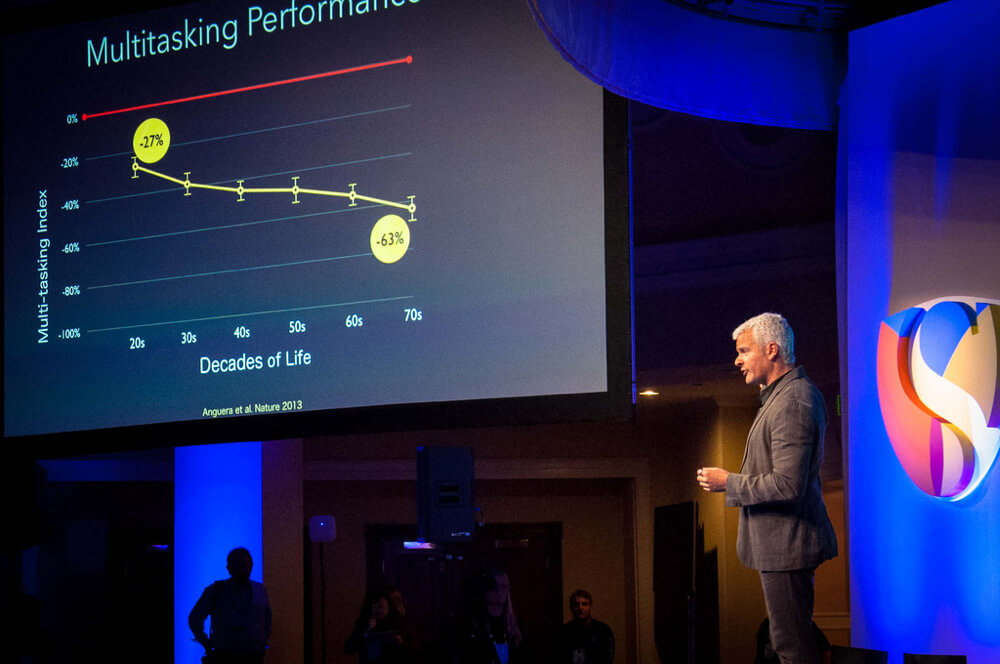 Gazzaley wants to make an “engine of change” in the brain. His fuel? Neuroplasticity, or the brain’s ability to reroute neural pathways in response to stimulus. Gazzaley and his team at UCSF set out to see if they could make, test, and measure a tailored video game system that leverages neuroplasticity to achieve a specific positive change in the brain.

Gazzaley said, even though we all think we’re great multitaskers—none of us are. But young brains are better at it than old brains. Working with Lucas Arts, the team developed the video game NeuroRacer to measure this difference and then, via repeated play, see how much older gamers could improve multitasking abilities.

To a gamer, NeuroRacer wouldn’t likely elicit much excitement. It’s a basic driving game. As the user navigates a hilly road’s twists and turns with their left thumb, signs pop up and, if they’re of a certain color, need to be shot down with their right finger. But it isn’t the game itself that’s extraordinary—it’s how the game changed the brains of those playing it. 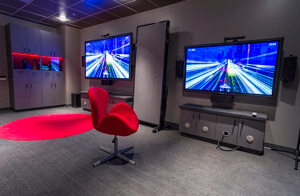 Measured brain activity in the prefrontal cortex via EEG and MRI confirmed superior abilities in younger participants. But in a four year study, the team found four weeks of game play vastly improved the older folks’ abilities. In fact, they even exceeded their younger peers. Further, the game improved other cognitive function like working memory and attention span, and the improvements stuck around for as long as six months without further intervention.

If Gazzaley’s results are strengthened expanded upon, they may be prove important as people live ever longer, but not necessarily healthier lives. Already, increased lifespans are associated with decreasing brain health and cognitive decline.

But Gazzaley isn’t focused solely on old brains—he’s interested in all brains. At his UCSF Neuroscape Lab, his team is building other games. One links physical and cognitive fitness; one integrates rhythm; another targets distributed or peripheral attention; and another, working with Zynga, focuses on meditation with feedback.

The goal is to identify critical cognitive functions and stitch them together into a video game that targets and improves the lot—something Gazzaley calls “neuro-crossfit.”

In response to the 2013 cover of Nature calling his work “game changer,” Gazzaley was careful to note the work is still in its infancy—they need more real world numbers. In the article he says, “Video games shouldn’t now be seen as a guaranteed panacea.” And some say there’s reason to be skeptical of prior research into brain training.

But the signal Gazzaley’s study detected is significant, he says, and warrants a deeper dive.

The lab’s Glass Brain project (video below) makes a detailed 3D model of an individual’s brain with MRI, DTI, and the gaming engine, Unity3D. Using an EEG cap to capture brain activity, a user can take a trip through their own brain on a tablet in real time.

In one demonstration, collaborator Mickey Hart (drummer for the Grateful Dead) wore an EEG cap while playing and a friend took a VR tour of his brain with an Oculus Rift.

As Gazzaley’s specially targeted games improve, the result could be a little bit like making brussels sprouts taste like Skittles. An engaging set of games you want to play with a few beneficial side effects to boot.