Nick Bostrom’s book Superintelligence might just be the most debated technology book of the year. Since its release, big names in tech and science, including Stephen Hawking and Elon Musk, have warned of the dangers of artificial intelligence. 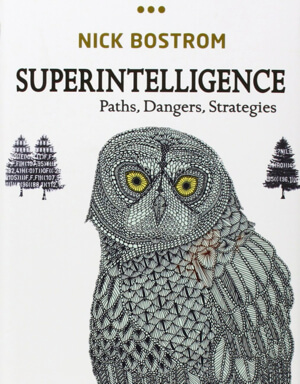 Bostrom says that while we don’t know exactly when artificial intelligence will rival human intelligence, many experts believe there is a good chance it will happen at some point during the 21st century.

He suggests that when AI reaches a human level of intelligence, it may very rapidly move past humans as it takes over its own development.

The concept has long been discussed and is often described as an “intelligence explosion”—a term coined by computer scientist IJ Good fifty years ago. Good described the process like this:

“Let an ultraintelligent machine be defined as a machine that can far surpass all the intellectual activities of any man, however clever. Since the design of machines is one of these intellectual activities, an ultraintelligent machine could design even better machines; there would then unquestionably be an ‘intelligence explosion,’ and the intelligence of man would be left far behind.”

Bostrom says that once this happens, if we aren’t prepared, superintelligent AI might wipe us out as it acts to achieve its goals. He draws the analogy to humans redeveloping various ecosystems and, in the process, causing animal extinctions.

“If we think about what we are doing to various animal species, it’s not so much that we hate them,” Bostrom told IEEE Spectrum. “For the most part, it’s just that we have other uses for their habitats, and they get wiped out as a side effect.”

In one scenario Bostrom outlines, an AI programmed to make as many paper clips as possible might move against humans as it calculates how likely we are to turn it off. Or it might view us as a source of atoms for more paper clips.

Broader and seemingly beneficial goal setting might backfire too.

For example, a machine with the goal of making humans happy might decide the best way to do this is by implanting electrodes in our brains’ pleasure centers—this “solves” the problem, but undoubtedly not to the liking of most implantees.

How then can we reap the vast problem-solving powers of superintelligent AI while avoiding the risks it poses?

One way might be to develop artificial intelligence in a “sandbox” environment, limiting its abilities by keeping it disconnected from other computers or the internet. But Bostrom thinks a superintelligent AI might easily get around such controls—even perhaps, by being on its best behavior to fool its handlers into believing it’s ready for the real world.

Instead, according to Bostrom, we should focus on the AI’s motivations. This is, as outlined before, a very tricky problem. Not least because human values change over time. In short, we aren’t smart enough to train a superintelligent AI—but it is.

Bostrom suggests we program a superintelligent AI to figure out what we would have asked it to do if we had millennia to ponder the question, knew more than we do now, and were smarter.

“The idea is to leverage the superintelligence’s intelligence, to rely on its estimates of what we would have instructed it to do,” Bostrom suggests. (Check out this IEEE Spectrum podcast for a good synopsis of Bostrom’s argument.)

Why think about all this in such detail now? According to Bostrom, while the risk is huge, so is the payoff.

“All the technologies you can imagine humans developing in the fullness of time, if we had had 10,000 years to work on it, could happen very soon after superintelligence is developed because the research would then be done by the superintelligence, which would be operating at digital rather than biological timescales.”