In the decade or so since the Human Genome Project was completed, synthetic biology has grown rapidly. Impressive advances include the first bacteria to use a chemically-synthesized genome and creation of a synthetic yeast chromosome.

Recently, scientists from the MRC Laboratory of Molecular Biology in Cambridge, led by Dr. Philip Hollinger, reported creating the first completely artificial enzymes that are functional. The breakthrough was published in the journal Nature and builds on prior success by the group in creating several artificial nucleotides. 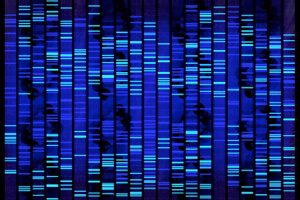 Nucleotides, the building blocks of DNA and RNA, consist of a phosphate group, one of five nitrogenous bases (adenine, cytosine, guanine, thymine, or uracil), and a sugar (deoxyribose in DNA and ribose in RNA).

In their previous studies, Dr. Hollinger’s group investigated whether nucleotides that don’t exist in nature (to our knowledge) could function like natural nucleotides. They designed six artificial nucleotides, keeping the phosphate group and one of the five nitrogenous bases, but switching between different sugars or even entirely different molecules.

The group found they could incorporate the artificial nucleotides, called xeno-nucleic acids or XNAs, into DNA and they behaved like “regular” DNA. The XNAs could be copied, could encode information and transfer it, and even undergo Darwinian natural selection—naturally occurring nucleic acids no longer seemed so special.

Moving forward, the scientists were interested in whether XNAs could function as enzymes, the proteins in cells that regulate biochemical reactions. They got this idea because RNA sometimes functions as an enzyme—the 1982 discovery that RNA could encode information, replicate itself and catalyze reactions filled in a big gap in our understanding of life and how it may have started on our planet.

Dr. Hollinger’s group created four new XNAzymes that could cut and paste RNA just like enzymes called polymerases. One of the XNAzymes even works on XNAs, something we think may have happened with RNA in the early days of life on Earth.

Besides the novelty factor in these experiments, the results suggest exciting possibilities. First, even though XNAs have never been found in nature, it doesn’t mean they don’t exist. 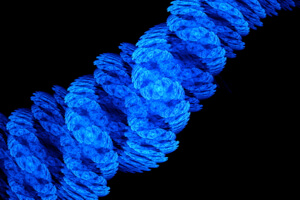 It is possible that on other planets—in our own galaxy or others—life isn’t restricted to DNA and RNA as we know them here on Earth. Under the right conditions, intelligent life that uses XNAs or even more exotic molecules could come into existence. That’s quite an eye-opener and something we need to keep in mind as we probe other worlds for life.

Further, Dr. Hollinger and other scientists also believe that XNAzymes could have therapeutic uses.

Because they are not naturally occurring, our bodies haven’t evolved a system to break down XNAzymes. If researchers could design an XNAzyme that can degrade specific RNA, then targeting an overactive cancer gene becomes possible. They can even be designed to target the DNA and RNA that viruses use to infect a cell and force it to make more viruses.

However, before any of these possibilities are realized, there are many questions to answer.

For example, all the work done by Dr. Hollinger’s group has been in test tubes—can they get similar results in live cells? Also, since the XNAzymes are not degraded by the cell, can they design a system to turn the XNAzymes on and off? An unnatural, long-lasting molecule that cannot be degraded risks serious unintended consequences if there is no system to regulate it.

Whatever becomes of XNAs and XNAzymes as therapeutic agents, the results published thus far are quite exciting. Even if we don’t find alien beings with an XNA genome, will our technology allow us to create whole living systems using these and perhaps other novel genetic material we haven’t created yet?

For further reading and discussion, the researchers behind this work (including Dr. Hollinger) recently participated in a Reddit AMA. Or to talk the merits and risks of creating synthetic life check out our discussion post on the subject.