However, the “expert only” nature of their interfaces and their stratospheric price tags have kept them primarily in the hands of billion-dollar companies. But this is starting to change. Decreasing prices, increasing performance, and the development of far friendlier user interfaces are making these platforms available to any and all. Thus each of these technologies hover on the verge of widespread adoption, and for those entrepreneurs able to stay ahead of this curve, the opportunities are considerable.

If we want to stay ahead of this curve, it helps to understand a little more about the nature of exponential deception. That starts with understanding the powerful biases that inform the Gartner Hype Cycle.

Created by the folks at Gartner Research, the cycle explains the typical pattern a new technology moves through after appearing on the market.

Essentially, after a novel technology is introduced and begins gaining momentum, we tend to envision it in its final form—seriously overinflating our expectations for both its developmental timetable and its short-term potential. Invariably, when these technologies fail to live up to the initial hype, public sentiment for the technology falls into what Gartner calls “the trough of disillusionment.” And when technologies are in this trough, we are again swayed by the hype (this time, the negative hype) and consistently fail to believe they’ll ever emerge, thus missing their massively transformative potential.

Take the personal computer. Back in the late 1960s, when writers like Stewart Brand (who coined the term personal computer) first broached the idea of the PC, it was with a significant amount of “change the world” fervor. Then the machines actually arrived, and all people could do was play Pong. This was the trough of disillusionment, cultural deception at its finest. But imagine being able to take your knowledge of what computers can do today back to the early 1980s—what business opportunities might this have unlocked for you? 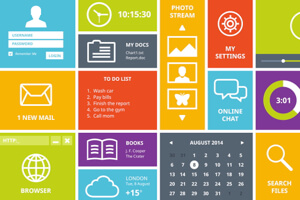 Recognizing when a technology is exiting the trough of disillusionment and beginning to rise up what Gartner calls “the slope of enlightenment” is critical for entrepreneurs. Reading an exponential curve like a road map, experts watch for a number of indicators—the development of best practices, supplier proliferation, secondary financings, among others. But for me, the most important telltale factor is the development of a simple and elegant user interface—a gateway of effortless interaction that plucks a technology from the hands of the geeks and deposits it with the entrepreneurs. In fact, it was exactly this kind of interface that transformed the Internet.

The Internet was born of frustration. In the early 1960s, researchers were titillated by computational possibility yet stymied by geography. Back then, there were only a few major computing centers on the planet. All those researchers who didn’t happen to work at MIT or Caltech—well, they were just out of luck. Then, in April 1963, a computer scientist named J. C. R. Licklider wrote a memos to his colleagues proposing an “Intergalactic Computer Network”—a network that replaced traditional circuit-switching technology with the then new development of packet switching, allowing any researcher with a terminal and a phone line to connect to one of the computing centers they so desperately needed. This was the birth of the Advanced Research Projects Agency Network (ARPANET), the foundational network that has since become today’s Internet.

ARPANET became operational in 1975. It was mostly text-based, fairly complicated to navigate, and used primarily by scientists. All of this changed in 1993, when Marc Andreessen, a twenty-two-year-old undergraduate student at the University of Illinois, Urbana-Champaign, coauthored Mosaic—both the very first web browser and the Internet’s first user-friendly user interface. Mosaic unlocked the Internet. By adding in graphics and replacing Unix with Windows—the operating system that was then running nearly 80 percent of the computers in the world—Andreessen mainstreamed a technology developed for scientists, engineers, and the military. As a result, a worldwide grand total of twenty-six websites in early 1993 mushroomed into more than 10,000 sites by August 1995, then exploded into several million by the end of 1998.

This is the power of an elegant and robust user interface. It’s also a sign that it’s time for an entrepreneur to get in the game. Certainly, deciding when a technology is ripe for entrepreneurial development is not too different from a venture capitalist deciding a technology is ripe for investment. Yet venture capitalists have dozens and dozens of theories about when a technology is actually ripe for investment, so why have I chosen this one indicator above all others? Simple. The creation of a simple and elegant user interface gives entrepreneurs the ability to harness this new tool to solve problems, start businesses, and most important, experiment. Think of the explosion of apps which followed Apple’s creation of the app store. As new entrepreneurs are constantly improving this new interface, they are also further enabling new entrepreneurs—meaning a positive feedback loop of increasing interface innovation develops. It’s a virtuous cycle seen over and over again.

More exciting, it’s exactly these kinds of robust, elegant interfaces that are beginning to show up in half a dozen exponential technologies—meaning there are literally a half-dozen Internet-sized opportunities becoming available to the clued-in entrepreneur.