When 19-year-old Palmer Luckey launched an ambitious virtual reality Kickstarter campaign back in 2012, in no way could he have dreamt up a scenario that involved reawakening a billion-dollar industry, grabbing Mark Zuckerberg as a boss, or fueling a conglomerate arms race between Facebook, Google, Samsung, Sony, HTC, Intel and AMD.

But that’s exactly what happened.

His redesign of virtual reality for the 21st century defied all expectations, raising ten times the initial $250,000 goal. Not only did Luckey’s campaign attract $2.5 million dollars, he also captured a growing market segment yearning for VR. To put it simply—gamers were stoked.

Surprisingly, so too was Mark Zuckerberg.

Zuckerberg became enthralled by VR’s raw potential to disrupt gaming, entertainment and of course, social (imagine Skyping with your friend in China, but instead of chatting with a 2D image, you are both virtually together on the same couch in 3D, immersed in conversation).

Consequently in 2014, less than two years after the Kickstarter, Facebook acquired Oculus for $2.2 billion dollars, and in doing so legitimized the VR industry overnight.

With his track record for sniffing out “what’s next” and a distribution network of 1+ billion people, many have been quick to infer VR has a very bright future. Some analysts are already predicting VR will generate $30 billion in revenue by 2020, and many of Zuckerberg’s Silicon Valley counterparts haven’t hesitated to make similar predictions.

VR is still perhaps one or two years away from going mainstream, but more consumers are being exposed to it than ever before. Advancements in headset technology regularly make front page news on CNN, the Wall Street Journal, Business Insider and Wired. VR has even infiltrated the holy grail of pop-culture, prominently featured (and lampooned) on a recent episode of South Park.

But none of this VIP treatment matters if the product can’t sell. With the consumer Oculus Rift six to twelve months away, some are still on the fence, debating if they should buy the hype.

Realistically, many businesses don’t have time to wait and are already bracing for a future with VR in it. As executives scramble to  invest in their own VR initiatives, many want to know what’s actually happening in the space.

Below are excerpts from Greenlight VR’s July Research Report, which investigate trends on the state of the industry, including VR growth, investments and opportunities.

The Industry Is Expanding Rapidly

The number of companies we consider “pure-play” VR—those with a majority of their revenues derived from selling virtual reality related products and services—has spiked 250% since 2012 (which unsurprisingly coincides with the timeframe of Oculus launching a Kickstarter in ‘12). 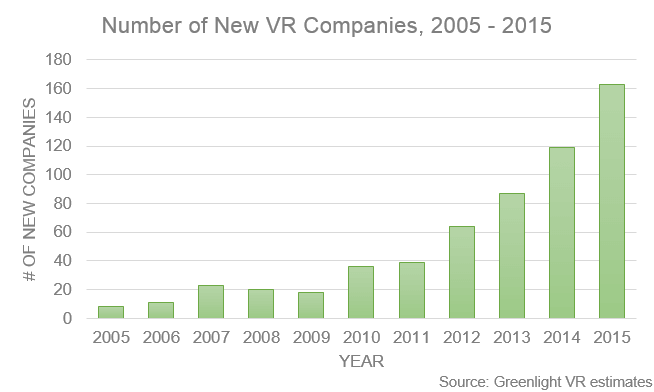 This means a majority of VR companies are early-stage startups. Examining the landscape most companies (27.7%) are less than a year old and almost half (47.9%) of VR companies have between 0-1 years of experience. The bottom line: don’t be intimidated to jump in. Most are just getting their feet wet and experimenting in the space for the very first time. 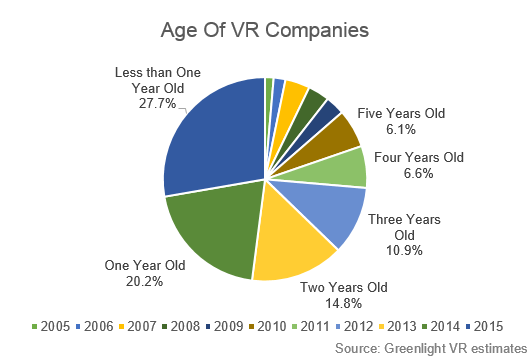 While the United States accounts for nearly 51% of the entire VR landscape, the other 49% of companies we track are spread across 45 different countries and 6 continents. 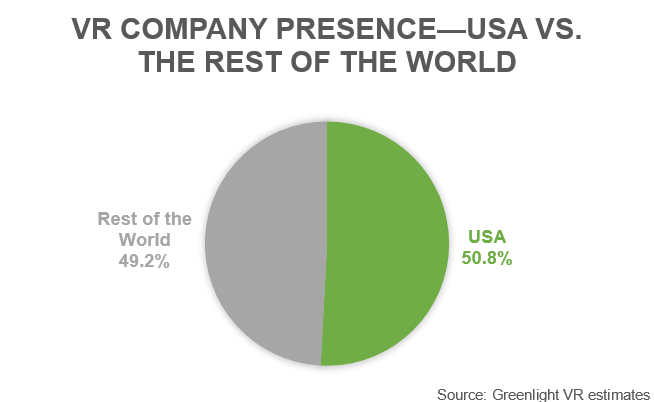 Much of the undiscovered talent (e.g., developers and designers with VR project experience) exists overseas. To that point, the countries with large-scale VR operations beyond the US are the UK and Canada, with emerging communities taking shape in France, Germany, Australia, Spain, Japan, Netherlands, Switzerland, China, Italy and Portugal. 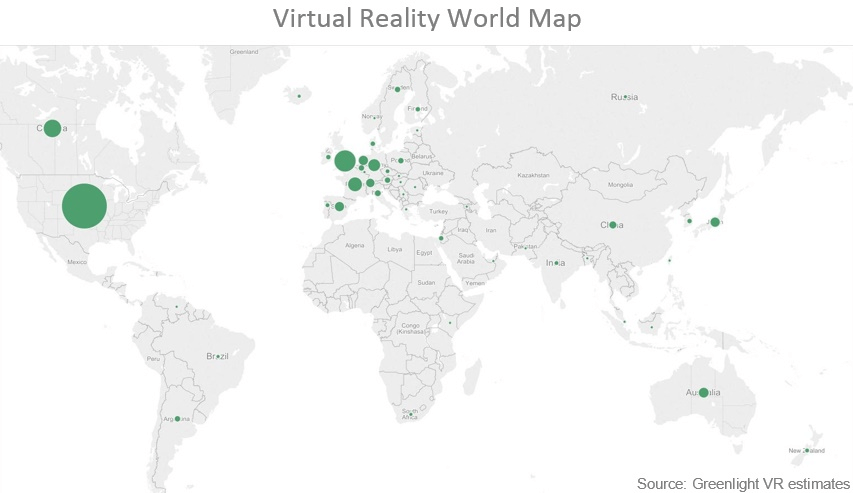 Investment Is Flowing Into VR

In the last five years, virtual reality companies have raised $746 million in venture capital investments. Investors pumped 50% more money into VR startups during the first six months of 2015 than in all of 2014—a good sign for the industry. 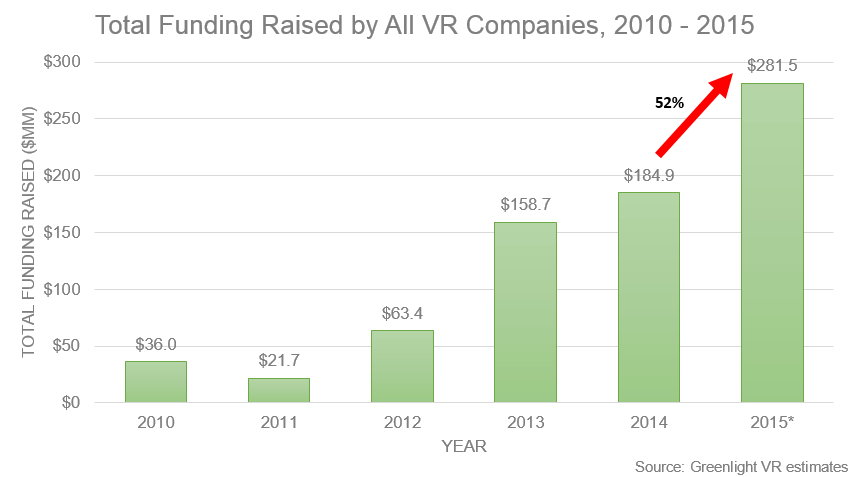 Of the 163 VCs  in the space with at least one investment in a virtual reality company, almost 90% have invested in only one company. While some investors are relaying multiple investments and/or creating VR-specific funds, a majority of investors are taking a “wait-and-see” approach. 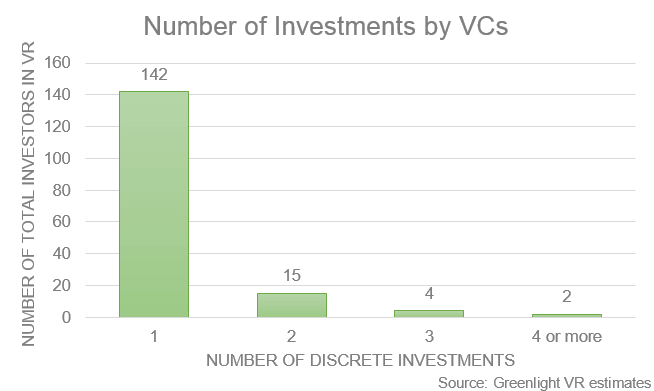 When examining the fundraising landscape in VR, notice a majority of the investments are heavily linked to the gaming/entertainment sectors—which makes sense, as gaming is likely to dominate the industry early. But this space (along with architecture/3D visualization) is highly competitive. For those daring enough to dream big in education, social experiences and/or healthcare, these are highly underfunded areas ripe for disruption. 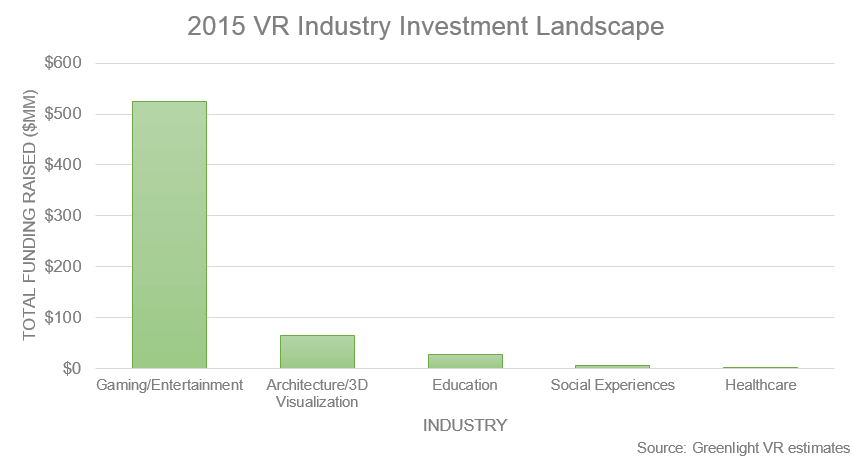 With many curious to explore VR, Greenlight VR created a comprehensive ecosystem map that outlines premier companies and sectors in the space. 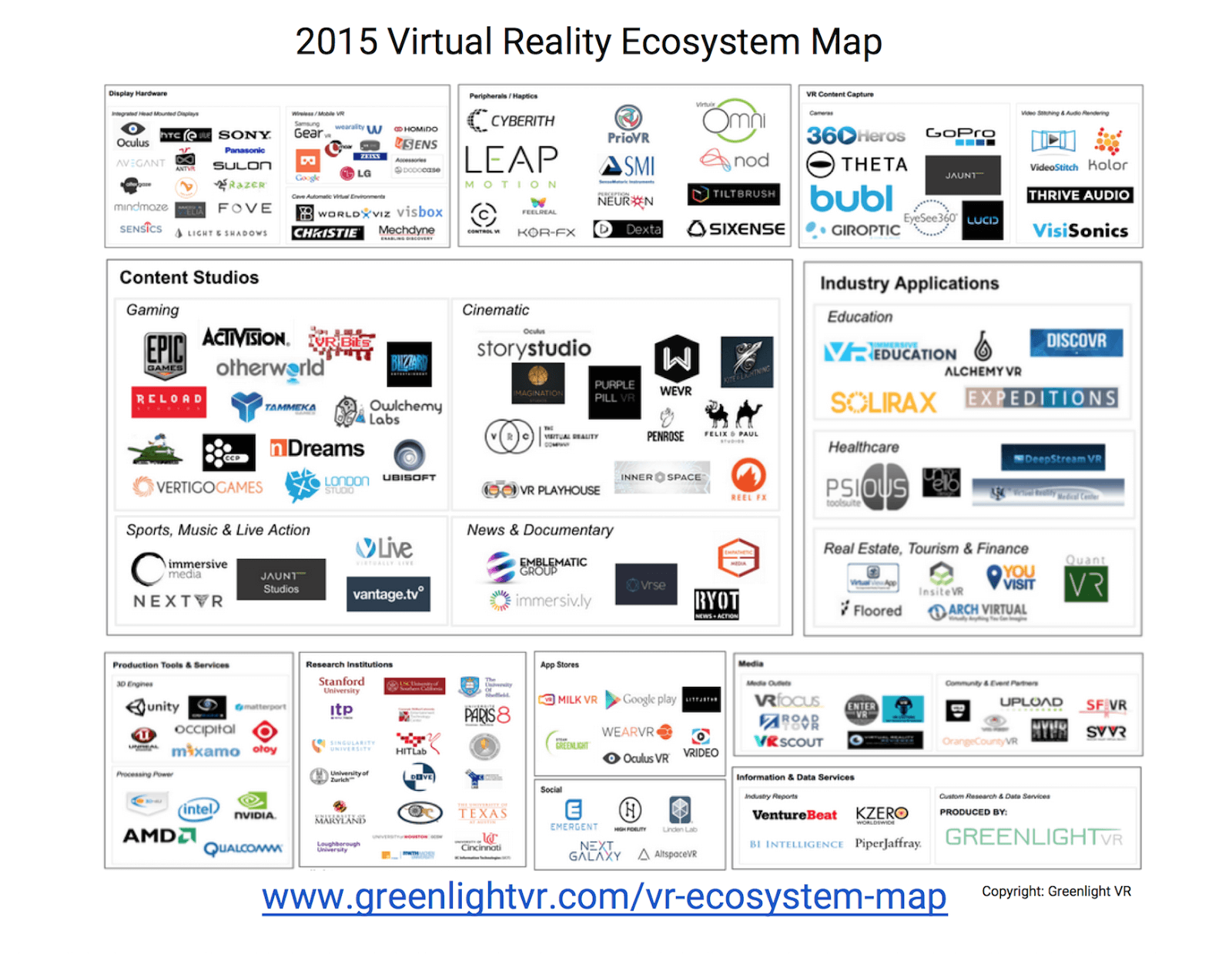 Content (Healthcare): Companies that create games, videos, and applications, which have the explicit purpose of improving consumer’s health  and wellness.

Content (Social): Companies that primarily produce content that is enjoyed in a peer-to-peer social network in VR.

Content (Live/Action, Sports & Music Entertainment): Companies that create sports and musical content which can be either pre-recorded or live broadcast.

Howie is a senior research analyst for Greenlight VR. Greenlight VR is the industry leader in market intelligence for the global virtual reality economy. The company tracks more virtual and augmented reality companies than any other market data company — to date, over 1 million data points on thousands of companies. To learn more, visit www.greenlightvr.com

To get updates on Future of Virtual Reality posts, sign up here.