In 2001, a team of neurologists at UC San Diego began testing a highly experimental treatment for Alzheimer’s disease.

The process sounds far more sci-fi than science: Using tiny pieces of skin taken from the backs of eight patients with Alzheimer’s disease, the team isolated a long-living type of connective tissue cells. Then — using a virus as a delivery system — they genetically modified the cells to synthesize and secrete a potential therapeutic protein known as NGF, effectively turning the cells into little biological drug minipumps. 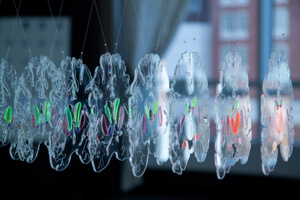 Finally, the team implanted these mutant skin cells directly into each patient’s basal forebrain. Cells in this area are among the first to die from the disorder, and the scientists wanted to see whether NGF could help rescue the atrophy.

Then they waited. For 10 years.

If this sounds crazy to you, you’re not alone. Fiddling with the human genome in a safe and effective way is notoriously difficult, especially when it comes to the brain. Yet against all odds, the gene therapy seemed to work.

Published in the current issue of JAMA Neurology, the autopsy results show that the transplanted cells reliably pumped out NGF in the patients’ brains, which in turn enhanced the cells’ size and their ability to sprout new neural fibers.

What’s more, the treatment rescued vulnerable cells from dying, even if they already showed the trademark signs of Alzheimer’s pathology. In some patients, these beneficial effects lasted almost the entire 10 years after they first received the treatment. 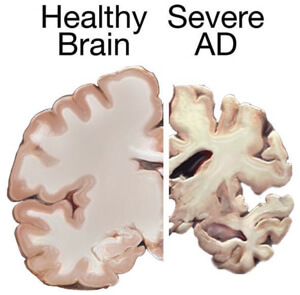 Alzheimer’s disease disrupts the lives of roughly 5.3 million people in the United States. The disease brutally ravages parts of our brains that underlie cognitive processing and memory encoding, taking away patients’ most treasured memories and in some cases, their lives. Despite dedicating enormous amounts of time, money and effort to finding an effective cure, almost all new drugs have failed clinical trials.

As of now, according to the Alzheimer’s Association, the disease can’t be effectively slowed, stopped or prevented.

Despite the bleak therapeutics landscape, studies using animal models of the disease have begun to produce a list of potential treatments, with NGF being one of the most prominent candidates. NGF, or nerve growth factor, is a large protein that has been repeatedly shown to increase the survival of the basal forebrain neurons in petri dishes and animals. Whether it worked in humans was anyone’s guess.

The UC San Diego team decided to tackle the question head on.

The main problem was how to deliver the protein into the brain: NGF is far too large to pass the blood-brain barrier, and the protein can act on other neurons, which leads to pain, severe weight loss and other side-effects. The team turned to ex vivo gene therapy, that is, transplanting NGF-expressing skin cells back into one side of the brains of patients from whom they were isolated.

Some patients lived only a year after the surgery; others survived for more than 10 years. Nevertheless, when doctors autopsied the brains, they found that everyone had responded positively to the therapy.

In the treated half of the brain, cells around the implantation looked healthy, vigorous, sprouting long nerve fibers that allowed them to connect and communicate with each other. Some cells showed obvious signs of Alzheimer’s pathology — protein clumps in their cell bodies and all around them — yet still extended their fibers toward the NGF source and maintained a healthy size. When scientists deciphered the neurons’ inner molecular chatter, they found that the cells had activated pro-survival signals that boosted their resilience to stress.

In stark contrast, neurons in the non-treated side of the brain were severely battered and broken by the disease.

These promising results were also found in two other patients, who received direct injections of modified viruses containing the NGF gene directly to their basal forebrains. Compared to skin transplants, direct viral infection allows the gene to express longer in the brain, explained Tuszynski.

Despite the use of viruses, the therapy was safe: none of the patients showed signs of developing a brain tumor or other toxic reactions to the implantation.

Testing safety was the main point of the trial, explained the authors in their paper. Unfortunately, gene therapy has a long history of causing severe immune reactions that render the treatment useless, or in some cases, harmful to the patient.

Yet when safe, the treatment has an advantage over any chemical drug: rather than bathing the entire brain in a potentially harmful drug concoction, gene therapy is extremely targeted, in that it can be restricted to a specific disease-plagued cell type or brain area, without interfering with nearby healthy cells.

There are other NGF-like “nurturing” proteins that may be neuroprotective, said Tuszynski. This study suggests that we can use the same gene therapy strategy to test whether those proteins — either alone or in combination with NGF — safeguard the brain against degeneration.

Do the observed cellular benefits translate into decreased clinical symptoms in patients? That’s the question that Tuszynski and his team are trying to answer with a Phase II randomized control study in 50 Alzheimer’s patients spread across 11 research centers across the United States. The study is wrapping up; although too premature for solid conclusions, the scientists are seeing increases in brain metabolism and other signs of symptom reversal in some of the patients.

Sure, the therapy is invasive, acknowledged Tusynski. Yet he strongly believes that a one-time surgery beats having to remember to take a pill everyday, especially when the patient’s memory is in decline.

“If you know you have a disease that robs you of the essence of your intellect, will you undergo a three-hour operation? Pardon the expression, but that seems like a no-brainer.”