In the last few years, experimental robotic limbs have made great advances, promising people who are paralyzed or have lost a limb the return of some sorely missed freedom.

In 2012, a man with one leg took the stairs all the way to the top of Chicago’s Willis Tower on a thought-controlled prosthetic limb. Meanwhile, a paralyzed woman directed a robotic arm with her thoughts to bring a straw to her lips for a sip of soda. 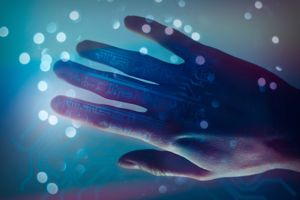 Now, the technology is beginning to provide a sense of touch too. According to a recent Darpa press release, a paralyzed 28-year-old man reported a “near-natural” sense of touch from a sensor-laden robotic hand wired to a brain implant.

Touch is critical to easy, intuitive operation of an artificial limb. And experimental prosthetics for amputees are already becoming a two-way street—allowing thought-controlled movement and sending back a sense of pressure in return.

Demonstrating the power of touch, a video from last year showed a patient, Igor Spetic, performing the delicate task of plucking stems from cherries. Without a sense of touch, Spetic destroyed or damaged 9 of 15 cherries. With touch, he only crushed one.

In the case of paralysis, however, robotic arms wired directly to the brain via an implant have been primarily one-way devices—allowing action but not yielding sensory information. This is why the Darpa announcement is so exciting.

Robotic thought-controlled prosthetic limbs for amputees are controlled by the brain indirectly using healthy nerves and muscles in the stump. When a person thinks about certain movements electrodes pick up the nerve and muscle activity, recognize patterns, and translate thought to action—close hand, open hand, etc.

If a person is paralyzed, however, the only way to link up to a robotic arm is directly through the brain by way of an implant. In the Darpa project, electrode arrays were placed onto a paralyzed volunteer’s sensory and motor cortices. The former manages our sense of touch and the latter controls physical movement of the body. 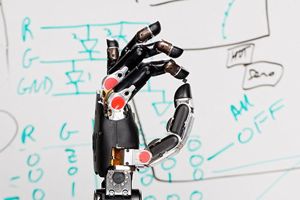 The implant was then wired to a robotic hand built by the Applied Physics Laboratory at Johns Hopkins.

Using advanced pressure sensors, the hand converts physical sensations into electrical signals that are communicated to the brain through the brain implant.

The volunteer, who was paralyzed by a spinal cord injury ten years ago, was not only able to control the hand, but also reported a sense of touch.

To test this, the researchers blindfolded him, touched the prosthetic hand’s fingers, and asked which they were touching. With near perfect accuracy, he correctly identified which finger was being touched—an experience he said was like his own hand being touched. He could even tell the difference between a one- and two-finger touch, at one point asking the researchers if they were trying to trick him.

“Prosthetic limbs that can be controlled by thoughts are showing great promise, but without feedback from signals traveling back to the brain it can be difficult to achieve the level of control needed to perform precise movements. By wiring a sense of touch from a mechanical hand directly into the brain, this work shows the potential for seamless bio-technological restoration of all function.”

For now, Darpa is keeping details on the work under wraps pending peer review and publication of a paper describing it.

Although promising, such work remains expensive and firmly limited to the lab. Further, invasive surgery and wired brain implants are not an ideal solution. And limited to pressure, the sensory input remains largely rudimentary and one-dimensional.

However, even simple pressure is a very useful advance—as demonstrated by those cherries—and it isn’t likely to end there.

For now, however, it’s one step at a time. And adding a sense of touch is a big one.