This Is eSports: Where Pro Gamers Are YouTube Heroes and Entertainment’s New Rock Stars

As of last year, student athletes in the United States began attending universities on scholarship to play, get this, video games. I did not make this up, and if your forehead reflexively crunched in confusion, welcome to generation gaps in the ever-changing digital age.

According to a research report by business strategist Michael Wolf, a professional video game league in the US could become a $1 billion industry by 2018 and eSports will be a $4 billion industry globally the same year. (For comparison, the NHL brings in revenues of $3.8 billion.) 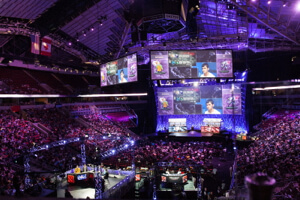 I first learned about the startling growth of video game entertainment from an ESPN The Magazine cover story profiling a 25-year-old Swedish gamer known by his fans as PewDiePie. If you don’t recognize the name, not to worry. It likely just means you’re not aged 13 to 17.

PewDiePie (pronounced PEW dee-pie), beloved by fans for his ranting-commentary as he plays video games, is one of the most recognized names on the planet among internet-connected teenagers. As a survey in Variety recently showed, this kid has a higher Q score—a measurement of how recognized a brand or celebrity is—than Taylor Swift, Leonardo Dicaprio, or any other Hollywood celebrity.

PewDiePie is leading a massive global shift in which unfiltered internet personalities can become cultural icons; free of publicists or the carefully managed media machines typically used to shape an entertainer’s brand. Once only the wealthiest media studios had access to the hearts and minds of billions, but now, so do makeshift bedroom studios and nonsense-spewing gamers, the world over.

While PewDiePie is more entertainer than e-athlete, he exists within the growing cultural landscape of eSports. Yes, that’s a fancy way of saying “kids playing video games,” but ignore this vast cultural phenomenon at your own risk.

At a recent panel presentation to launch the Future of Sports—a research project commissioned by the owners of the NHL’s Boston Bruins and produced by digital agency Attention Span—I was given the task of introducing the audience to the statistic that has most blown my mind in recent months: PewDiePie now has 39 million subscribers (more than Katy Perry, Justin Bieber, and Beyonce combined) and 10 billion video clicks. (That’s just insane. Please join me in a reflective moment to process that……..) 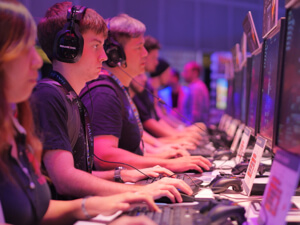 Figuring that a room of sports and entertainment executives have certainly tracked this media trend, and since ESPN had already covered the story, I assumed my PewDiePie-related insights would impress no one.

Surprisingly, not a single advertiser, broadcaster, team employee, or top NHL league exec had heard of this kid.

The rise of eSports and video game entertainment offers an early case study in the looming disruption of an industry that doesn’t yet see it coming.

Because emerging technologies develop in a steady yet deceptive early phase, they often escape the notice of those vulnerable to disruption. Taxis didn’t consider a high-end car service for 1% elites to be a threat until Uber emerged as a worldwide sensation in just a few years.

Paul Saffo, a forecasting whiz at Stanford University, often tells businesses at Singularity University that they should scan for outlier indicators to spot the early tremors of change.

Nomenclature: For starters, the eSports community doesn’t refer to their activity as “video games.” It’s called eSports. Gamers self-identify as athletes, and like athletes, they spend their lives devoted to their sport, training for hours a day.

Money: These eGamers also make pro-athlete money. Some tournaments pay out over $10 million to the winning team. Winnings plus sponsorship dollars have created an entire generation of teenage millionaire-gamers.

Viewership: Perhaps the biggest indicator of this sweeping global movement in the making occurred in Korea—where 40,000 fans filled Seoul’s World Cup Stadium to watch last year’s final for the popular eSport video game “League of Legends.” If that wasn’t surprising enough, another 27 million people tuned in over the internet. That’s a higher viewership than the NBA finals earned. If you want to see this world for yourself, VICE has produced this fantastic short documentary on the eSports phenomenon in Asia.

The sports industry may have taken note of the eSports trend in recent weeks. Peter Scott, VP of emerging media at Turner Sports, who shared the panel stage in Boston, was on hand to announce that TBS, a popular US basic cable station, had plans to broadcast live gaming contests during primetime next year.

There are also big opportunities for entertainment studios and sports franchises to join this emerging ecosystem by sponsoring, investing in, and building out the video game landscape. Indeed, video games might even help establish larger fanbases for traditional sports in certain segments, as was the case with Electronic Arts’ FIFA franchise. The growing popularity of soccer in the US is in part credited to the popularity of the video game among millennials.

With the rapid pace of change in the entertainment business, executives should take note of the curious behaviors of the digitally native youth—or they could find themselves on the sidelines as kids plaster bedrooms with posters of video gamers instead of basketball players and movie stars.

And as for parents: Well, they can’t really argue video games are wasting their kids time anymore. Those games might just earn their kids a college education.