In the buzz over the Tesla autopilot update, a lot of commentary has appeared comparing this autopilot with Google’s car effort and other efforts and what I would call a “real” robocar — one that can operate unmanned or with a passenger paying no attention to the road. We’ve seen claims that “Tesla has beaten Google to the punch” and other similar errors. While the Tesla release is a worthwhile step forward, the two should not be confused as all that similar.

Tesla’s autopilot isn’t even particularly new. Several carmakers have had similar products in their labs for several years, and some have released them to the public, at first in a “traffic jam assist” mode, but reportedly in full highway cruise mode outside the USA. The first companies to announce these were Cadillac with the “Super Cruise” and VW’s “Temporary Autopilot” but they delayed that until much later.

Remarkably, Honda showed off a car ten years ago doing this sort of basic autopilot (without lane change) and sold only in the UK. They decided to stop doing that, however. 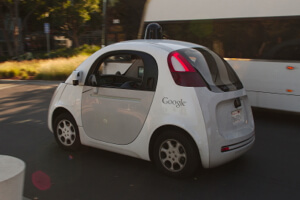 That this was actually promoted as an active product ten years ago will give you some clue it’s very different from the bigger efforts.

These cruise products require constant human supervision. That goes back to cruise control itself. With regular cruise control, you could take your feet off the pedals, but might have to intervene fairly often either by using the speed adjust buttons or full control. Interventions could be several times a minute. Later, “Adaptive Cruise Control” arose which still required you to steer and fully supervise, but would only require intervention on the pedals rarely on the highway. A few times an hour might be acceptable.

The new autopilot systems allow you to take your hands off the wheel but demand full attention. Users report needing to intervene rarely on some highways, but frequently on other roads. Once again, the product is useful if you only intervene once an hour, it might make your drive more relaxing.

Now look at what a car that drives without supervision has to do. Human drivers have an accident around every 2,500 to 6,000 hours, depending on what figures we believe. That’s a minor accident, and it’s after around 10 to 20 years of driving. A fatality accident takes place every 2,000,000 hours of driving — around 10,000 years for the typical driver. (It’s very good that it’s much more than a lifetime.)

If a full robocar needs an intervention, that means it’s going to have an accident, because there is nobody there to intervene. Just like humans, most of the errors that would cause an accident are minor. Running off the road. Fender benders. Not every mistake that could cause a crash or a fatality causes one. Indeed, humans make mistakes that might cause a fatality far more often than every 2,000,000 hours, because we “get away” with many of them.

Even so, the difference is staggering. A cruise autopilot like Tesla and the others have made is a workable product if you have to correct it a few times an hour. A full robocar product is only workable if you would need to correct it in decades or even lifetimes of driving. This is not a difference of degree, it is a difference of kind. It is why there is probably not an evolutionary path from the cruise/autopilot systems based on existing ADAS technologies to a real robocar. Doing many thousands times better will not be done by incremental improvement. It almost surely requires a radically different approach, and probably very different sensors.

To top it all off, a full robocar doesn’t just need to be this good, it needs a lot of other features and capabilities once you imagine it runs unmanned, with no human inside to help it at all.

The mistaken belief in an evolutionary path also explains why some people imagine robocars are many decades away. If you wanted evolutionary approaches to take you to 100,000x better, you would expect to wait a long time. When an entirely different approach is required, what you learn from the old approach doesn’t help you predict how the other approaches — including unknown ones — will do.

It does teach you something. By being on the road, Tesla will encounter all sorts of interesting situations they didn’t expect. They will use this data to train new generations of software that do better. They will learn things that help them make the revolutionary unmanned product they hope to build in the 2020s. This is a good thing. Google and others have also been out learning that, and soon more teams will.