Only 12 people—all Americans—have put their boots on the Moon. Today, however, NASA has no plans to send humans back to our pockmarked satellite. Instead, its space pioneers will shoot straight to Mars (and wave to the Moon as they pass it by).

Other countries, though, would like a chance to leave some dusty footprints on the Moon. And although some think another Moon mission represents a step back, solid reasons exist (beyond footprints) to do a lunar sojourn or two before heading for the Red Planet.

In October, Russia announced it wants to build a base on the Moon.

They are sending a rover there in 2020 to check out the South Pole Aitken Basin, where water-ice caps the ground. This mission, called Luna 27, will hunt for resources and suss out the site as a potential home for the colony.

To build that colony, Russia has asked, “Hey, do any other nations want to team up?” After all, space is expensive, and space is also not a country—it’s a place where borders don’t exist (at least not yet)—so global collaboration breeds goodwill and makes a mission more likely to actually happen.

The European Space Agency (ESA) plans to take Russia up on their request, a decision that they’ll ratify in early 2016. They’ll contribute Pilot, an instrument to guide the lander to the ground using lasers; a drill that will whir into two meters of rock and ice; and the pocket-sized lab that Luna 27 will carry to analyze material the sampler scoops up.

And it seems likely ESA would team up with Russia after the recon mission to spool up that Moon colony.

At the National Space Symposium in April, the agency’s chief, Johann-Dietrich Wörner said, “It seems to be appropriate to propose a permanent Moon station as the successor of ISS.” He proposed that, like the space station, the Moon station also be international, with countries contributing people, talent, and resources according to their abilities.

China has its own designs. In 2013, it launched Chang’e 3, complete with lander and orbiter, and plans to launch a lander called Chang’e 5 in 2017. It will bring back two kilograms of samples (a puppy’s mass of material).

The US hasn’t expressed desire to join Team Moon, and it likely won’t: With a limited space-exploration budget, and a stated goal of going to Mars, NASA doesn’t have resources left for other projects (in fact, it may not even have enough for Mars). And it is actually forbidden, by an old law, from dealing with China in space-based endeavors.

But aside from money matters, going to the Moon doesn’t mean not going to Mars.

Europe, Russia, and China all plan to visit the Red Planet’s canyons and dunes sometime in the future. But going to the Moon is faster—in terms of trip planning and the number of times the crew asks “Are we there yet?” before arrival—and, because of that, cheaper. 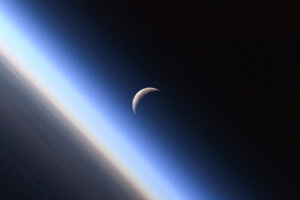 Further, because the timescales and the budget numbers are both smaller, the missions are more likely to happen (maybe even on time). Also, going to the Moon is a stepping stone to Mars. Launches to Mars could actually take place from the Moon—a lower-energy feat relative to Earth launches due to the Moon’s lesser gravity—after the colony turns industrial (which is, admittedly, a ways off). And astronauts and engineers can learn how to build a long-term space settlement, which (turns out) no one has ever done before.

However, the more resources agencies invest in getting to the Moon (and staying there for long periods of time), the fewer they have left to allocate for a future trip to Mars, an expensive endeavor. And the general American attitude of “been there, done that” has something to it. We have been there. We may not have done all of that, but we could go try to do it somewhere else, farther away: on a new frontier.

That kind of novel, dreamy goal inspires people, and not without reason. We have the technological capability to figure out how to make a human Mars mission work.

So, perhaps all together, in a global collaboration of building blocks, brains, brawn, and bitcoins, humans could accomplish both of their lofty space-travel goals and, in the coming decades, live on three spheres in the solar system.