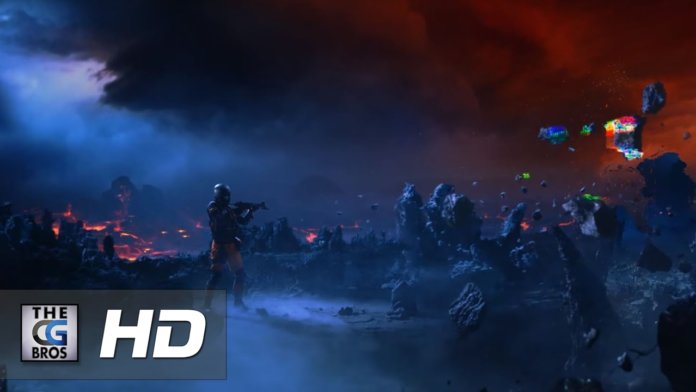 A generation of burnt-out, washed-up VR junkies losing touch with reality and surviving only to sustain their virtual existence.

That reality is where the haunting sci-fi short film, Uncanny Valley, begins. Written and directed by Argentine filmmaker Federico Heller, the short is already slated to be developed into a feature film.

We are introduced to several men who are squatting in a decaying building. In documentary style, these characters tell us about their lives and addiction to VR. One tells us he’s online for 17 hours a day, averaging “100 kills” a day in the immersive first-person shooter game that has become his life.

Another admits, “I haven’t left this house in quite a few years.”

These VR junkies depend on food printers for their sustenance and never have to leave their dwelling. They enter the virtual world via a thumb-sized device that attaches between the nostrils.

These are the outcasts of society. They find great solace in the virtual world where, by their own admission, they can feel free to express their anger in a way that’s not dangerous. In VR, they are free to do things that would get them locked up in the real world.

In a moment of ironic foreshadowing, one tells us, “I don’t feel comfortable around people, I don’t really know what I should say or do. Game play is just simpler. There’s no people. Just targets.”

The film tackles two frightening ideas: the consequences of addiction to immersive gameplay, and the even more frightening notion that the game is not merely a game.

It’s doubtful that we will end up with a generation of junkies addicted to VR, as portrayed in Uncanny Valley. It’s more likely that VR will unleash greater opportunity for creativity and collaboration than this film’s version of the future. However, we know that this kind of addiction is very real, and we have yet to understand how significant time spent in immersive virtual environments could affect children as well as adults.

Still, in another way, it’s possible we’re already living in a version of this frightening future.

It’s no secret warfare is becoming more and more automated. Drones are just one example of technology that can be controlled remotely to survey and kill. A few years ago, the Atlantic published “Playing War: How the Military Uses Video Games,” a piece that chronicles the history of the military’s connection with the video game industry.

“The military has used video games ‘at every organizational level for a broad array of purposes’….It’s had three big aims in this: to recruit soldiers, to train them, and, most recently, to treat their psychological disorders, such as PTSD…The military offers funding and technical expertise to game and computer developers, and, in exchange, they give it proprietary technology and technical consulting.” – Hamza Shaban, The Atlantic

Uncanny Valley, with its take on the potential dark side of VR, stays with you well after you finish watching it. Like all good sci-fi stories, it pulls back the curtain on a potential future and shows us a place we should be wary of. Check out the full film below, and stick around for the end. It’s worth it.