On Friday 8 April 2016, SpaceX’s Falcon 9 rocket launched a mission to deliver a spacecraft called Dragon with its payload of supplies and experiments into a trajectory towards the International Space Station (ISS). Most remarkably, the first-stage booster then landed on a ship (see below).

This is no easy task. Think back to 1969 when the Apollo 11 mission delivered three astronauts to the moon. Neil Armstrong and Buzz Aldrin walked on the moon while Michael Collins piloted the command module in lunar orbit. All three returned safely to Earth.

The first stage of the huge Saturn V rocket that launched them into space burned for about three minutes and then crashed into the ocean. The second stage burned for a further six minutes, taking the craft into near-Earth orbit. It too was jettisoned and then burned up during its descent to Earth. The third stage burned for nine more minutes to send the astronauts towards the moon—again burning up on re-entry. The Saturn V rocket, at a cost of $6 billion in 1969, was completely lost.

On the astronauts’ return, only the command module splashed down in the Pacific Ocean. Of the 140 tons of metal that were launched, only five tons returned to earth. And at launch, the mission carried a staggering 3,000 tons of fuel…more on this later. Just imagine the cost saving if the Saturn V had been able to return to Earth almost intact—and then land itself to be used on another mission. Well, as the latest SpaceX landing proves—along with the reusable technology being developed by Blue Origin—that dream is becoming reality.

Of course, there have been reusable spacecraft before. The space shuttle was intended as a reusable spacecraft. The orbiter returned to Earth landing like a conventional aircraft, and the two solid rocket boosters could be recovered from the sea. Only the huge orange external tank would burn up, but getting the spacecraft ready for the next flight was slow and expensive.

The SpaceX philosophy is that the majority of the rocket can be rapidly recovered, refueled and reflown, making for significant cost savings. Fuel is less than half a percent of the cost of the mission, so there is potential to decrease the cost of getting to space dramatically.

But what of the rocket science? Well, the ISS is in “near-Earth orbit,” at an altitude of about 400km. This is less than the distance from London to Paris, albeit straight up. It is orbiting at a speed of about 7.7km/s—it only takes about 90 minutes to go once around the Earth.

So, how much energy does it take to deliver 1kg of payload to the ISS? First, think of kinetic energy (KE)—yes, you learned this at school. At 7.7km/s, the KE per kilogram works out at about 30MJ (megajoules). But you also need to consider gravitational potential energy (GPE)—yes, you did this at school, too. The force of the Earth’s gravity doesn’t change very much over this short distance upwards given that the Earth’s radius is 6,400km. So it’s easy to work out that the GPE needed to lift 1kg up to 400km is only about 4MJ. This is small compared with the 30MJ of KE required.

But not only do you need to get your payload to 7.7km/s, you have to carry the fuel in your tanks as well. Thanks to Konstantin Tsiolkovsky’s “ideal rocket equation,” however, we know that liquid fuels, which have a faster gas jet speed, are more efficient than solid fuels. Essentially, by using liquid fuel, each 1kg of payload needs a minimum of 4.5kg of fuel to reach a speed of 7.7km/s, while with solid fuel you’d need more than 20kg—and this is before taking the rocket mass into account. This is a very good reason why rocketeers, including SpaceX, prefer to use liquid fuels; with a high gas jet speed, the launch mass is much less.

The Secret of SpaceX

So how does SpaceX’s rocket work? The Falcon 9 is a two-stage launch vehicle. Each stage uses a liquid fuel with liquid oxygen (very similar to the kerosene and liquid oxygen fuel used in the Saturn V—chemistry hasn’t changed in 50 years). Falcon 9’s first stage “booster” is by far the largest and most expensive component of the launch mass and it makes sense to try to recover it for reuse—it’s no good to have it splash into the sea because the resulting damage and corrosion would render it useless.

And so SpaceX has developed the Falcon 9 booster so that it can land on a ship. The idea is that shortly after main engine cutoff and stage separation, the booster flips over and directs itself towards an unmanned drone ship that is waiting as a landing pad.

During its descent, the booster reaches speeds of around 1,000m/s (double this after more adventurous geostationary missions) but its fins and engines control the speed and direction of the Falcon, slowing it down as it approaches the Earth. At the last minute, four legs then deploy—and it makes a soft landing at a speed of less than 6m/s. All of this delicate navigation is performed by onboard computers and inertial navigation systems. The landing is so fast that no human could react quickly enough to ensure a smooth touchdown.

To make things trickier, the ship is pitching, rolling and heaving in the sea. It’s hard enough for pilots to land on an aircraft carrier—Falcon is a tall slender column some 20 stories high. Once the Falcon has landed, the legs lock out rigidly. In one of the earlier Falcon missions, one of the legs failed so even though the landing was a success the Falcon fell over shortly after, resulting in a huge conflagration. But that’s why they use an unmanned drone ship as a landing platform—no-one gets hurt. Of course, it’s easier to land on land—and the Falcon does this if the mission flies over land. But the ability to land at sea adds flexibility.

Falcon 9 and Dragon are paving the way for a new generation of low-cost reusable spacecraft—and SpaceX is already developing Dragon to launch and return up to seven astronauts into orbit and beyond. Perhaps next, there’ll be a refueling base on the moon? Then Mars is an awful lot closer.

The flexibility offered by reusable vehicles is the stuff of science fiction—the classic movie Star Wars and more recently The Martian and Interstellar are nothing without spaceships that launch at the push of a button. We’re not there yet, but with spacecraft that can hop around like aircraft, then anything is possible.

The author wrote this piece with the assistance of one of his former Trinity students, Lars Blackmore, who now works for SpaceX as Principal Rocket Landing Engineer. Lars graduated with his MEng from Cambridge in 2003 and a PhD from MIT in 2007. He is now responsible for landing Falcon 9. 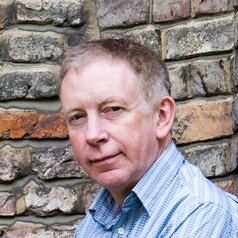 Hugh Hunthttp://www.eng.cam.ac.uk/profiles/hemh1
Dr. Hugh Hunt is a Reader in Cambridge University's Engineering Department and recipient of the Royal Academy of Engineering Rooke Award for the public promotion of engineering. His research interests include railway noise and vibration, gyroscopes and boomerangs, wave power, vibration of bell towers, and renewable energy. He is Keeper of the Clock at Trinity College Cambridge.
RELATED