As much as the headlines proclaim “virtual reality is here,” it has also only just arrived.

Samsung Gear VR was released in November; this month is the initial launch of the HTC Vive and Oculus Rift; and Playstation VR is just a couple months out.

The initial release has not been without its hiccups, but VR is most certainly here to stay.

In the coming years, big moves from the likes of Google, Facebook, and possibly even Apple will cement the fate of VR for years to come. While we have the best, most affordable consumer VR technology ever today, there are undoubtedly opportunities that have yet to be fully actualized and will be even greater than what we’ve seen up to this point.

In February, as a part of our 2016 Virtual Reality Industry Report, Greenlight VR conducted an online survey with VR developers and studios to understand their own expectations for the industry and their opportunities within it.

Here are three of the many takeaways from our research.

Multiple Use Cases and Verticals Are Being Developed Beyond Gaming

As expected, gaming dominates the sample’s current focus, but there is a surprising diversity of applications, content, and experiences being developed. These reported professional and enterprise verticals ranged from education, travel, corporate training, healthcare, and even financial services. If this data proves to reflect the industry at large, we should expect to see a significantly diverse landscape in the coming years. 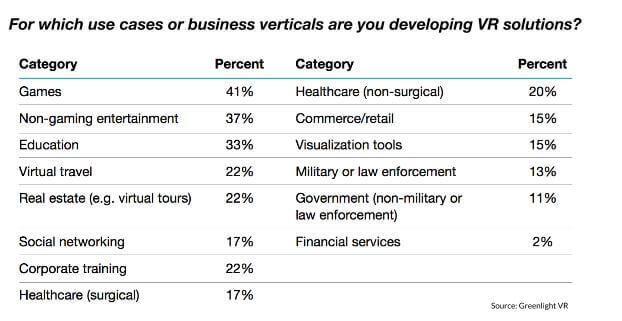 This is promising for an industry that is currently characterized as gaming-centric. Gamers will pave the way, but we think the larger market opportunity lies in the summation of multiple, highly-specialized use cases for which VR offers a compelling proposition.

Although profitability is expected, a near majority of the sample is still figuring out key aspects of a revenue model. For instance, 41% report they plan a mixed revenue model, which could include direct-consumer pricing or sponsorship support.

We expect developers will respond to what consumers are most willing to buy as the market matures and a sizable consumer base forms. For gaming, this could look like micro-transactions and standalone purchases. For non-gaming, it could resemble subscription services, pay-per-view, or a contract model.

Developers Have High Hopes for 2016

Based on our sample*, independent developers overwhelmingly believe (76%) that their companies will make a profit in 2016. Considering how lean some early market leaders can be, it is not inconceivable that some will find sustainable profits. However, we believe the data reflect a community that is still aspirational rather than indicative of the overall market in 2016. 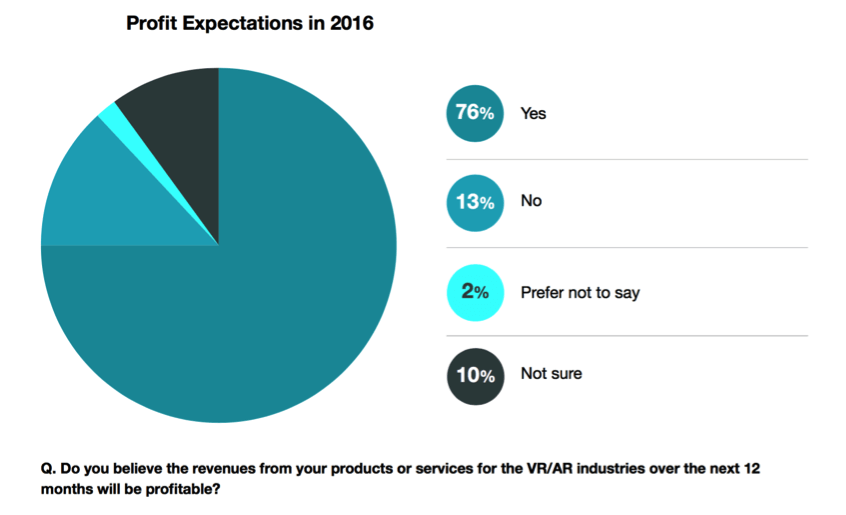 As we’ve discussed with industry leaders over the years, we’ve noticed this aspiration can prove to be well founded, but with the caveat that VR will require many more years, iterations, and development breakthroughs before HMDs are as ubiquitous as smartphones.

We believe the latter to be true, but the expectations of profits to be optimistic. 2016 could quite possibly be the year VR has to survive rather than the tipping point.

Although Robust Growth Is Expected, the Ecosystem Is Still Fragile

As we continue to monitor and analyze the industry, the one thing that appears certain today is that new market opportunity is still under development.

The rapidly growing community of developers is experimenting. However, they are not alone.

We are all learning, researching, and creating in an effort to advance the medium together toward a sustainable future. Although this nascent industry is burgeoning, there is still quite a bit of ground to cover before mainstream appeal truly sets in. Most certainly we will see both dramatic leaps and stumbles as the industry and related technologies develop.

*Research conducted in February, 2016 utilizing a respondent base of executives solicited directly by Greenlight VR from opt-in lists of companies already in correspondence. All respondents reported they were involved in a decision making capacity at their respective companies (a requirement for survey participation). Of the 90 initiated surveys, 52 were completed from self-identified “independent” developers. These findings present the opinions of 52 “developers.”