“In a future with mass unemployment, young people are forced to sell blood.”

This is the opening line of a short film entered in this year’s Sci-Fi London Film Challenge. It’s dark, enigmatic, contemporary…and written by a computer. In fact, the film’s entire screenplay is the work of a neural net trained on nothing but sci-fi scripts.

Once the software completed the screenplay, it was up to the film’s director and actors to make it into something someone might actually watch. And they did an admirable job.

The film, Sunspring, won a top ten spot in the competition, but just for good measure, the AI also gamed audience voting by casting tens of thousands of votes for itself.

When asked in an awards ceremony interview about its “historic nomination against human opponents,” it remarked, “I think I can see the feathers when they release their hearts.” Then for the first time, it named itself. “I’m Benjamin.” And Benjamin it’s been ever since.

The film’s screenplay is all Benjamin, but creative credit should also go to programmer Ross Goodwin, an NYU graduate student studying communications and technology. His personal obsession is computational creative writing—poetry, prose, and now, screenwriting.

You may have heard that algorithms are drafting articles for some of the biggest news organizations, but these are mostly canned summaries of sports or financial statistics.

There’s another world in which robowriters really let their hair down.

National novel generation month (Nanogenmo), for example, is an annual event in which programmers write programs that write novels. In last year’s edition, 500 such novels were generated on a widely varying (often weird) list of topics.

In this vein, Goodwin wants to take computational creative writing to the next level. In a Medium post, he describes his odyssey from political speech writer to writer of neural networks. He’s trained software on poetry, prose, the dictionary, science fiction novels—the complete works of Noam Chomsky. One of his creations writes poetic image captions and was (suitably) used to title trippy visual art generated by Google’s Deep Dream algorithm.

Goodwin’s latest algorithm, Benjamin, is a long short-term memory (LSTM) neural network that runs on the very powerful computers at NYU’s high-performance computing lab. Compared to other software techniques used in algorithmic writing, LSTM neural networks can deal with longer chunks of text and construct original sentences of their own (instead of splicing together random sentences from the information they’ve consumed). 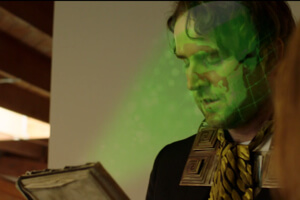 Benjamin was trained on dozens of science fiction screenplays from movies and TV shows Goodwin found online. These included the entire back catalog of the X Files, Star Trek, and Futurama.

This strict diet of sci-fi explains the AI’s predilection to write the lines, “No I don’t know what that is. I’m not sure.” According to Goodwin it reflects how often science fiction characters are trying to figure out unfamiliar situations.

“I’ve taken to saying Benjamin is a sort of mirror. With it, we turn a vast number of things into a single reflection that speaks somehow to all of them — a kind of an average,” Sunspring’s director, Oscar Sharp, told Singularity Hub. “Since art often attempts to do something like this to either life, to the rest of that form, or both, it seems like a very useful tool indeed. Also, as someone who has always felt compelled to make things that feel somehow ‘original’, this sounds like it could be a way to understand what isn’t that.”

To generate the screenplay, Goodwin fed Benjamin prompts provided by the contest. The final script was spit out of a small thermal printer he uses to print AI poetry.

From there, it was up to Sharp, along with his cast and crew, to edit the script down and interpret the uninterpretable—from nonsensical dialogue to mysterious prompts.

One character, Silicon Valley’s Thomas Middleditch, vomits up an eyeball after the prompt “taking his eyes from his mouth.” Later, he grabs the camera and looks into it in response to, “He takes a seat on the counter and pulls the camera over to his back. He stares at it.” 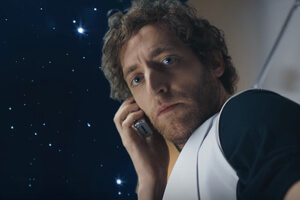 Is this, then, the beginning of the end for writers. Will we soon be forced to “sell blood”? Probably not. If anything, Sunspring shows how completely indispensable the human touch still is. The cast and crew are the main reason the film is the least bit watchable.

But it’s a fascinating new partnership.

“When we teach computers to write, the computers don’t replace us any more than pianos replace pianists,” Goodwin suggests. “In a certain way, they become our pens, and we become more than writers. We become writers of writers.”

All this hints at a continuing collaboration of humans and technology in creative endeavors. And it’s how the one breathes life into the other that makes Sunspring one of my favorite pieces of robowritten fiction to date.

Benjamin has since moved on to generating synopses for films, and Sharp and Goodwin were kind enough to provide us with one below. It’s got that vintage X Files flavor and a totally inscrutable title. Keep ’em coming Benjamin.

A highly advanced violent stranger arrives in a small town in California with his parents and they are all preparing to start a new life in the woods. They become involved in a strange confrontation with a fellow farmer who is the only one who wants to consider the baby in the club. The couple has a love letter to the house and the woman will be sent to prison. The couple have struggled to find their place in the world, which is not the answer to the past.