Back in the 90s, a deeply disturbing image surfaced on the nascent Internet: a lab mouse with something looking like a human ear grown on its back.

Although the “ear” was later proven to be cow cartilage — with no human tissue involved — the misinformation had spread like wildfire. The Internet exploded with cries of outrage (who are we to manufacture animal into organ farms?) and misplaced enthusiasm that science could soon provide people with an unlimited supply of spare organs.

Fast-forward 20 years, and we’ve reached that point again. Only this time, the promise is real.

Guided by sophisticated stem cell technologies and CRISPR, the genome-editing powertool, small teams of scientists have begun pushing the limits of creating human-animal chimeras. The controversial experiments hope to grow human organs inside pig embryos, from stem cells made with a patient’s skin cells.

Because the organs would have the patient’s genetic makeup and immune profile, in theory they would be completely compatible with the patient, with no risk of immunorejection.

The catch? Consider this: are we ready to blur the line between man and beast, and risk creating chimeras armed with human-like brain cells?

The idea of growing human organs in animals has been around for a long time but, due to technical challenges, only recently have attempts started taking off. 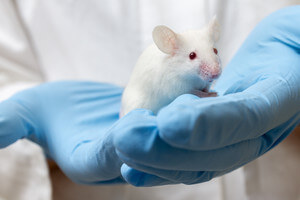 The first successful experiments — producing healthy half mouse, half rat rodents — were performed just five years ago. So far, no scientific papers describing chimeras in larger animals have been published.

That said, preliminary studies using pig embryos have been so promising that the National Institute of Health (NIH) stepped in. Last fall, the agency abruptly announced that it would not fund such studies due to ethical concerns.

In an interview with Scientific American earlier this year, Dr. Juan Carlos Izpisua Belmonte, a pioneer in engineering chimera embryos, set the record straight on this freaky line of research. Why pursue it in the first place?

It comes down to regeneration.

Scientists have tried for the last 15 years or so to coax stem cells into the different cell types that the body is composed of, says Izpisua Belmonte. But nothing has transitioned to clinical practice, largely because the cells were all grown in petri dishes, without a local niche — composed of other cell types, secreted hormones, proteins and blood flow — to nurture them to full maturity.

Stem cells need their environment to build tissue and organs. In theory scientists could try to recreate the niche in humans to help stem cells grow after injury. Some have even started to try, amid heavy doubts of whether the approach could work.

We know that the niche is incredibly complicated, full of molecules and signaling cues that we cannot recreate, explained Izpisua Belmonte.

And that’s where the idea of creating chimeras came from.

The embryo knows how to generate different kinds of tissues that, in the end, form a healthy baby. So what if we put human stem cells into an animal embryo, let the embryo adopt the human cells and guide them towards maturity?

“This is mainly the concept — having a host, an in vivo host, rather than a petri dish to educate the cells to become whatever we want,” says Izpisua Belmonte.

Say you have a highway of cars going a mile a minute. Now a new one wants to enter, explained Izpisua Belmonte. “It has to enter at a specific speed, at a specific location…and it has to be in sync with the speed and what is happening on that freeway,” he says.

When scientists build chimeric embryos, the human stem cell is the new car trying to enter the animal embryo highway. Slipups are fatal: either the human cells disintegrate, the embryo dies, or both parties crash and burn.

A major kink in earlier research was figuring out what kind of human cells to use, and how to put them in at the right time. So far, induced pluripotent stem cells (iPSCs), often made from a person’s skin cells, seemed to do the trick.

Then there’s the issue of where the human cells end up after we put them in, says Izpisua Belmonte. 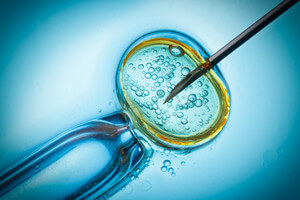 Because human cells are injected into very early stage animal embryos, it’s likely that the injected cells can multiply, migrate, specialize and potentially contribute to any part of the animal’s body as the embryo develops.

In other words, although we may be able to harvest a human pancreas from a pig, the pig’s other organs — heart, liver, lungs and maybe brain — may also turn out unnervingly “human.”

It’s a seriously creepy scenario that scientists are trying to avoid. That’s where CRISPR comes in.

In an as-of-yet unpublished study, Dr. Pablo Ross, a developmental biologist at UC Davis, used the technique to remove a gene in a pig embryo that’s crucial for building a pancreas.

At the same time, he used a micro-needle to inject human iPSCs into the modified embryo.

Stem cells often develop into what the body needs. Since only the human cells have the genetic blueprint to supply a missing pancreas to the pig, Ross hopes that the trick will coax those iPSCs into a single fate — building a pancreas to fill the void — and limit their spread to other organs.

Under the strict supervision from ethics committees, Ross is developing his pig-human chimera embryos for 28 days, roughly one third of a pig’s gestation.

So far the results are reassuring. “My view is that the contribution of human cells is going to be minimal, maybe 3 percent, maybe 5 percent,” he told MIT Technology Review.

And that’s where the field is at.

Much of this is still basic biology, says Izpisua Belmonte. Animal embryos don’t normally like foreign cells, so some of the current research is trying to endow human cells with properties that make them more competent at colonizing the embryo.

Cancer cells have this ability, says Izpisua Belmonte. It’s based on the expression of certain genes and something the field is trying to recreate, he says.

Then there’s the issue of building highly complex structures.

We know that injected human cells can specialize into three layers in a mouse embryo, which in theory can give rise to over 250 kinds of cells, says Izpisua Belmonte.

“But from there, dreaming that they will generate a functional structure, I think we’re going to need time and a lot of luck,” he says.

Other scientists have greater concerns.

“You’re getting into unsettling ground that I think is damaging to our sense of humanity,” says cell biologist Dr. Stuart Newman in an interview with NPR.

A major problem is that human cells could potentially colonize the brain of the animal that you put them in, admitted Izpisua Belmonte.

Although the chances of a livestock embryo growing a predominantly human brain are minuscule, it’s “obviously…not appropriate to have an animal with neurons from people,” he says.

“We are devising genetic engineering technology so that if a cell becomes a neuron it is just destroyed in the embryo,” he says. 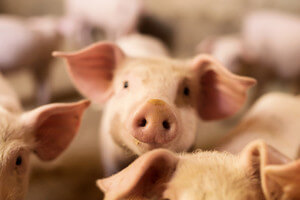 That said, Izpisua Belmonte and other scientists in the field appreciate the controversy.

Currently there are strict caps on how far we can develop the fetus. Even in Spain, where regulations allow human-pig hybrids to come to term, the chimeras must be immediately sacrificed after birth, says Izpisua Belmonte.

For the UK and US, the caps are 14 and 28 days respectively, depending on the experiment.

“We don’t want to grow them to stages we don’t need to, since that would be more controversial,” says Ross. But given that the end goal is to harvest fully grown organs, it’s important to study the hybrid embryo for as long as possible.

What if the contribution of human cells is larger than expected? What if the embryo that develops is mostly human? Then we’d have to do something about it, says Ross.

Without doing the experiment, we won’t know, he says.