The Next Wearable Technology Could Be Your Skin

Technology can be awkward. Our pockets are weighed down with ever-larger smartphones that are a pain to pull out when we’re in a rush. And attempts to make our devices more easily accessible with smartwatches have so far fallen flat. But what if a part of your body could become your computer, with a screen on your arm and maybe even a direct link to your brain?

Artificial electronic skin (e-skin) could one day make this a possibility. Researchers are developing flexible, bendable and even stretchable electronic circuits that can be applied directly to the skin. As well as turning your skin into a touchscreen, this could also help replace feeling if you’ve suffered burns or problems with your nervous system.

The simplest version of this technology is essentially an electronic tattoo. In 2004, researchers in the US and Japan unveiled a pressure sensor circuit made from pre-stretched thinned silicon strips that could be applied to the forearm. But inorganic materials such as silicon are rigid and the skin is flexible and stretchy. So researchers are now looking to electronic circuits made from organic materials (usually special plastics or forms of carbon such as graphene that conduct electricity) as the basis of e-skin.

Typical e-skin consists of a matrix of different electronic components — flexible transistors, organic LEDs, sensors and organic photovoltaic (solar) cells — connected to each other by stretchable or flexible conductive wires. These devices are often built up from very thin layers of material that are sprayed or evaporated onto a flexible base, producing a large (up to tens of cm2) electronic circuit in a skin-like form.

Much of the effort to create this technology in the last few years has been driven by robotics and a desire to give machines human-like sensing capabilities. We now have e-skin devices that can detect approaching objects and measure temperature and applied pressure. These can help robots work more safely by being more aware of their surroundings (and any humans that might get in the way). But if integrated with wearable technology, they could do the same for humans, detecting, for example, harmful movements during sport.

The technology has also led to the creation of bendable screens, while at least one company is hoping to turn the skin into a touchscreen using sensors and a pico-projector rather than a display.

But will we one day come to build this technology directly into our bodies, and how common will it be? The problem with organic electronics at the moment is that they aren’t very reliable and give relatively poor electronic performance. Just like real skin, the e-skin developed so far eventually develops wrinkles. These cause its layers to come apart and the circuits to fail. Plus, atoms in organic materials are more chaotically organized than the inorganic materials used to make traditional electronics. This means electrons move 1,000 times slower in organic materials, so devices made from them will operate much more slowly and wouldn’t deal as well with the heat the circuits generate.

The other big issue is how to integrate e-skin with the human body so that it doesn’t cause medical problems and so that it can interface with the nervous system. Organic materials are carbon-based (like our bodies) so in some senses are more likely to be biocompatible and not rejected by the body. But carbon particles are good at passing through the cells that make up our body and this would likely to lead to inflammation, generating an immune response that could even, according to certain unverified theories, generate tumors.

However, scientists have already had some success linking electronic devices to the nervous system. Researchers at the University of Osaka are leading pioneering research to develop a brain implant from a flexible matrix of organic thin-film transistors that could be activated just by thinking. The difficulty is that such an invasive approach could lead to further problems, especially when we start testing the technology on humans.

In coming years we are are likely to see prototype e-skin devices gaining momentum in the form of wearable body sensors, and potentially as a way to harvest energy from the body’s movement. What will take much longer are the more complicated circuits such as those found in smartphones. And the other big question we’ve yet to answer is how many people will accept permanent or semi-permanent electronic implants. Would you be willing to effectively become a cyborg? 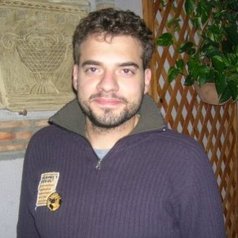 Luca Santarellihttp://www.lcn.ucl.ac.uk/our-people/%5Bfield_people_section-raw%5D/luca-santarelli
In the last four years I have been doing research in the field of conjugated polymers, especially focusing on the applications of organic optoelectronic devices in robotics and medicine. I have been awarded a Marie Curie Action Early Stage Position scholarship in 2013, which has given me the chance to build a remarkable international scientific network within both academic and company environments. In this regard, I have acquired experience in organic semiconductors, flexible electronics, atomic force microscopy, electrostatic discharge stress tests of organic devices. I have also been collaborating and carrying out activities in several institutes, both in the UK and overseas, among which I consider particularly notable the ISIS pulsed neutron and muon source at Rutherford Appleton Laboratory (RAL) in Oxfordshire and the Fraunhofer Institute in Munich. Presently, I am concluding my PhD at University College London and looking forward to finding new challenges in the field of organic technologies. In the medium-long term, I would like to expand my competencies and start personally managing research/work projects in the field of flexible electronics and polymer-based technologies.
RELATED