What’s in a face?

For me, it’s identity.

Arguably, no other body part is as intimately tied to a sense of self as our unique visage. It’s part of the reason we often look so different in photos, which are horizontally flipped compared to how we see ourselves in the mirror. Even such a slight change — one that reflects reality — can feel jarring, because the face smiling back at you doesn’t feel like you.

Imagine what it must be like for people who wake up after severe trauma or facial cancers to peer into the mirror and see someone unrecognizable staring back. 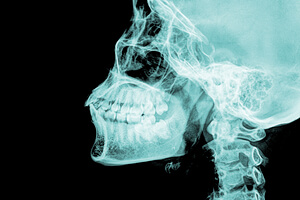 Unfortunately, facial features are especially challenging to reconstruct with plastic surgery due to the complexity of bone structures. But a study, published last month in Science Translational Medicine, offers hope.

A team from Columbia University took stem cells from miniature pigs (or minipigs) with jaw deformities, grew them into living bone that precisely replicates the original anatomical structure, and transplanted the bones into their jaws.

Six months later, not only were there no signs the immune system was rejecting the implanted bone, but it was also gradually replaced by new bone made from the minipigs’ own bodies.

“We’ve been able to show, in a clinical-size porcine model of jaw repair, that this bone…can seamlessly regenerate a large defect while providing mechanical function,” says lead author Dr. Gordana Vunjak-Novakovic in a press release.

The current go-to method is the “free lap” procedure, which involves a grueling series of operations. Surgeons begin by taking a bone from a patient’s leg or other body part, sculpting it into shape, and implanting it into the face. The bone is then reconnected to the local blood supply to keep it alive and healthy.

Because the bone comes from the patient’s own body, there’s little risk of rejection by the immune system. But the procedure damages the harvest site, often leading to severe pain. Also, the bone is hardly ever shaped to precisely match the face, and subsequent swelling and other pressures can cause it to sag out of alignment, resulting in major deformities.

Some of these problems can be solved with new technologies like 3D printing. Using scans of a patient’s skull, which offer layer-by-layer dimensional data about fine bone structure, surgeons can 3D print replacement parts from bone powder and plastic.

An earlier study showed that such a structure, when transplanted with stem cells into mice and given a heavy dose of chemicals, was able to patch up a hole in their skull bones after 12 weeks. Although promising, the fix wasn’t immediately scalable to a human-sized injury.

Another alternative is to use titanium implants, which can be shaped into an exact clone of missing bone segments. In a preliminary study with only a single patient, doctors fashioned a titanium mesh cage to resemble a jaw bone, filled it with bone mineral blocks, bone marrow and a pricey growth factor, and implanted it under the patient’s back muscle for seven weeks to help it develop blood vessels.

The implant was then surgically removed and transplanted into the jaw. The patient was “satisfied with the aesthetic outcome,” but the convoluted procedure was too technically challenging and cost prohibitive to go mainstream.

An ideal implant would seamlessly integrate into the patient’s own bones and tissues, requiring only a short surgical procedure to insert and thus limiting extra damage to the face.

The key, Vunjak-Novakovic realized, is to grow living bone outside the body. Once it’s ready to go, the surgery will be a quick open-and-close to plant the bone in place.

The team focused on the ramus-condyle unit (RCU), which is the lower part of the jaw that connects with the skull near the ears. It’s also the main weight-bearing bone that helps us generate enough force to chew properly.

To mimic human conditions as closely as possible, the team used 14 Yucatan minipigs, whose jaws closely resemble ours in anatomy and mechanical properties.

The team first took thigh bones from cows, sawed them into large chunks, and used a mix of enzymes and detergents to wash away the cells. Although they sound a little freakish, these “decellularized” bones have already been approved for clinical use as a scaffolding matrix.

The scientists then took detailed CT images — a sort of three-dimensional X-ray — of the minipig’s RCU, then surgically removed it to create the deficit. The images were used to precisely guide a four-axis, computer-controlled milling machine to shape the cylindrical bone blocks into custom scaffolds that perfectly matched the removed bone of each minipig.

The scaffolds were next seeded with stem cells derived from the fat of each minipig.

For the next three weeks, the replacement jawbone was kept in a “bioreactor” — a sort of souped-up incubator — that provided it with enough oxygen and nutrients to readily grow into a full RCU bone. Analysis showed that the lab-grown bone expressed many crucial bone-related genes, including ones that help maintain bone structure and promote growth.

The native composition, architecture and mechanical properties of the bone matrix was enough to instruct stem cells to grow into bone cells, wrote the paper’s authors.

That’s a big win, since it means growth factors, the cost prohibitive chemicals used in previous methods, aren’t necessary to grow the bone.

By three weeks, the bones were ready for transplant. Rather than performing the surgery at Columbia University in New York City, the researchers decided to collaborate with surgeons 1,200 miles away, in Baton Rouge, Louisiana.

“The logistics of the envisioned clinical application [is that] the patient and the manufacturing site are at remote locations,” wrote the authors. This requires shipping the bone grafts for implantation, they explained, which is done using the bioreactor to keep the tissue healthy.

Six months after the surgery, the lab-grown grafts had beautifully integrated into the host without any complications. CT scans showed that the graft had almost completely regenerated the original RCU joint anatomy, allowing it to seamlessly attach to the skull. The graft also grew blood vessels — sometimes hard to achieve in implants without additional chemicals — that hooked up with the body’s circulation.

The bone didn’t just look the part; it worked too. A series of bending tests showed that the graft could withstand an equivalent amount of pressure as the native bone, allowing the minipigs to reuse their jaws again.

But the most surprising part is this: the graft was gradually replaced by new bone formed by the minipigs’ bodies. Scientists don’t yet have a good explanation of why this happened, although they think the infused stem cells are somehow involved.

“Our lab-grown living bone serves as an ‘instructive’ template for active bone remodeling rather than as a definitive implant,” explains Vunjak-Novakovic. “This feature is what makes our implant an integral part of the patient’s own bone, allowing it to actively adapt to changes in the body throughout its life.”

What makes this study special is that the entire trial was carefully fashioned after what could typically happen in a clinical setting.

The grafts were grown under strict manufacturing guidelines that govern medical implants for human use; the surgeries were all performed by expert maxillofacial surgeons using standard clinical protocols and tools. Rather than restraining the minipigs to help the wound heal, the researchers let them to run free as soon as they were able to, mimicking more natural conditions.

We may proceed to clinical trials as soon as 3 years from now, Vunjak-Novakovic told the New York Times. Taking the technology to market will be another 3 or 4 years, likely in the early 2020s.

To get there sooner, the team founded EpiBone, a biotech company based in Brooklyn that was chosen as one of the World Economic Forum’s 2015 Technology Pioneers.

Although currently the team is focused on bones above the neck — which according to EpiBone could impact roughly 100,000 people in the US a year — they believe the current work could lay the groundwork for future technologies that aim to regenerate a whole limb.

That’s a lot harder, since each different type of tissue — skin, bone, cartilage, muscle, nerve — will have to be grown in separate bioreactors and then fused together, says Dr. Nina Tandon, CEO of EpiBone, in a recent interview with Scientific American.

With the advancement of material science that’s allowing us to grow increasingly larger tissues, I do see a future for larger reconstructions, she says.

More broadly, Tandon is deeply invested in the ethos of self-regeneration.

“I love the idea that we can look at our own body as a source of healing, as opposed to pills and machines,” says Tandon. “In a way it’s an agricultural and ecological view of the body, combined with 3D fabrication. It’s so old that it’s new.”