You may have heard that before—but if anyone has the credentials to back up a statement like this, it’s Templeton. A software architect, internet entrepreneur, and board member of the Electronic Frontier Foundation, he’s been a consultant on Google’s team designing a driverless car, and he regularly lectures and blogs about automated transportation. His presentation gave details on the industries and areas of our lives that will be disrupted by the advent of self-driving cars.

Every year, a global total of 1.2 million people die in car accidents. 40% of those accidents involve alcohol. While it’s undeniable that fatalities will occur in self-driving cars, the precision of the computers running the cars will be far superior to human motor skills, coordination, and reactive ability. Plus, self-driving cars aren’t likely to throw back one last cocktail before making the journey home.

A staggering 25% of energy use and greenhouse gases come from cars. According to Templeton, anyone who says they’re working on environmental issues isn’t really doing so unless they’re working on cars. The gradual elimination of petroleum-based fuel, changes in car design and manufacturing processes, and corresponding reduction in emissions will result in a cleaner planet and an abundant amount of energy resources that can be re-directed to other purposes. 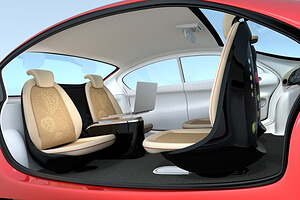 Picture your own city, suburb, or town. How much of the land area has been paved over and sectioned off to serve as parking space? Parking lots are everywhere, taking up land that could otherwise hold buildings or green space. When self-driving cars replace human-driven vehicles, we won’t need all those parking lots anymore, hence a lot of real estate will be freed up. Not to mention the fact that you might opt to live farther out of town—where homes don’t cost an arm and a leg—because you have a more comfortable and productive commute in a car that drives you to work.

Millions of physical products are delivered to homes all over the world every day. From pizzas to clothing to TVs to furniture, someone is driving a car or truck to bring your order to you on time. What will happen when we don’t need cars and drivers to make deliveries anymore? Templeton is even working on a project that does away with the car in favor of small sidewalk delivery robots. The mission? “A self-driving box that can get you anything in 30 minutes for under a dollar.” 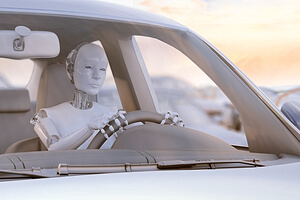 As mentioned above, self-driving cars will have fewer accidents than humans, but it’s going to take a while for them to eliminate fatalities altogether. So what will happen when there are accidents that are the vehicle’s fault? Existing semi-automated driving systems—like Tesla’s Autopilot—warn riders that although they’re not driving, they do need to pay attention to the road and to the car’s movements. However, a surprising number of people ignore the warning then want to blame the car when an accident happens. There will be unexpected legal and ethical implications of trying to determine fault and accountability in accidents.

Self-driving cars are likely to decrease the value people place on brands; luxury brands like BMW or Mercedes could even be rendered valueless. While luxury options will doubtless be available in self-driving cars, the emphasis will be on platforms selling rides (like Lyft), not manufacturers selling cars.

Though these large-scale changes have yet to take place, self-driving cars aren’t a “technology of the future” anymore; they’re present and active in several parts of the world. Google’s self-driving cars have been on the streets in Mountain View, California for a few years. In France, Navya shuttles pick up passengers and run at a cautiously slow speed to drop them off. In Singapore, self-driving taxis by nuTonomy run along a fixed route. Just last month, Uber announced they would offer the first self-driven rides in Pittsburgh (with humans at the wheel as a back-up). Uber recently purchased an American company called Otto, whose goal is to automate trucks and allow them to drive unmanned cross-country.

Templeton concluded with his vision of the car of the future: it will be small, electric, have  hundreds of parts rather than thousands, few controls, no dashboard, and limited vehicle-to-vehicle communication. The best part? We’ll be able to ride in it for about 30 cents a mile, which is half the current cost of human-driven cars.