This Is Your Brain on Quantum Computers

Machines enrich and enhance our lives, whether it’s the smartphones that allow us to stay connected or the supercomputers that solve our toughest computational problems. Imagine how much more productive and innovative our world will be when computers become infinitely more powerful. Indeed, the growing field of quantum computing may make our current technological capacities look feeble and primitive in comparison. It could even transform the workings of the human brain and revolutionize how we think in ways we can’t begin to imagine.

Today, computers operate at the most basic level by manipulating two states: a zero or a one. In contrast, quantum computers are not limited to two states, but can encode information in multiple states that exist in superposition, also known as quantum bits or qubits. 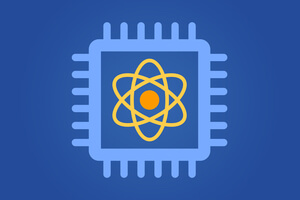 In other words, this technology takes advantage of one of the most fascinating properties of the quantum world: the ability of subatomic particles to exist in more than one state at any given time. Consequently, a quantum computer can perform many calculations at the same time, whereas a traditional Turing machine can only perform a single calculation at once. Such quantum machines will be millions of times more powerful than our most powerful current computers.

The revolutionary implications of such a computing capacity are immense and will contribute to the acceleration of human thinking and progress.

Quantum computers can allow us to push the limits of artificial intelligence, derive ground-breaking insight from big data, advance cryptography, develop new materials, and even simulate virtual quantum systems like never before. According to Greg Tallant, Lockheed Martin fellow at the USC center, “The technology could be harnessed to speed the debugging of millions of lines of code or help solve the aerospace industry’s toughest computational problems.”

Many techno-optimists believe that quantum computers will allow us to expand our understanding and capabilities by giving us access to machines that think in ways we never have in multiple states and dimensions at once. But what if it wasn’t just our machines that were unfathomably more intelligent? What if we were too?

Imagine being able to ponder multiple ideas at the same time, solve several mathematical equations at once, or have a conversation with more than one person. Imagine what kind of world we would live in if every person could exist in a multitude of mental states.

One wild application of quantum computers may be to design them as a carrier for our minds. While this sounds like science fiction, we are seeing exponential growth in brain scanning and mapping technologies, along with neural engineering, which will all contribute to our ability to model the brain and develop technologies that can digitally replace some or all of its functions.

Hundreds of millions of dollars are being invested in brain-computer interfaces and implants. Neuroscientist Kenneth Hayworth writes in Skeptic magazine, “All of today’s neuroscience models are fundamentally computational by nature, supporting the theoretical possibility of mind-uploading”. Couple that with the rapidly growing advancements in quantum computing and the futuristic hope that we will one day upload our minds into machines. After all, the laws of physics don’t limit that possibility.

There are plenty of technical, scientific, and even philosophical questions yet to be answered. Even with the capability, some wonder whether our sense of self would go along for the ride, or if we would have effectively created a copy of ourselves. And perhaps instead, we may simply link more closely with computers via brain-machine interfaces.

In either case, we will undoubtedly find our capabilities enhanced.

And perhaps an even more mind-blowing aspect of quantum computing is the idea put forward by Oxford University quantum physicist, David Deutsch, who suggests that quantum computers function by distributing parallel work across many different universes. These new machines could be humanity’s first baby steps towards harnessing the computational power of a multiverse.

Will we get there?

Some are skeptical about whether quantum computers will be taking over anytime soon. There are many challenges facing experts in the field, such as designing a simple way to control complex systems of qubits. One major obstacle is that qubits are more susceptible to errors, compared to transmitters in classical computers. Another one is creating qubits that can maintain their quantum properties for a long period of time, known as the coherence time. Scott Aaronson, professor at The University of Texas, Austin has listed the main challenges to quantum computing theory.

But we are seeing progress in the field.

Tech giants like Google and Amazon are racing to develop their quantum computing technologies. Last year, teams of Google and NASA scientists showed a D-Wave quantum computer was 100 million times faster than a conventional computer in a test and successfully simulated a hydrogen molecule with it. This was a development that, according Google quantum software engineer Ryan Babbush, could allow us to “simulate even larger chemical systems” and “revolutionize the design of solar cells, industrial catalysts, batteries, flexible electronics, medicines, materials and more.”

Many also argue quantum computing will be a successor to Moore’s Law, which states that the number of transistors on a microprocessor doubles every 18 months. Moore’s law has been going steady since the 1970s, but traditional chips are approaching natural limits. What will follow? There are a number of competing technologies in the wings, but quantum computing is certainly a leading candidate in a number of powerful applications.

Regardless of whether human consciousness naturally relies on some form of quantum phenomena (many speculate that it does but we do not know for a fact), there is no doubt such a measure will push the boundaries of the human mind beyond its natural capabilities.