The Future of Surgery Is Robotic, Data-Driven, and Artificially Intelligent

As far back as 3,500 years ago ancient Egyptian doctors were performing invasive surgeries. Even though our tools and knowledge have improved drastically over time, until very recently surgery was still a manual task for human hands.

When it came out about 15 years ago, Intuitive Surgical’s da Vinci surgical robot was a major innovation. The da Vinci robot helps surgeons be more precise and dexterous and to remove natural hand tremors during surgery.

In the years since da Vinci first came out, many other surgical robots have arrived. And today there’s a new generation coming online, like the Verb robot, a joint venture between Google and Johnson and Johnson. This means surgery is about to get even more interesting. Surgical robotics will be able to do more than just improve dexterity and reduce incision size…

“We’re on the verge of what we might call the second wave in surgical robotics,” said Catherine Mohr, vice president of strategy at Intuitive Surgical, while speaking at Singularity University’s Exponential Medicine conference this week. 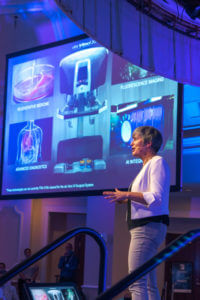 Mohr believes this new wave of innovation will be characterized by the convergence of surgical robotics with AI and data gathered from robotic systems.

Surgery is about to get “digitized.” We’ll start collecting and analyzing data passing through these robotic systems, like motion tracking. “Once we can turn something into data, then we can start making exponential changes,” Mohr said.

A problem “calling out for robotics”

China is currently on track to have a million lung cancer deaths a year. Lung cancer is surgically treatable, but only if it is found fast enough. And too often we’re not finding it fast enough. Mohr says the problem of lung cancer detection is just calling out for robotics.

Currently, surgeons use a pre-operative image to search for cancer to remove, but the lungs are a moving target. So, to get to the cancer, surgeons deform the lungs on the way in and again on the way out because they are taking a different path. With surgical robotics, you can track the path in and use that same motion tracking data on the way out.

3 types of AI for surgery

In closing, Mohr sketched out this next wave of AI and robotics in surgery as a tight partnership between humans and machines, with one making up for the weaknesses of the other.

“I tend to think of robotics as a platform. It’s a platform which we have really advanced very far in terms of being able to reduce the invasiveness of the interventions,” she said. “These next phases are all going to be about integrating a lot of these new technologies onto this platform and being able to potentiate them.”