The road to renewable energy requires one step at a time.

Well, actually, it requires quite a few steps.

Researchers at the University of Wisconsin and Forest Products Laboratory in Madison believe they can harness the mechanical energy generated by people walking across the ground using a common component of flooring. The concept makes use of chemically-treated cellulose nanofibers in wood pulp that produce an electrical charge when they come into contact with untreated nanofibers.

“We’ve always been looking for affordable, scalable technology that can effectively harvest mechanical energy from the environment,” said Xudong Wang, an associate professor of materials science and engineering at UW-Madison, in an interview with Singularity Hub. 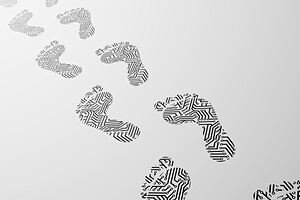 Two years into development, Wang refers to the technology as a triboelectric nanogenerator (TENG). Triboelectricity is similar to the phenomenon that produces static electricity on clothing.

In the case of TENG, two different materials with different capabilities of attracting electrons are installed in the flooring. The fibers are treated chemically to make them more electron-attractive or electron-repulsive. Once a person steps on the floor, the materials make contact and transfer a charge between them. Once the contact is broken — the footstep lifts away from the floor — the charge flows back through an external circuit.

TENG flooring would be most suitable in areas with high foot traffic, such as malls, subway stations or even sports stadiums. Wang says a stadium filled with 80,000 people could spark to life up to 100 high-intensity stadium lights with just one step.

There have been other attempts and technologies in the field that Wang calls roadside energy harvesting. For example, piezoelectric devices harvest the vibrational energy of road traffic using a piezoelectric crystal placed just below the asphalt surface. The crystal flexes slightly when vehicles travel across the road, producing an electrical current. The technology has been used in Japan and Israel. However, the ceramic materials used in the manufacture of the device are expensive and toxic.

“Based on [the triboelectric] concept, the material selection is much broader, and we can use a lot of cheap, environmentally-friendly and even biodegradable materials,” says Wang, who estimates the cost to implement the technology would increase flooring construction costs by no more than 20 percent.

Wang is currently developing a prototype, but he believes the technology can be used in many different kinds of flooring, and the life of the system could potentially outlast the floor itself.

Innovations using a more conventional renewable, solar, are paving the way for producing energy at a nationwide scale. The open road may one day become paved with gold — sunlight — as countries turn roadways into sturdy solar panel arrays.

The Netherlands reputedly built the first solar road – actually, a bike path, the Dutch being the bicycle-loving people that they are – in 2014. A modest 90 meters long after a recent addition, the Dutch SolaRoad consists of concrete modules with a translucent top layer of tempered glass. Underneath the glass are crystalline silicon solar cells. In March, the Dutch company announced plans for another project in California.

Earlier this year, France announced it would install 1,000 kilometers (more than 600 miles) of solar roads over the next five years. The company behind the French project, Colas, calls its solar road system Wattway. Colas estimates for every one kilometer of roadway, it can meet the energy needs of 5,000 people. The math of the completed project works out to enough electricity for five million people.

The Wattway pavement structure consists of “extremely resistant photovoltaic panels that can be applied on all types of roadways, linked to electrical equipment and networks,” according to the company. Colas claims Wattway can power public lighting and road signs and signals in cities, towns and remote areas, as well as electric vehicle charging stations.

In the United States, the company Solar Roadways promises a similar off-the-grid solution. Recently highlighted in our story on tech crowdfunding, Solar Roadways raised more than $2 million on Indiegogo and also received several grants from the Department of Transportation. Solar Roadways panels are made of tempered glass that is textured to create traction for vehicles and pedestrians, with the ability to handle loads of up to 250,000 pounds. Each unit is made of top and bottom glass panels, with components like solar cells and LED lights enclosed in between.

According to estimates by Solar Roadways, a national road system of such solar panels could produce more than three times the electricity currently used in the United States — and just about enough electricity to supply the entire world.

Unfortunately, the company encountered a few bumps in the road during a pilot program in its hometown of Sandpoint, Idaho, this year.

The biggest problem centered on a laminating machine used in the manufacturing process to weatherproof the hexagonal-shaped panels. Two components of the laminating machine had malfunctioned, which caused erratically different conditions across the panels, according to the company’s blog. Some panels had ruined solar cells, some had ruined LED lights, and the heating elements used to keep them clear of ice and snow were disabled.

The husband-and-wife team of Scott and Julie Brusaw say in their blog that the failure is only a temporary detour to building a greener future for the planet.

These companies, whether harnessing vibrations from people or the power of the sun, certainly seem to be on the ground floor of a new and exciting chapter in renewable energy.