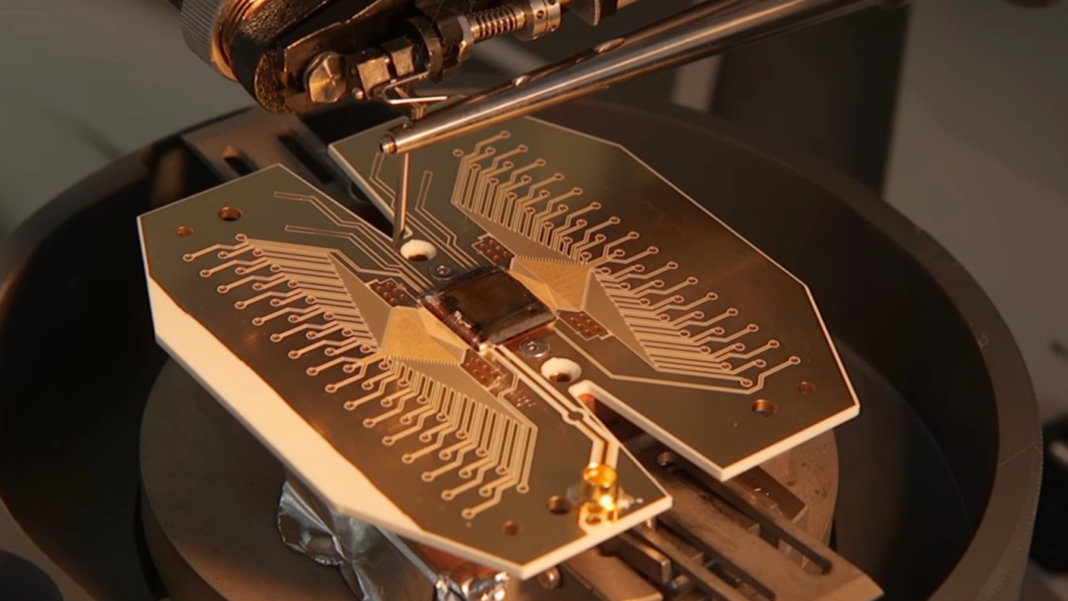 Quantum computers promise to crack some of the world’s most intractable problems by super-charging processing power. But the technical challenges involved in building these machines mean they’ve still achieved just a fraction of what they are theoretically capable of.

Now physicists from the UK have created a blueprint for a soccer-field-sized machine they say could reach the blistering speeds that would allow them to solve problems beyond the reach of today’s most powerful supercomputers.

The system is based on a modular design interlinking multiple independent quantum computing units, which could be scaled up to almost any size. Modular approaches have been suggested before, but innovations such as a far simpler control system and inter-module connection speeds 100,000 times faster than the state-of-the-art make this the first practical proposal for a large-scale quantum computer.

“For many years, people said that it was completely impossible to construct an actual quantum computer. With our work we have not only shown that it can be done, but now we are delivering a nuts and bolts construction plan to build an actual large-scale machine,” professor Winfried Hensinger, head of the Ion Quantum Technology Group at the University of Sussex who led the research, said in a press release.

The technology at the heart of the individual modules is already well-established and relies on trapping ions (charged atoms) in magnetic fields to act as “qubits,” the basic units of information in quantum computers.

While bits in conventional computers can have a value of either 1 or 0, qubits take advantage of the quantum mechanical phenomena of superposition, which allows them to be both at the same time.

In a paper published in the journal Science Advances last week, researchers outline designs for modules containing roughly 2,500 qubits and suggest interlinking thousands of them together to create a machine containing two billion qubits. For comparison, Canadian firm D-Wave, the only commercial producer of quantum computers, just brought out its latest model featuring 2,000 qubits.

This is not the first time a modular system like this has been suggested, but previous approaches have recommended using light waves traveling through fiber optics to link the units. This results in interaction rates between modules far slower than the quantum operations happening within them, putting a handbrake on the system’s overall speed. In the new design, the ions themselves are shuttled from one module to another using electrical fields, which results in 100,000 times faster connection speeds.

The system also has a much simpler way of controlling qubits. Previous designs required lasers to be carefully targeted at each ion, an enormous engineering challenge when dealing with billions of qubits. Instead, the new system uses microwave fields and the careful application of voltages, which is much easier to scale up.

The researchers concede there are still considerable technical challenges to building a device on the scale they have suggested, not to mention the cost. But they have already announced plans to build a prototype based on the design at the university at a cost of £1-2 million.

“While this proposal is incredibly challenging, I wish more in the quantum community would think big like this,” Christopher Monroe, a physicist at the University of Maryland who has worked on trapped-ion quantum computing, told Nature.

In their paper, the researchers predict their two billion qubit system could find the prime factors of a 617-digit-long number in 110 days. This is significant because many state-of-the-art encryption systems rely on the fact that factoring large numbers can take conventional computers thousands of years. This is why many in the cybersecurity world are nervous about the advent of quantum computing.

These researchers aren’t the only ones working on bringing quantum computing into the real world, though. Google, Microsoft and IBM are all developing their own systems, and D-Wave recently open-sourced a software tool that helps those without a background in quantum physics program its machines.

All that interest is due to the enormous potential of quantum computing to solve problems as diverse and complex as developing drugs for previously incurable diseases, devising new breeds of materials for high-performance superconductors, magnets and batteries and even turbo-charging machine learning and artificial intelligence.

“The availability of a universal quantum computer may have a fundamental impact on society as a whole,” said Hensinger. “Without doubt it is still challenging to build a large-scale machine, but now is the time to translate academic excellence into actual application, building on the UK’s strengths in this ground-breaking technology.”