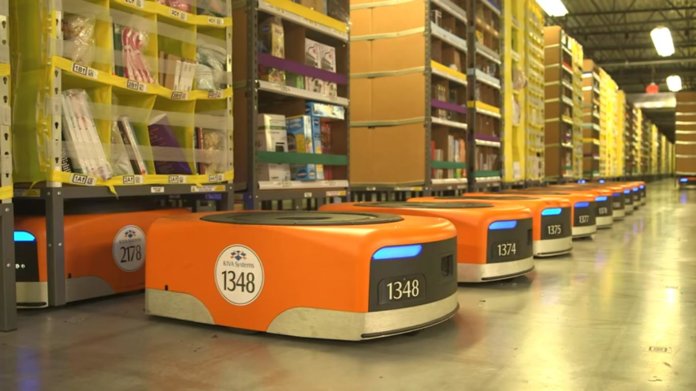 Accelerating technology has been creating a lot of worry over job loss to automation, especially as machines become capable of doing things they never could in the past. A recent report released by the McKinsey Global Institute estimated that 49 percent of job activities could currently be fully automated—that equates to 1.1 billion workers globally.

What gets less buzz is the other side of the coin: automation helping to create jobs. Believe it or not, it does happen, and we can look at one of the world’s largest retailers to see that.

Thanks in part to more robots in its fulfillment centers, Amazon has been able to drive down shipping costs and pass those savings on to customers. Cheaper shipping made more people use Amazon, and the company hired more workers to meet this increased demand.

Tasks involving fine motor skills, judgment or unpredictability are handled by people. They stock warehouse shelves with items that come off delivery trucks. A robot could do this, except that to maximize shelf space, employees are instructed to stack items according to how they fit on the shelf rather than grouping them by type.

Robots can only operate in a controlled environment, performing regular and predictable tasks. They’ve largely taken over heavy lifting, including moving pallets between shelves—good news for warehouse workers’ backs—as well as shuttling goods from one end of a warehouse to another.

Under current technology, the expense of building robots able to stock shelves based on available space is more costly and less logical than hiring people to do it.

Similarly, for outgoing orders, robots do the lifting and transportation, but not the selecting or packing. A robot brings an entire shelf of goods to an employee’s workstation, where the employee selects the correct item and puts it on a conveyor belt for another employee to package. By this time, the shelf-carrying robot is already returning the first shelf and retrieving another.

Since loading trucks also requires spatial judgment and can be unpredictable—space must be maximized here even more than on shelves—people take care of this too.

Ever since acquiring Boston-based robotics company Kiva Systems in March 2012—at a price tag of $775 million—Amazon has been ramping up its use of robots and is continuing to pour funds into automation research, both for robots and delivery drones.

Even better, the company’s Q4 2016 earnings report included the announcement that it plans to create more than 100,000 new full-time, full-benefit jobs in the US over the next 18 months. New jobs will be based across the country and will include various types of experience, education, and skill levels.

So how tight is the link between robots and increased productivity? Would there be even more jobs if people were doing the robots’ work?

Well, picture an employee walking (or even running) around a massive warehouse, locating the right shelf, climbing a ladder to reach the item he’s looking for, grabbing it, climbing back down the ladder (carefully, of course), and walking back to his work station to package it for shipping. Now multiply the time that whole process took by the hundreds of thousands of packages shipped from Amazon warehouses each day.

Though it may not last forever, right now Amazon’s robot-to-human balance is clearly in employees’ favor. Automation can take jobs away, but sometimes it can create them too.