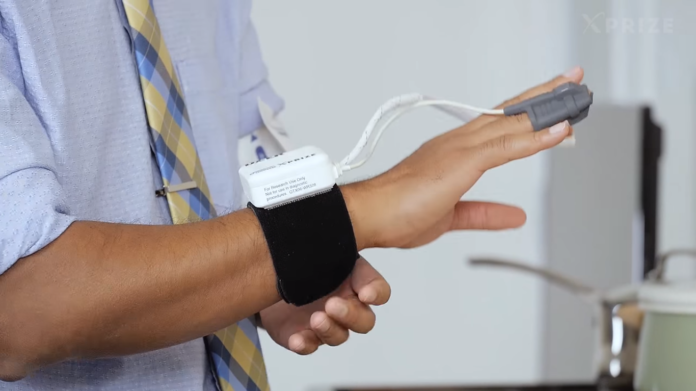 In a few hundred years, doctors will scan their patient with a handheld device called a Tricorder to diagnose virtually any ailment. That’s according to Star Trek. Way back here in the 21st century, we’re not supposed to be anywhere near that utopian technology. But we may not be as far off as you’d think. That’s according to an XPRIZE competition inspired by the iconic show.

Searching for the real-life medical tricorder, in 2012 the XPRIZE Foundation partnered with San Diego-based Qualcomm to launch the Tricorder XPRIZE. And recently, XPRIZE announced the winner.

The contest challenged participants to create a Tricorder device that could diagnose 12 different diseases and capture real-time vital signs with a user-friendly handheld device. Such a device would be a major stepping stone to democratizing healthcare, essentially making reliable, home-based diagnostics available to anyone, anywhere in the world.

The nature of healthcare is currently sporadic and reactive; we go to the doctor once we’re already sick or injured. What if instead, healthcare was continuous and proactive, focusing more on preventing illness in the first place rather than on treating it once it’s already manifested?

It’s hoped that Tricorder-like devices can keep patients healthier while also easing the burden on healthcare professionals. The shortage of doctors that currently exists—especially in remote and rural areas—is likely to worsen in the future.

The contest’s three basic rules were the following:

1. Each team could take its own approach to its Tricorder’s design, but the finished product had to weigh five pounds or less.

2. The Tricorders must be able to diagnose 10 core health conditions, including anemia, diabetes, and pneumonia; a choice of three elective health conditions in a list that includes hypertension, melanoma, and shingles; and all five of the required vital signs.

3. Each Tricorder system must include a way for consumers to input basic health information, be accessible remotely via the internet, and be compatible with any smartphone or tablet.

Sounds like a tall order, but 312 teams from 38 countries stepped up to the challenge. After whittling down the competition and honing their tech over five years, a winner and runner-up were chosen last week and awarded $2.5 million and $1 million for their work, respectively.

Pennsylvania-based Final Frontier Medical Devices took first place for their machine called DxtER. DxtER uses a set of non-invasive sensors to check vital signs, body chemistry and biological functions, and pulls data from clinical emergency medicine. This data is synthesized by an artificial intelligence engine, and DxtER comes up with a diagnosis it claims is both quick and accurate.

The team was a family affair, consisting primarily of brothers George and Basil Harris, an engineer and a physician, respectively. They had help from their sister who’s a health policy expert, and their brother who’s a practicing urologist. Though everyone who worked on the project had a full-time job elsewhere, they put in unpaid hours on nights and weekends to make their vision of the Tricorder a reality.

Taiwan-based Dynamical Biomarkers Group, a research team from the country’s National Central University, took second place with its prototype for a smartphone-based device that pairs diagnostic algorithms with analytical methodology. The three-module system includes a Smart Vital-Sense Monitor, Smart Blood-Urine Test Kit, and a Smart Scope Module, each of which is wirelessly connected to a smartphone equipped with an app that guides the user through diagnostic tests.

In the contest’s final round, the two teams had to put together 45 kits for testing, making sure the kits could be used by non-medical professionals. The kits were subjected to diagnostic experience evaluations and consumer testing, and were rated for disease diagnostics, vital signs, and consumer experience.

Both teams’ devices ended up surpassing the competition’s benchmarks for disease diagnosis and the user experience requirements.

Speaking about the Tricorder XPRIZE, Qualcomm Chairman Paul Jacobs said, “The competition is an opportunity to spread the availability of health care to anyone anywhere, even those in developing countries with few skilled health care professionals…mobile health care will allow us to be measured all the time, so we’ll immediately see if we’re better, if the treatment is working, and if the medication needs to be changed. It will no longer be ‘Take this pill and call me in the morning.’”

Though the Tricorder contest has been won, we don’t quite have Star Trek’s Tricorder yet—it was a single all-in-one device, while DxtERs are more like kits. They include sensors that require physical contact with the skin or bodily fluids to do their work. The Tricorder scanned patients at a distance, and it provided universal diagnosis instead of covering a select handful of conditions.

That said, both Final Frontier and Dynamical Biomarkers showed the quick progress being made in miniaturized sensors and computing. The diagnostic portions of their devices aren’t expensive, specialized computer/software combinations; they’re powered by everyday smartphones and the apps that run on them.

Going forward, the sensors used in Tricorder-like devices will get progressively smaller and more capable, expanding their list of diagnosable diseases. The technology developed in the competition may also seed future devices—Final Frontier’s founders have reportedly applied for seven patents involved in their invention.

XPRIZE and Qualcomm have committed $3.8 million to continued testing and development of the Tricorders and will support FDA testing of them too. The companies are even planning to create a documentary and a museum exhibit about the device and its potential.

We may not have a full-fledged Tricorder yet, but judging by this investment and enthusiasm, it seems like just a matter of time until people all over the world can monitor their health better than Dr. McCoy himself.