A Mars Survival Guide: Finding Food, Water, and Shelter on the Red Planet 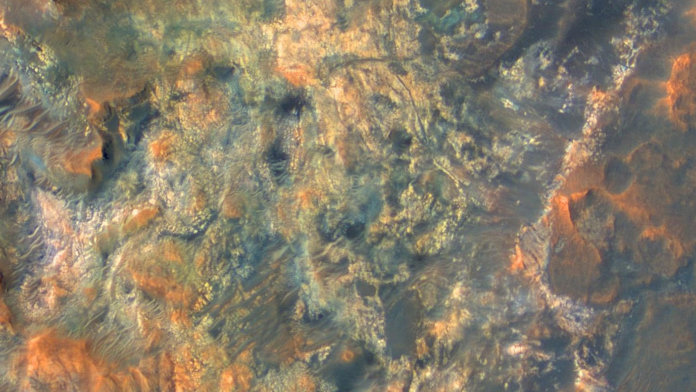 Classical science fiction tales about Mars have often been about bug-eyed Martians invading Earth for its precious resources. The reality is that within the next two decades—with the usual caveats about technical and budgetary limitations—humans will be the ones invading the Red Planet.

This year NASA unveiled its latest plan to hopscotch across 140 million miles to the solar system’s fourth planet from the sun. The strategy calls for building a lunar station in orbit around the moon to serve as a sort of staging area for deep-space missions to Mars. Dubbed Deep Space Gateway, the manned outpost will be the launching pad for the Deep Space Transport, the agency’s version of the USS Enterprise.

By the early 2030s, an astronaut not named Matt Damon may put the first human footprint on a celestial body since 1969. He or she will need some nifty gadgetry to make life possible on a cold, inhospitable world far, far from the nearest Home Depot.

The evidence that there is water on Mars is overwhelming. Surface streaks on the Red Planet that ebb and flow over time have led scientists to conclude that liquid water is indeed present. Last year, NASA announced it had also found a vast reservoir of ice frozen beneath the planet’s rocky surface.

Still, for the early travelers to Mars, none of these sources of water may be readily available, or they may be energetically too expensive to access. Instead, future astronauts may use a type of water harvester first developed by scientists at the University of California, Berkeley.

The solar-powered device uses a special metal-organic framework (MOF) to pull water out of the air in conditions as low as 20 percent humidity. The research was published last month in the journal Science.

The prototype was able to harvest about three quarts of water from air in 12 hours using two pounds of MOF. MOFs combine metals like magnesium with organic molecules in a tinker-toy arrangement to create rigid, porous structures to store gases and liquids.

“If the relative humidity level on Mars is around 20 percent or more, I do not see why this device can’t work there,” says Omar Yaghi, a co-author on the paper at UC Berkeley who first invented MOFs about 20 years ago, in reply to an email from Singularity Hub.

While the water harvester would be a boon to parched areas on Earth, such a device would also be useful on bone-dry Mars, where despite desert-like conditions, relative humidity at night can reach 80 to 100 percent—more than enough to suck water out of the alien atmosphere.

Yaghi’s team is already at work on cheaper and more efficient MOFs for water vapor sorption. “It is only a matter of time for this technology to be economically competitive with others. This is a significant step towards future water safety and security, as I call it ‘personalized water.’”

See Yaghi describe how the water harvester works in the video below.

A 3D blueprint for building civilization

It seems that we can 3D print just about anything these days—even working ovaries. The ability to manufacture tools and parts will help Mars colonists, who will likely find themselves restricted to just one piece of carry-on luggage.

A team at Northwestern University recently demonstrated the ability to 3D print structures using Martian and lunar dust. Well, not real off-world dust but NASA-approved copies that simulate their size and shape. The researchers, led by Ramille Shah, used what they call a 3D “painting” process that employs novel inks that her lab has used previously to print things like graphene and carbon nanotubes.

The research was published earlier this year in Nature Scientific Reports.

The 3D-painted material, composed of 90 percent dust by weight, is as flexible and tough as rubber, according to a press release from the university. It can be “cut, rolled, folded, and otherwise shaped after being 3D painted.” Making interlocking bricks like Legos is even possible.

“For places like other planets and moons, where resources are limited, people would need to use what is available on that planet in order to live,” says Shah, an assistant professor at Northwestern’s McCormick School of Engineering and of surgery in the Feinberg School of Medicine. “Our 3D paints really open up the ability to print different functional or structural objects to make habitats beyond Earth.”

Home away from home

NASA is developing its own solution for habitats on the Red Planet. It’s an igloo.

Technically, the “Mars Ice Home” is a large, inflatable inner tube-like structure that would incorporate materials extracted from the planet and encased by a shell of ice.

The idea behind the inflatable part of the structure is that it would be lightweight to transport. Why ice? Water is an excellent shielding material against radiation, one of the biggest hazards facing humans on deep-space missions. Prolonged exposure can cause cancer or even acute radiation sickness.

An alternative would be to bury housing, labs and other buildings below the surface, forcing the explorers to live a troglodyte existence. The Mars Ice Home offers better views.

“All of the materials we’ve selected are translucent, so some outside daylight can pass through and make it feel like you’re in a home and not a cave,” says Kevin Kempton, principal investigator for the Mars Ice Home project at NASA’s Langley Research Center, in a press release.

An apple a day

It’s unclear if sci-fi blockbuster The Martian did anything to boost potato sales, but researchers are developing sophisticated self-sustaining grow facilities to supply future astronauts with fresh fruits and vegetables.

One effort is a collaboration between NASA, the University of Arizona (UA) and private enterprise. The Bioregenerative Life Support System, or BLSS, is a hydroponic growth chamber that doesn’t need soil (or, thankfully, human feces) to produce food.

The closed-loop system starts with water enriched with nutrients. The nutrient-enriched water supports the root system of the plants. The system is mutually beneficial to people and plants, as the former expel carbon dioxide, which is absorbed by the vegetation. The plants, in turn, produce oxygen as part of the photosynthetic process.

“We began our first major project in 2004. We designed and had built a food growth chamber at the South Pole [in Antarctica]. It’s still down there working right now,” says Gene Giacomelli, director of the Controlled Environment Agriculture Center at UA and former principal investigator on the BLSS project.

BLSS was featured at Biosphere 2, a closed ecological system owned and operated by UA for biological research.

Of course, there’s quite a bit of work ahead before astronauts start growing red delicious apples on the red planet. NASA and its commercial partners are still developing the next-generation rockets that will do all the heavy lifting for those future missions. Other projects are under way to build the deep-space habitat modules that will carry humans to Mars.

There are still serious obstacles to overcome. For example, there is the problem of radiation. Researchers funded by the European Space Agency recently announced that they produced a device that mimics space radiation to study its threats and to develop solutions to mitigate its effects on people and equipment. A review of aerospace medicine is currently under way as part of the effort to help humans stay fit and healthy in deep space.

And there’s the human drama of being far from home. Are people mentally tough enough to survive such a years-long journey? One study using people wintering in Antarctica is attempting to find out.

This year will mark the 60th anniversary of the beginning of the Space Age, when Russia launched the Sputnik satellite. Reaching Mars in less than a century since that historic moment represents a new future for the human race—one that begins with today’s technological innovations.