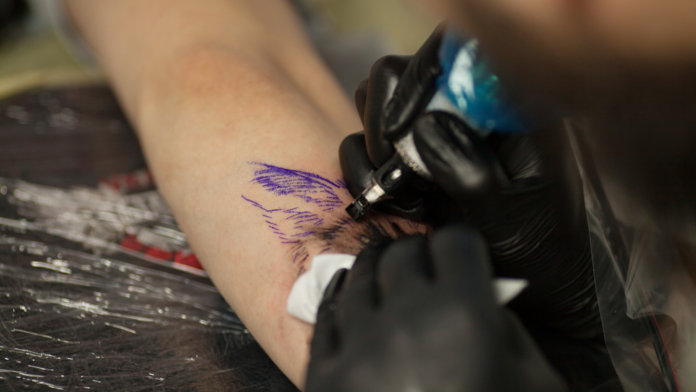 These Color-Changing Tattoos Monitor Your Health, No Wearable Needed
Katharine Schwab | Fast Company
“Researchers are getting closer to turning the skin into an interface, while designers imagine what these interfaces might look like. Do they come in the form of a tattoo, like Vega suggests, or a temporary tattoo that doubles as a circuit? Do they act like a second skin?…Either way, there’s a whole lot more to explore on the surface of our skin.”

Incredibly Soothing Robot Makes Towers of Balanced Stones
Evan Ackerman | IEEE Spectrum
“With careful planning and a delicate touch, this robot arm is learning to autonomously build towers out of balanced pieces of limestone…The overall idea here is that eventually, robots will be able to take advantage of hyper local building materials (like the nearest pile o’ rocks) and make useful, environmentally friendly structures out of them without the need for either processing or adhesives (like concrete).”

Uber Just Fired the Engineer at the Center of Its Legal Fight With Google
Timothy B. Lee | Vox
“Levandowski’s firing removes a potential headache for Uber, but the company still has some serious problems. On the one hand, Uber needs to convince the courts that it did not, in fact, base its design for a key sensor on Waymo’s own designs. At the same time, Uber needs to continue making progress on its own self-driving technology.”

NASA’s First Mission to Touch the Sun Launches in 2018
Swapna Krishna | Engadget
“By sending the Parker Solar Probe into the corona of the sun, NASA is hoping to answer such questions such as: Why is the corona, the top layer of the sun’s gaseous atmosphere (visible only during a solar eclipse), hotter than its surface?”

Nest Cams Back From the Dead With New Home Monitoring Device
Vlad Savov | The Verge
“Using some deep-learning tech from Google, the Cam IQ can accurately detect what’s moving within its field of vision — whether it’s just your pet, for instance, or a shadow cast by the changing light. If it’s something more sinister, like a person, the camera can then automatically zoom in and track that person as they move around the room.”