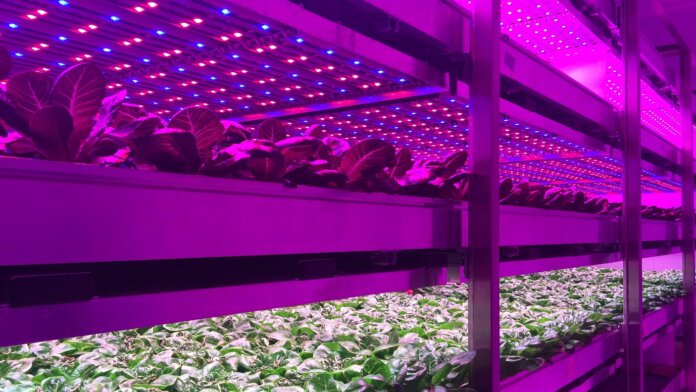 The Eindhoven High Tech Campus, a 90-minute train ride south of Amsterdam, consists of two rows of nondescript mid-rise office buildings on either side of a wide, tree-lined road. In typical Dutch fashion, there’s more parking for bikes than cars, and the campus is flanked by stretches of neatly-maintained green fields and canals.

The place doesn’t have an especially high-tech feel to it. But on the third floor of a building near the end of the road, a division of Philips Lighting called GrowWise is using technology to tackle a crucial question: what are we going to eat once there are over nine billion people on Earth?

GrowWise is a vertical farming research facility, and in conjunction with Dutch fresh food distributor Staay Food Group, it’s laying the groundwork for the first commercial vertical farm in Europe, slated to open north-east of Amsterdam in a town called Dronten later this year.

During a tour of GrowWise, I spoke with Gus van der Feltz, Global Director of City Farming, about the ins and outs of vertical farms and the opportunities and challenges the field will face in coming years.

No sun + no soil = organic plants?

Since the beginning of growing food, sunlight and soil have been fundamental ingredients. If you take away these two basic inputs, how do plants grow?

“You can think of a vertical farm as a black box,” van der Feltz said. “We look at it as an integrated system, trying to create vegetables in a closed environment.”

Before going into said ‘black box’—otherwise known as the growth rooms—we slip light blue covers over the soles of our shoes and sanitize our hands. These are minor protective measures, and they don’t prevent pathogens from entering the chamber. “If we were going into the actual growth facility we’d need to put on full protective gear,” van der Feltz said.

Outside the growth room is a winding, humming network of pipes, screens, and dials. Van der Feltz pulls back a large sandwich panel door, and when we step inside, the air is noticeably warmer and more humid. It smells like a farm, except without the manure, and it feels a little like being on a spaceship—trays of plants are stacked four levels high, hundreds of blue and red pinpoints of light beaming down on them from above. The light on the bottom two levels is white, while the top two give off a purplish glow. 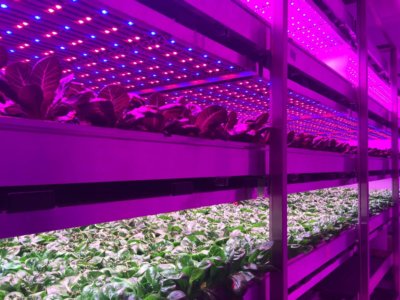 We have to raise our voices to talk over the hum of the regulators. Solar light, van der Feltz explains, is spread across a spectrum ranging from UV to infrared. In photosynthesis, red and blue wavelengths of light interact with chlorophyll to help form glucose and cellulose, the structural material in cell walls.

LEDs can reproduce this effect, and can do it faster than the sun; time from seed to harvest at GrowWise is 30-40 days, as compared to 60-65 days in a typical greenhouse, according to van der Feltz.

“What we’ve done with LEDs is optimize the conditions for growth. There are elements of sunlight that plants don’t use as efficiently, and those can be reduced or taken out,” van der Feltz said. One of those elements is heat—when I wave a hand under the lights, they feel no warmer than the rest of the room.

The crops need different intensities of light as they pass through stages of growth, and they’re constantly monitored by sensors and software that tweak their conditions as necessary. Van der Feltz explains that triggering the right combination of processes in photosynthesis, in combination with other growth factors, can also create desired effects. “With the right lighting conditions we can make lettuce turn purple or red. We can make strawberries sweeter,” he said. 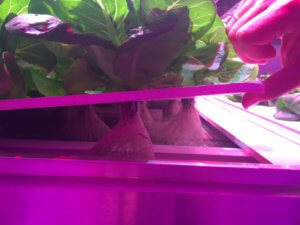 Each plant sits in a thimble-sized container of sterilized coconut bark, which serves as a substrate for germination and root development. From there the roots extend into shallow troughs of nutrient-rich water—the plants are constantly in water rather than being periodically sprayed or on a timed drip, making this hydroponic farming.

Food and the future

Though this pales in comparison to the biggest vertical farm in the world—AeroFarms’ 70,000-square-foot facility in Newark, New Jersey—it will be the largest in Europe. Outside Europe and the US, vertical farms also exist in Japan, Korea, Singapore, and Canada, and a facility much larger than Aerofarms is planned in Shanghai.

It’s no coincidence most of these farms are near big, densely-populated cities. The UN’s 2014 World Urbanization Prospects report predicts population growth and urbanization will add 2.5 billion people to the world’s big cities by 2050. That’s a whole lot of people who’ll be buying all their food rather than producing any of it.

Agricultural yields, then, will have to increase significantly, and since much of the world’s farmable land is already being farmed, we’ll need to get a bit more resourceful with our food supply.

But continued research and investment will gradually drive prices down, and as ironic as it sounds, vertical farms will eventually get all their energy from solar panels.

This will leave us with an organic growing method that requires no fertilizer or pesticides, produces no agricultural runoff or other pollution, uses a fraction of the water traditional farms use (same goes for land), and yields consistent harvests year-round, even in extreme or unusual weather.

“You can create optimal growing conditions for the crop and you don’t need to wash it,” van der Feltz said. “The washing process damages the leaves and causes them to decay faster. Having the growth facility nearby decreases travel time and means the food will be fresher.”

Would you eat food from a vertical farm? https://t.co/XV3lsRoZo1

As rosy as this all sounds, it doesn’t mean people will embrace vertically-farmed food with open arms. Food is a sensitive topic many consumers take very seriously; if we are, in fact, what we eat, people may not love the idea of eating food that, for all its merits, is grown under decidedly artificial conditions. 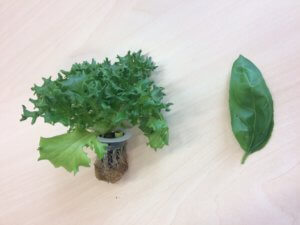 As we stood peering at the neatly glowing rows of plants, van der Feltz reached out, plucked one from its roots, and handed it to me. “Try it,” he said. So I did. I tasted the green-leaf lettuce and the basil. Both seemed to have a stronger flavor and aftertaste than the store-bought greens I’m used to, though it was nothing I’d have noticed had I not been aware of what I was eating.

Van der Feltz recognizes widespread adoption of vertically-farmed food may be a challenge. “We understand some people may feel uneasy about food grown with no sunlight,” he said. Consumer education will play a key role in getting people comfortable with purchasing and eating LED-grown greens.

At the same time, though, food preferences are shifting, and for the better as far as vertical farming is concerned. “In the Western world there’s a growing demand for convenience products that have already been washed and are ready to use,” van der Feltz explained.

His confidence in GrowWise’s products, for one, is unwavering. “We test our produce regularly for pathogens and nutritional quality, and each time the results are excellent,” he said. “They serve this lettuce here in our cafeteria. I take it home to my family. My kids love it.”