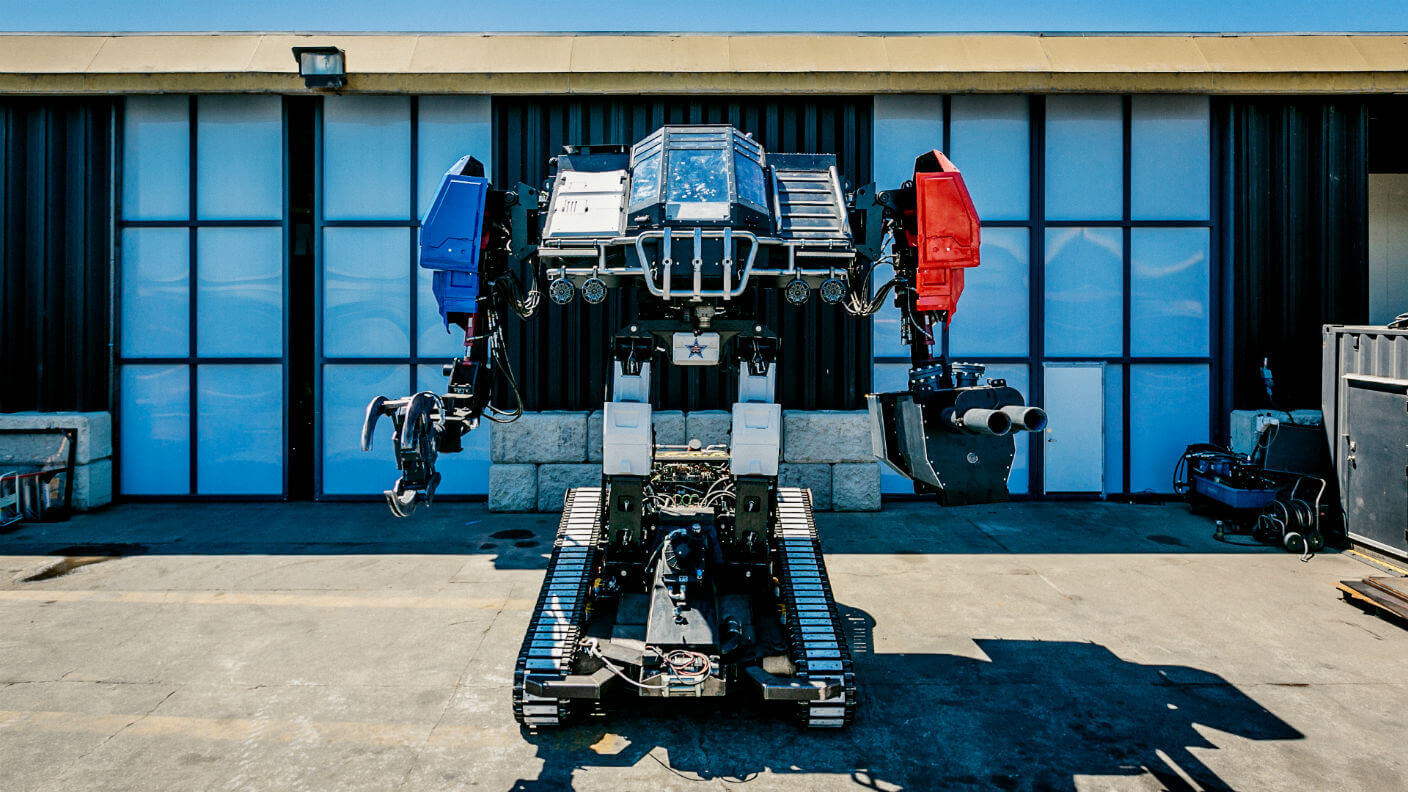 It began two years ago when MegaBots co-founders Matt Oehrlein and Gui Cavalcanti donned American flags as capes and challenged Suidobashi Heavy Industries to a giant robot duel in a YouTube video that immediately went viral.

In an equally flamboyant response video, Suidobashi CEO and founder Kogoro Kurata accepted the challenge. (Yes, he named his robot after himself.) Both parties planned to take a year to prepare their robots for combat.

In the end, it took twice the amount of time. Nonetheless, the battle is going down this September in an undisclosed location.

Oehrlein shared more about the much-anticipated showdown during our interview at Singularity University’s Global Summit.

It’s also the robot they recently shipped to take on KURATAS.

Building Eagle Prime has been no small feat. With arms and legs that each weigh as much as a car, assembling the robot takes forklifts, cranes, and a lot of caution. Fortress One, MegaBots’ headquarters in Hayward, California is where the magic happens.

In terms of “weaponry,” Eagle Prime features a giant pneumatic cannon that shoots huge paint cannonballs. Oehrlein warns, “They can shatter all the windows in a car. It’s very powerful.” A logging grapple, which looks like a giant claw and exerts 3,000 pounds of steel-crushing force, has also been added to the robot.

“It’s a combination of range combat, using the paint balls to maybe blind cameras on the other robot or take out sensitive electronics, and then closing in with the claw and trying to disable their systems at close range,” Oehrlein explains.

Suidobashi’s robot is a bit shorter and lighter, but also a little faster, so the battle dynamics should be interesting.

You may be thinking, “Why giant dueling robots?”

MegaBots’ grand vision is a full-blown international sports league of giant fighting robots on the scale of Formula One racing. Picture a nostalgic evening sipping a beer (or three) and watching Pacific Rim- and Power Rangers-inspired robots battle—only in real life.

Eagle Prime is, in good humor, a proudly patriotic robot.

“Japan is known as a robotic powerhouse,” says Oehrlein, “I think there’s something interesting about the slightly overconfident American trying to get a foothold in the robotics space and doing it by building a bigger, louder, heavier robot, in true American fashion.”

For safety reasons, no fans will be admitted during the time of the fight. The battle will be posted after the fact on MegaBots’ YouTube channel and Facebook page.

We’ll soon find out whether this becomes another American underdog story.

In the meantime, I give my loyalty to MegaBots, and in the words of Mortal Kombat, say, “Finish him!”