5 Reasons the UN Is Jumping on the Blockchain Bandwagon 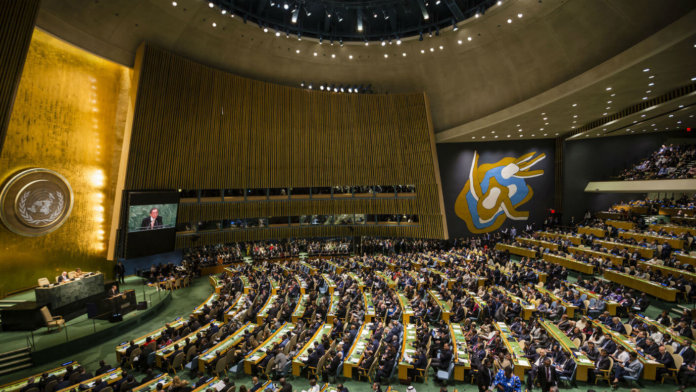 By the time they woke on May 31st, 2017, 10,000 Syrian refugees stationed at Azraq camp in Jordan had received their long-awaited aid. But instead of the typical white and blue trucks from the United Nations’ World Food Program (WFP), the aid came in the form of electronic vouchers distributed on the back of a rapidly-growing technology called blockchain, specifically the Ethereum blockchain.

Thanks to this venture’s resounding success, several UN agencies have taken notice, prompting claims that blockchain could not only be used to distribute aid to refugees across the world, but for several other philanthropic purposes too.

What Is the Ethereum Blockchain?

Ethereum is a cryptocurrency, much like the more popular Bitcoin. Cryptocurrencies function largely like traditional currencies but are entirely digital, heavily encrypted, and can be stored on and transferred with electronic devices. One of the key selling points is that they’re not controlled by a central authority, such as the US Federal Reserve Bank, meaning the currency’s amount is strictly limited to preset logarithmic growth and its value is entirely determined by market demand.

The risk of wild inflation or deflation is minimized, and the currency can be more easily transferred across borders—although this can enable criminals, as financial transactions cannot be traced as easily as they can through the heavily-regulated traditional financial system.

The technology underlying cryptocurrencies is blockchain, a public ledger that records all transactions and uses private key cryptography and peer-to-peer networking to ensure secure decentralized distribution.

The UN explains blockchain as “a distributed database that is continuously updated and verified by its users. Each added block of data is ‘chained’ and becomes part of a growing list of records, under the surveillance of network members. This technology enables the transfer of assets and the recording of transactions through a secure database.”

UN aid efforts have a historic problem of fraud, mismanagement, and bureaucratic red tape, but with the ability to circumnavigate governments and banking institutions, transferring aid via blockchain can be far more efficient.

This is especially true for the Ethereum blockchain. It is Turing complete, meaning it has its own internal code and can execute any algorithm given enough time and memory. This makes it more adaptable, allowing it to transfer just about anything, not only cryptocurrencies.

How Can It be Used by the UN?

As mentioned above, the World Food Program is already using the Ethereum blockchain in a pilot program called Building Blocks to distribute vouchers for food to refugees in Jordan. There are plans to expand the program to refugees in the other eighty countries where the WFP operates.

But this is just the beginning. Experts are brainstorming how to take advantage of the Ethereum blockchain’s adaptability.

At the UN Climate Conference in Bonn, Germany last May, using the Ethereum blockchain was proposed to help combat climate change. Alexandre Gellert Paris, an officer of the UN’s Framework Convention on Climate Change, claimed that “blockchain could contribute to greater stakeholder involvement, transparency and engagement and help bring trust and further innovative solutions in the fight against climate change, leading to enhanced climate actions.”

More specifically, blockchain could be used to facilitate trading of carbon assets, the owner of which has the right to emit a predefined amount of greenhouse gases. Companies can buy and sell these like any other asset, and this market can benefit from the increased efficiency and transparency of the Ethereum blockchain. In fact, IBM and a new organization called Energy Blockchain Lab are currently trying to adapt the blockchain to China’s carbon trading market.

Furthermore, some experts at the UN Climate Conference suggested blockchain could be used to develop peer-to-peer renewable energy trading platforms where governments, businesses, and civilians would be able to buy and sell digital assets that represent a certain amount of energy production. They have also proposed that this could facilitate crowdfunding for renewable projects, as well as enhance tracking the reduction of greenhouse gases in accordance with the Nationally Determined Contributions spelled out in the Paris Agreement.

Currently, over a billion people are not officially recognized by a government, meaning they cannot enjoy the protection and services afforded to citizens of a state, such as access to education, health care, voting, the ability to open a bank account, etc. The UN considers this one of the major problems facing the world today, prompting them to begin measures to “provide legal identity to all, including birth registration, by 2030.” So far, this has proven to be more difficult than originally envisioned.

But the ID2020 Alliance—a new organization composed of UN agencies, non-profits, companies, governments, and other enterprises—believe they can meet this goal by building a digital ID network on the back of the Ethereum blockchain. During the organization’s second summit at the UN headquarters last June, Accenture and Microsoft presented a prototype that would make identity personal, persistent, portable, and private. That is, it would be unique to only one person, live with a person from life to death, be accessible from anywhere, and could only be given out with permission.

The UN estimates around 200 million migrant workers send money across borders to support close to 800 million family members, totaling more than 400 billion dollars in 2016. According to the UN’s International Fund for Agricultural Development (IFAD), this is responsible for lifting millions out of poverty, as the money is spent on needs like food, healthcare, housing, education, and sanitation. Unfortunately, transaction costs to send remittances currently exceed $30 billion annually, with fees particularly high to the poorest countries and remote rural areas.

The Ethereum blockchain, without a central authority or middleman, allows for free transactions, thus eliminating this billion-dollar burden. It also provides increased speed, ease of use, and more privacy for both senders and receivers. IFAD and other UN organizations that deal with remittances are actively researching how to apply the Ethereum blockchain.

The UN’s International Children’s Emergency Fund (UNICEF) is considering employing the Ethereum blockchain to increase transparency and reduce what they call the “cost of trust.” Because of the difficulty of tracking international transactions and because UNICEF conducts so many of them, they suffer from some degree of mismanagement, including the potential for fraud.

This can be solved by using smart contracts, as suggested by UNICEF Ventures, a branch dedicated to improving the organization’s ability to move funds. Smart contracts work like a normal contract, in which two or more parties enter an agreement, but instead of having a third party to enforce it, the contract is executed entirely on blockchain, rendering a third party irrelevant.

For example, if person A wants to buy a website’s password from person B, they could enter into a contract in which the password is released only when the agreed amount of cryptocurrency has been transferred. The transaction would be on the public ledger, giving it far more transparency and making it more efficient, thus helping UNICEF overcome its transparency problem and function more smoothly.

Since its release in July 2015, the Ethereum blockchain has garnered significant attention as people and organizations of all types have begun to imagine virtually unlimited ways to take advantage of the transparency, security, and efficiency it offers. The UN in particular has embraced it, with seven UN agencies either investigating or implementing it for various purposes. In fact, a major summit is scheduled for the beginning of October at UN Headquarters in New York, in which the Digital Blue Helmets, the UN’s branch of technology experts, are expected to unveil some exciting new applications of the Ethereum blockchain.