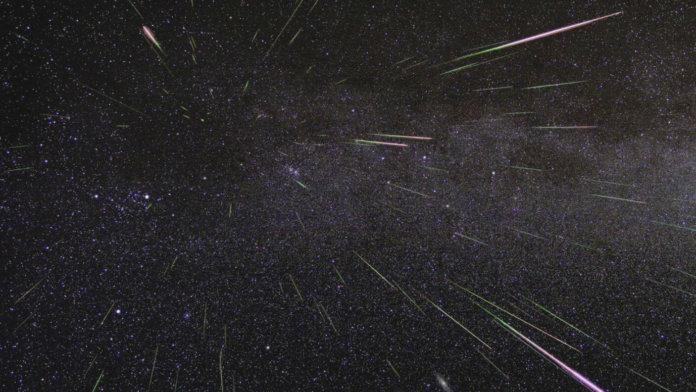 The first ever man-made meteor shower has an official launch place and time. In early 2019, the meteors will create a light show in the sky above Hiroshima and the surrounding Setouchi region. The meteors will be so bright that anyone within a 100-kilometer radius of Hiroshima will be able to see them.

The announcement was made in Tokyo, where ALE, the company behind the meteors, also revealed further details of the project and the technology behind it.

“This is, of course, a great day for our company. I hope that our mix of entertainment and science can be an inspiration and get people interested in space exploration, as well as the STEM fields in general,” Lena Okajima, founder and CEO of ALE, said.

Technology goes from dark to light

As previously described on Singularity Hub, ALE uses a cubic micro-satellite measuring around 50 centimeters on each side. The satellite travels in a sun-synchronous orbit around the poles carrying pellets, which can be released remotely from a control center on Earth. As the pellets fall through the atmosphere, friction makes them burn. Their chemical composition—a guarded secret—makes them burn brightly, as well as in different colors.

The result as seen from Earth is a man-made meteor shower that lights up the sky in a circular region with a diameter of about 200 kilometers.

The symbolism of Hiroshima as the first center of a launch is palpable. The city once so horrifyingly ravaged by technology will now be beautified by its soft glow. However, the region was primarily chosen for its clear weather during proposed launch times and good dialogue with local government officials.

ALE’s project went viral in news media in 2016. Since the media storm died down, the company has been busy further perfecting its technology ahead of its first launch.

The satellite body, designed together with Tohoku University, payload release mechanism, and pellets have all been improved.

“It is a generally accepted truth in the space industry that if something breaks, it is usually a mechanical part. Our system is by nature mechanical, so we have included a lot of fail-safe mechanisms. We are also in the early stage of testing 300 pellets and seeing how they perform in our vacuum chamber,” Josh Rodenbaugh, responsible for satellite operations at ALE, says. 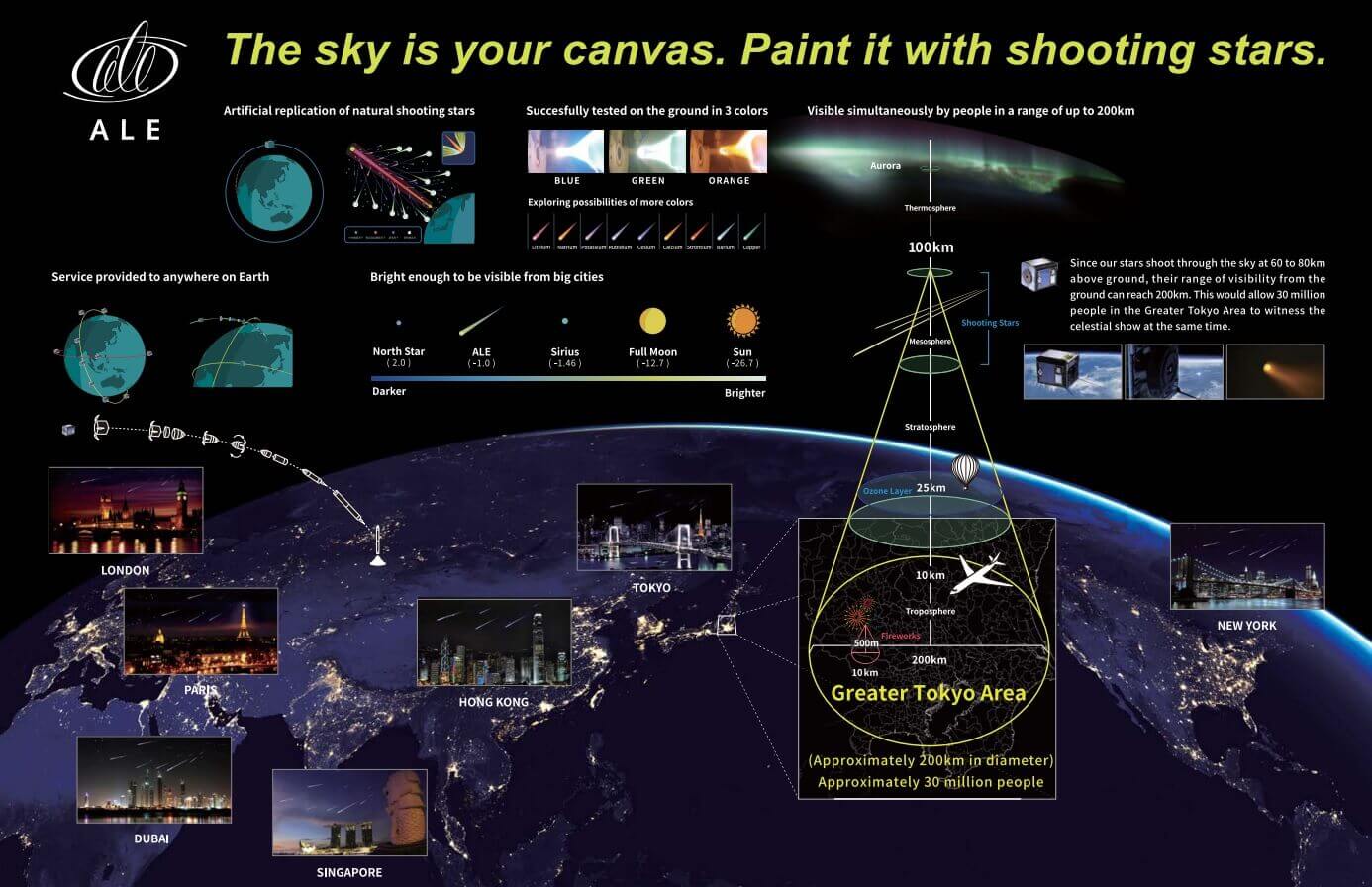 The tweaks include making the payload delivery system more compact and adjusting the composition of the pellets. ALE has also been busy with the magic mountain ride of any project—paperwork.

“Usually there are no unanswered questions when you launch a satellite. It has almost always been done many times before. We are launching an aerospace entertainment satellite. It is a first, so there is no category for that in the forms you need to send in to get your launch approved,” Rodenbaugh explains.

ALE will be launching two satellites. One will be sent into an orbit around 400 kilometers above Earth and be operational almost immediately. The second will be launched to a higher orbit and gradually descend to its operational height. Both satellites are considered demonstrators and contain 200-300 pellets in a single color.

In theory, the firing process is as follows: once stable and pointing in the wished direction, the satellite releases one or several pellets. Flying along at 7.45 kilometers a second (about 250-270 times the highway speed limit, depending on where you live), the satellite can alter its angle in relation to Earth and release pellets at different intervals. 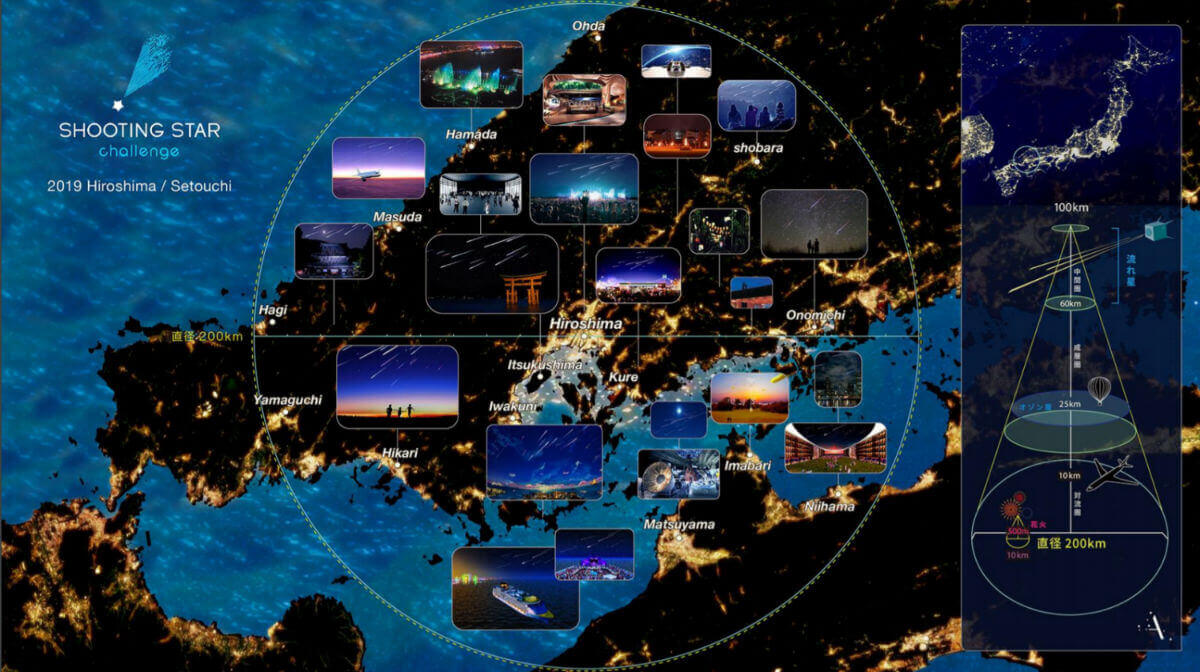 As a result of the different angles and release times, the pellets can be made to burn over a specific area at specific intervals, creating a meteor shower. The pellets burn from 100 kilometers above Earth to about 80-60 kilometers, well outside the 12-15 kilometer height where airplanes fly. The safety of planes is highlighted by Japan Airlines (JAL), along with convenience store chain Family Mart, being the main sponsor of the first project. JAL has said it is considering special ‘meteor-gazing’ flights to coincide with the launch of the meteors.

The company refers to its meteor showers as the first example of aerospace entertainment. Its meteor showers also hold big promise for scientists, as the time, location, and chemical composition of their meteors can be known in advance.

It emerges at a time when space technology, spearheaded by SpaceX, seems to be headed into an entrepreneur-led renaissance.

“The first object in space was launched 60 years ago in 1957. 12 years later we had a man on the moon. Since 1972, mankind hasn’t ventured much further than 500 kilometers from Earth. I think the golden era of space exploration was epitomized by a no-holds-barred approach similar to what private companies use today,” Josh Rodenbaugh says.

While that may lead to ALE finding itself face to face with copycat companies within five years, he and the company believe their pellets will be the difference-maker by burning brighter and in more colors than their future competitors’.

As stated by Lena Okajima, the project will hopefully help generate new interest in space exploration and inspire even more entrepreneurs to join the space renaissance.