The Tantalizing Dream of Blanketing the Sahara in Solar Panels 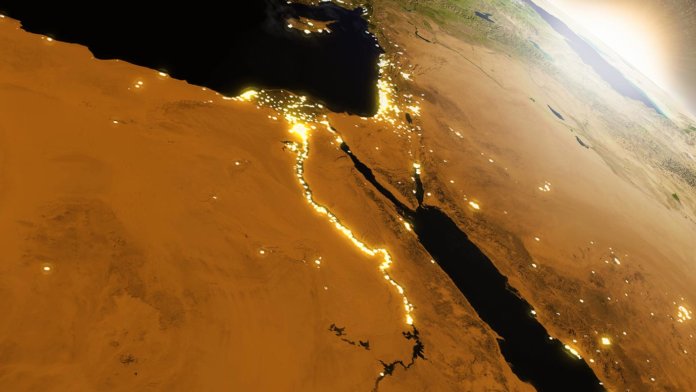 In 1986, a power surge during a safety test of the reactor at Chernobyl caused a catastrophic explosion. Thirty-one people were directly killed by the explosion and the initial dose of radiation, and several more may have died due to the lasting effects of the fallout. Alongside the Fukushima event in 2011, it is one of only two nuclear power disasters to be rated as a maximum severity event, ominously referred to as level 7. All over the world, support for nuclear power plummeted.

But in Germany, Gerhard Knies—a particle physicist—was inspired to ask a simple question. Fossil fuels such as coal, oil, and natural gas: their energy flowed from the sun. It took a tortuous path through plants and animals that were buried for thousands of years to get to us. The radioactive uranium that fueled nuclear power plants was also forged as a trace byproduct of nuclear fusion in stars. Would it not be easier, cheaper, and cleaner to get our energy directly from the sun?

Knies did a simple back-of-the-envelope calculation and worked out that, in just six hours, the world’s deserts receive more solar energy than the entire human race consumes in a year. The energy needs of the world could be met by covering just 1.2 percent of the Sahara desert in solar panels. Knies likely wasn’t even thinking about carbon emissions—just the fact that fossil fuels would one day run out—but climate change provides an even starker motivation for pursuing the project. And of course, it just seems so simple: Knies himself was frustrated about it, questioning, “Are we, as a species, really so stupid as to not make a better use of this resource?”

Of course, it is difficult to persuade people to invest in such a grand and ambitious scheme—and one that requires an awful lot of overhead investment before realizing any profit—but the Desertec initiative was a real attempt to demonstrate the concept could work.

The plan was to put solar panels in the Sahara that would power a great deal of the Middle East and North African (MENA) energy needs, while also allowing for a valuable (€60 billion) energy export industry that would power 15 percent of Europe’s electricity requirements. Meanwhile, the Europeans—by importing the plentiful desert power—would save €30/MWh on their electricity bills. Everyone would win—in the long run.

The Desertec project began in earnest in 2009, and quickly had a number of industry partners lined up, including EON, Deutsche Bank, and Siemens. Their investment would be necessary, as the project was estimated to cost €400 billion—although it had a prayer of paying for itself after some years of operation. But the project stalled, and by 2014 the seventeen initial industry partners who had signed up had dwindled to just three.

So what went wrong with Desertec? A combination of two different sets of factors. The first are the issues that have plagued the transition to renewable energy for decades now. The second are the unique geopolitical and logistical challenges of solar panels in the Sahara more specifically. Both are worth looking into.

Going the Distance, Bridging the Gaps

First, the general issues with renewable energy. The Desertec plan called for a centralized power station that would deliver electricity across three continents and transporting that electricity across such long distances can be a problem.

The plan was to use high-voltage DC power lines—rather than the AC power lines we’re familiar with. Across longer distances, the energy losses can be as little as 3 percent per 1,000 kilometers, which is much lower than AC power lines. But nothing had ever been built on that scale before; the longest link is in Brazil, the Rio Madeira line, and transports 6.3 GW across around 2,400 kilometers. For Desertec to be a success, 30 GW of power would need to be transported from the Sahara to Europe—more than 3,000 kilometers. Yet this may seem more feasible with the news in July 2016 that the Chinese are funding a high-voltage DC power line that will transport 12 GW across 3,000km.

It’s not just about transporting the power. A major issue with renewables is the intermittency problem—what do you do when the sun doesn’t shine?

Storage is part of the solution, but as yet, an unsolved part: global storage is currently dominated by pumped-storage hydroelectricity. This simple technique accounts for 99 percent of storage worldwide, but with worldwide storage at 127 GW, it’s still less than 1 percent of all power used globally. Energy industry researchers talk about a hypothesized “European super-grid” that allows for the transmission of power from regions of excess production to regions of excess need. The same thing happens internally in countries to ensure a constant supply of electricity, but they have the advantage of depending on fossil fuel plants where the energy production can be ramped up or down at will.

There are precedents for this kind of system: France and the UK are connected by a 2 GW power line. High-voltage DC allows power to be sent in both directions, depending on demand; usually, the British import French electricity, but not always. The fjords of Norway allow them to produce 98 percent of their electricity in hydroelectric plants; the winds of Denmark allow them to produce 50 percent of their electricity by renewables; and cables across Scandinavia ensure that everyone can obtain power whether the wind’s blowing or the sun is shining. Studies have indicated that the Mediterranean, with better interconnectivity and a source of power like Desertec, could supply 80 percent of its electricity needs by solar alone without worrying about intermittency.

But as people were looking into the project to center the world’s power supply in Libya and Algeria, there were more specific problems—namely, a civil war in Libya, and although the Arab Spring initially boosted hopes for the plan, the continuing political instability in the Sahara has spooked some investors. Combine that with the fact that the project was never intended to be finished until 2050, and industrial partners would have to be persuaded away from more near-term opportunities for profit.

Then there is the more delicate political issue of natural resource rights.

Like many bold, futuristic projects, the little matter of governments can get in the way of something like Desertec. Countries have been made rich through exports of oil or coal; could sunlight one day fulfill a similar role? On the surface, this is another bonus to the Desertec scheme; poorer countries in Africa have something incredibly valuable to export to the rest of the world, while amply supplying their own energy needs. In practice, there has been skepticism on the ground that this isn’t just another imperialist exploitation move. Daniel Ayuk Mbi Egbe of the African Network for Solar Energy said, “Europeans make promises, but at the end of the day, they bring their engineers, they bring their equipment, and they go. It’s a new form of resource exploitation, just like in the past.”

There is another, slightly more hopeful reason that Desertec has stalled.

It backed CSP—concentrated solar power—where parabolic mirrors concentrate sunlight, which boils steam to drive wind turbines. This was the technology that brought Siemens on board. The only problem is that, as Desertec was being developed, the price of solar panels (solar photovoltaics) fell off a cliff. From 2009 to 2014, the levelized cost of electricity (taking into account construction, maintenance, fuel, etc.) of solar photovoltaics fell by 78 percent, and it’s still going down. In just five years, photovoltaics became five times cheaper. This was one of the reasons Siemens cited for abandoning the project.

Desertec continues in a smaller form; they’re still building power plants in Morocco to supply the local energy needs of that country. Perhaps a ground-up approach, where MENA countries increase their own solar production in the desert before becoming net exporters, will provide the solution. This project is not the first wildly ambitious scheme to provide for the world’s energy needs that has stalled; historians remember Atlantropa, a scheme to dam the Strait of Gibraltar and use it for hydroelectric power that had some interest in the 1920s.

Yet the prospect remains tantalizing. Surely, when only a tiny fraction of the Earth’s surface need be devoted to energy production to provide us with more power than we could ever dream of consuming, we won’t wreck the planet by getting that energy through dirty and dangerous means. To starry-eyed idealists, it must seem equivalent to being on a raft in a lake full of drinking water—and choosing instead to swig from a bottle of seawater in your backpack. Solar power in the world’s deserts is one of the few feasible, renewable ways of providing energy on the scale we currently demand as humans. Someday, we will make better use of the abundant energy from the sun. We’ll have to.