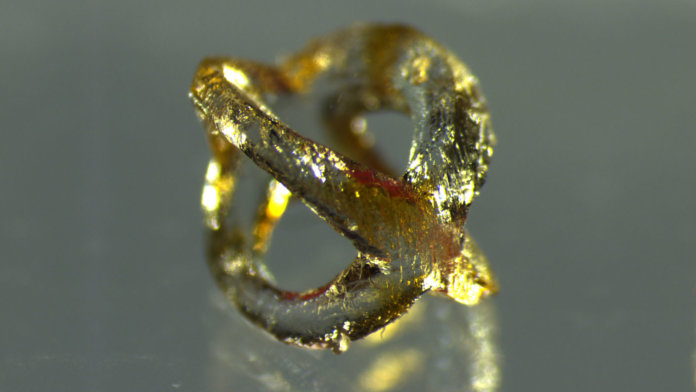 3D printing allows engineers to custom build intricate structures impossible with traditional manufacturing, but the layer-by-layer approach can be slow and limits the shapes that can be built. A new technique can now fabricate entire 3D shapes in seconds using holographic light fields.

The technique, developed by researchers at the Lawrence Livermore National Laboratory, uses special resins that solidify when they are exposed to light. By shining three laser beams at a vat filled with the resin to create a 3D pattern of light, they were able to fabricate 3D structures in one go in just 10 seconds.

Most 3D printing approaches build structures layer-by-layer by depositing either individual dots of material, filaments, or entire layers at once. This means the 3D structures created are actually stacks of 2D layers, says LLNL engineer Maxim Shusteff, who led the research, which can introduce artifacts at the points where they join that result in a rough finish.

It can also make certain structures impossible to build without support, for example, building from the bottom up makes it hard to build sub-structures that hang down from upper layers. Being able to build the entire structure all in one go has the double benefit of removing the limitations of layer-by-layer approaches and dramatically increasing the speed of the system.

“This is the first demonstration of a practical way of making 3D parts all at once,” Shusteff told Singularity Hub. “It’s the next step in the progress of additive manufacturing technology.”

In a paper in the journal Science Advances, the researchers describe how the system works by splitting a 3D holographic image into three distinct parts. These are then projected into the resin tank by separate laser beams that enter through its front, base, and side, creating a 3D light field where they overlap.

The resin the researchers used is a photopolymer that reacts to light by solidifying once a certain energy threshold has been passed, so after a few seconds of exposure to the light field they were able to drain the tank of liquid resin, leaving behind the 3D structure.

The group used their technique to build a series of millimeter-scale shapes such as cubes, pyramids, and lattices, but Shusteff says that with optimization the approach should be capable of resolutions of just a few micrometers.

The amount of power required to ensure even light distribution in large vats of the resin mean the approach is unlikely to be suitable for large structural parts, but Shusteff says building parts on the scale of 1,000 cm3 is very feasible.

“We haven’t really pushed the boundaries of what this is capable of, so we’re talking in very general terms about application areas at the minute,” he says. “Any place where polymer structures are useful it could advance the state of the art.”

Of particular interest to the researchers are biomedical implants, where having a large degree of flexibility in the shapes you can produce, coupled with high resolution, could be very helpful.

There has been a growing amount of research looking at bioprinting living tissue, which often uses bio-inks made of living cells suspended in biocompatible substances like hydrogels. These materials are often soft and easily deformable, making printing methods involving a lot of movement undesirable, says Shusteff, so their static approach could be a promising alternative.

“This is an intriguing approach toward advancing the speed of 3D fabrication with photopolymers,” said Joseph DeSimone, a chemistry professor at the University of North Carolina and co-founder of 3D printing company Carbon. “They’ll need to have hardware advances coupled with software and resins to pull this together. But it’s exciting.”

Shusteff agrees there’s still considerable work to do. For a start, the material properties of photopolymers are still limited, though he says additive manufacturing is spurring large amounts of research aimed at solving this problem and the field is growing quickly.

The researchers also think there may be better ways of creating the 3D light fields than holography. Shusteff says they decided to exploit the discipline because it had well-developed theories about how to record or reconstruct 3D structures in light.

But holography requires the use of complicated optical equipment that pushes up costs, and lasers that are prone to “laser speckle,” where the laser light interferes with itself, adding spatial noise to the beam and causing surface roughness.

Fortunately, they say it should be possible to achieve the same effect using LEDs as the light source and amplitude modulation in place of holography. “We’ve taken a really good first shot at this, but we’ve not yet taken it to the limit of its performance, so the space is wide open for us and others to demonstrate what this approach is capable of,” says Shusteff.

The group is already experimenting with a resin vat that spins on its axis as an LED light source varies the pattern of light it projects. Shusteff says this gives them even more geometric flexibility while only being marginally slower, taking minutes rather than seconds for each structure.