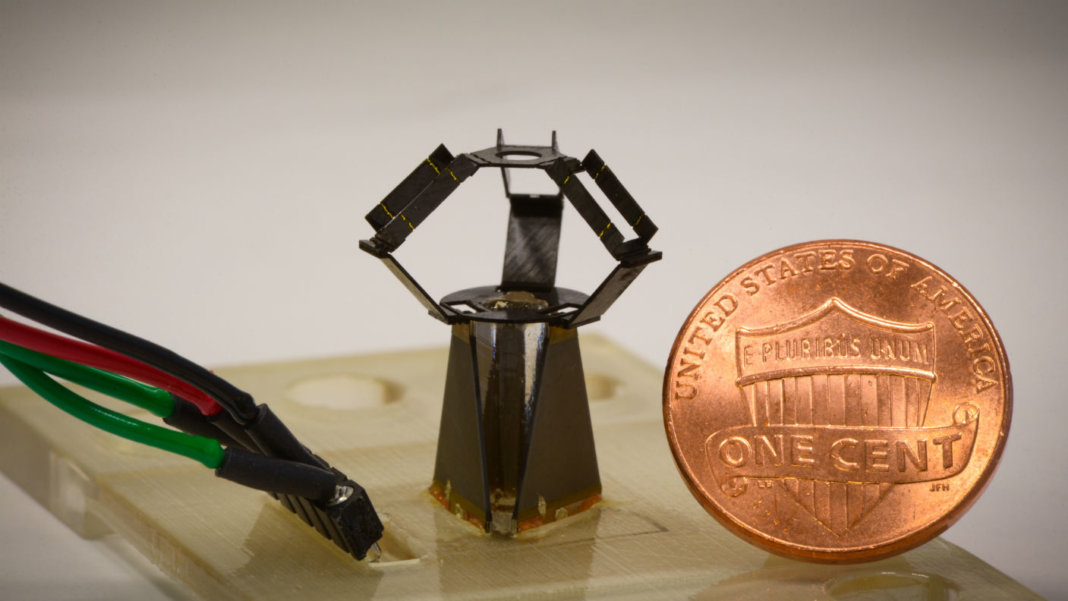 They say size isn’t everything, but when it comes to delta robots it seems like it’s pretty important.

The speed and precision of these machines sees them employed in delicate pick-and-place tasks in all kinds of factories, as well as to control 3D printer heads. But Harvard researchers have found that scaling them down to millimeter scale makes them even faster and more precise, opening up applications in everything from microsurgery to manipulating tiny objects like circuit board components or even living cells.

Unlike the industrial robots you’re probably more familiar with, delta robots consist of three individually controlled arms supporting a platform. Different combinations of movements can move the platform in three directions, and a variety of tools can be attached to this platform.

The benefit of this design is that unlike a typical robotic arm, all the motors are housed at the base rather than at the joints, which reduces their mechanical complexity, but also—importantly—the weight of the arms. That means they can move and accelerate faster and with greater precision.

It’s been known for a while that the physics of these robots means the smaller you can make them, the more pronounced these advantages become, but scientists had struggled to build them at scales below tens of centimeters.

In a recent paper in the journal Science Robotics, the researchers describe how they used an origami-inspired micro-fabrication approach that relies on folding flat sheets of composite materials to create a robot measuring just 15 millimeters by 15 millimeters by 20 millimeters.

The robot dubbed “milliDelta” features joints that rely on a flexible polymer core to bend—a  simplified version of the more complicated joints found in large-scale delta robots. The machine was powered by three piezoelectric actuators, which flex when a voltage is applied, and could perform movements at frequencies 15 to 20 times higher than current delta robots, with precisions down to roughly 5 micrometers.

One potential use for the device is to cancel out surgeons’ hand tremors as they carry out delicate microsurgery procedures, such as operations on the eye’s retina. The researchers actually investigated this application in their paper. They got volunteers to hold a toothpick and measured the movement of the tip to map natural hand tremors. They fed this data to the milliDelta, which was able to match the movements and therefore cancel them out.

In an email to Singularity Hub, the researchers said that adding the robot to the end of a surgical tool could make it possible to stabilize needles or scalpels, though this would require some design optimization. For a start, the base would have to be redesigned to fit on a surgical tool, and sensors would have to be added to the robot to allow it to measure tremors in real time.

Another promising application for the device would be placing components on circuit boards at very high speeds, which could prove valuable in electronics manufacturing. The researchers even think the device’s precision means it could be used for manipulating living cells in research and clinical laboratories.

The researchers even said it would be feasible to integrate the devices onto microrobots to give them similarly impressive manipulation capabilities, though that would require considerable work to overcome control and sensing challenges.