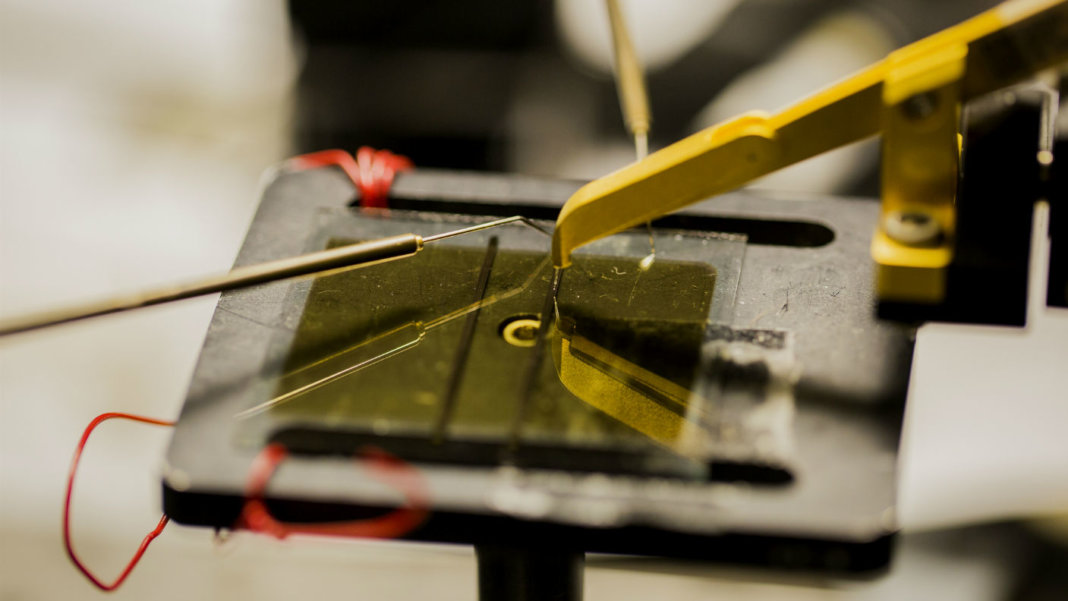 The age of fossil fuels is coming to an end, and the age of renewable energy has dawned—or, it will be dawning soon. In 2014 the World Bank estimated that over 80 percent of the world’s energy came from fossil fuels. That figure is set to drop as countries adopt ambitious goals to move towards solar, wind, and other renewable energy sources.

While it might be possible to meet these targets with current technology, it certainly wouldn’t be easy, nor cheap. To make renewables a widespread, affordable reality, the way we produce, transfer, and store their energy needs to get better.

A study published last week in Nature by University of Michigan researchers shows potential for a significant advance in solar energy production. The researchers were able to get electrons to travel not only farther than they ever had before, but farther than was even thought possible in the materials used to make organic solar cells.

The vast majority of solar panels in use today are inorganic and silicon-based. They’re more efficient (the current record stands at 26.6 percent efficiency, reached in Japan in 2016) and have a longer lifespan than organics, but they’re also much more expensive to manufacture.

Organic solar cells, on the other hand, are made of polymers, most commonly plastic. This means they can be assembled using existing polymer processing technologies, which makes them cheap to produce—but their efficiency is half that of inorganics at 13.1 percent.

In other words, you’ll get double the energy from a silicon-based cell than you will from a polymer-based cell of the same size. This is unfortunate, because besides being lower-cost, organic cells are also thin, flexible, and transparent. That means they can be unobtrusively applied to pretty much anything—namely, for example, to the 5 to 7 billion square meters of glass surface that exist in the US alone.

To understand why the U of M team’s research is significant, it helps to first understand how solar panels work.

As photons from the sun hit the atoms in a solar cell, the atoms’ electrons are dislodged and begin to move between atoms, producing an electric current. The cells contain a built-in electric field that forces the freed electrons to flow in one direction. Adding metal contacts to the cell allows this current to be drawn off for external use.

The U of M team discovered that a thin layer of fullerene molecules, which are made of carbon and are also called Buckyballs, can enable electrons to travel up to several centimeters from the atom they’re knocked off of upon interaction with a photon. It doesn’t sound like much, but it’s an incredible increase from the few hundred nanometers electrons typically travel in organic cells.

The researchers layered a thin film of fullerenes onto an organic cell’s power-producing layer, then added an additional layer to prevent the electrons from escaping. They found that the electrons traveled freely through the material, including outside the power-generating area of the cell. They determined that the fullerene layer formed an ‘energy well,’ a low-energy area that prevented the negatively-charged electrons from recombining with the positive charges left behind in the power-producing layer.

“You can imagine an energy well as sort of a canyon—electrons fall into it and can’t get back out,” said Caleb Cobourn, a graduate researcher in the U of M physics department and an author on the study. “So they continue to move freely in the fullerene layer instead of recombining in the power-producing layer, as they normally would. It’s like a massive antenna that can collect an electron charge from anywhere in the device.”

The implications of the discovery for solar power are that freely-moving, farther-traveling electrons in organic semiconductors could enable manufacturers to shrink solar cells’ conductive electrode into an invisible grid, resulting in transparent cells that could be used on glass surfaces.

Stephen Forrest, the Michigan engineering professor who led the research, did make it clear that widespread use of his team’s discovery in solar cells is theoretical at this point. But he also noted the discovery’s larger implications for understanding and exploiting the properties of organic semiconductors.

“This discovery essentially gives us a new knob to turn as we design organic solar cells and other organic semiconductor devices,” said Quinn Burlingame, a U of M graduate researcher and author of the study. “The possibility of long-range electron transport opens up a lot of new possibilities in device architecture.”

This Powerful Tidal Turbine Will Power 2,000 Homes in the UK

The US Just Set Ambitious Offshore Wind Power Targets. What Will It Take to Meet Them?