Chinese Scientists Just Cloned a Monkey—Here Are the Details 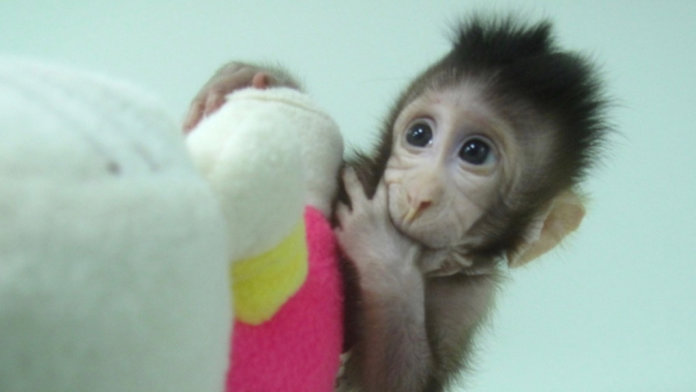 In 1996, Dolly the sheep became the first mammal to be cloned from a somatic cell. Twenty years later, scientists have succeeded in using the same technique on primates—as detailed in a study published today in the journal Cell, two long-tailed macaque monkeys were born at the Chinese Academy of Sciences Institute of Neuroscience in Shanghai.

How were the monkeys cloned?

Zhong Zhong and Hua Hua (named after the Chinese “Zhonghua,” which means Chinese nation or people) were made by somatic cell nuclear transfer (SCNT). In this technique, scientists take the nucleus out of a healthy, unfertilized egg, then replace it with the nucleus from a somatic cell (any cell other than a reproductive cell). The resulting embryo is then implanted into a surrogate, and that surrogate gives birth to a clone of whatever donated the nucleus. The monkeys were cloned using fetal connective tissue cells called fibroblasts.

Cloning can also be achieved using a technique called embryo splitting, which is the way twins or triplets occur naturally inside a mother’s womb.

What will the clones be used for?

So what’s the point of cloning monkeys, anyway? There must be a better motivation than ‘because we can’ or ‘to create a genetically-identical tiny primate army.’

Monkeys are the animal genetically most similar to humans. Using primates for research, then, can get us a lot closer to answering questions about our own biology and health than using, say, mice. And talk about having a reliable control group; in a genetically identical population, scientists can isolate and study specific traits or genes.

“There are a lot of questions about primate biology that can be studied by having this additional model,” says senior author of the study Qiang Sun, Director of the Nonhuman Primate Research Facility at the Chinese Academy of Sciences Institute of Neuroscience. “You can produce cloned monkeys with the same genetic background except the gene you manipulated. This will generate real models not just for genetically based brain diseases, but also cancer, immune, or metabolic disorders and allow us to test the efficacy of the drugs for these conditions before clinical use.”

Who’s making sure the monkeys are treated humanely?

Cloning comes with a slew of major ethical considerations, from whether the cloned animals are treated humanely during research to whether we should be cloning animals at all. Is it inherently wrong to create a life solely for the purpose of research?

The Chinese team is following strict international guidelines for animal research set by the US National Institutes of Health. “We are very aware that future research using non-human primates anywhere in the world depends on scientists following very strict ethical standards,” said Muming Poo, a co-author on the study.

Why did it take over 20 years to clone a monkey?

Dolly was the first mammal to be cloned using SCNT, but she certainly wasn’t the last. Since 1996, goats, pigs, cows, mice, rabbits, horses, dogs, and cats have all been cloned, as have additional sheep, fairly easily. Monkeys, though, have proved more difficult, for reasons scientists still don’t totally understand.

The study explains that the nuclei of monkey cells are highly resistant to transfer, especially in adult cells. The scientists did make clones using adult donor cells, but those monkeys died shortly after birth.

The team had more success using nuclei from fetal cells, and applying epigenetic modulators—genes that regulate genetic expression—to re-activate suppressed genes in the nucleus, which allowed the embryo to develop.

Is this a stepping stone to cloning humans?

If monkeys are our closest animal relative and they’ve been successfully cloned, it’s only natural to wonder whether we’re next.

Even in animal species where cloning has been successful, many cloned embryos don’t develop properly; they often die shortly after birth, or manifest unexpected defects like heart or respiratory problems later in life.

But while reproductive cloning—the method used to make Dolly, Zhong Zhong, and Hua Hua—could have dystopian consequences if performed on humans, therapeutic cloning—creating an embryo using a person’s genetic material, but not allowing that embryo to develop beyond the cellular stage—could work wonders for regenerative medicine.

Therapeutic cloning produces stem cells that are genetically identical to the donor’s, and thus ideal for use in therapies to treat various diseases, eliminating the possibility of rejection by the donor’s immune system.

For now, it seems we need not worry about coming across our genetically-identical doppelganger on a random city street. However, the conversation—and debate—around cloning ethics will undoubtedly escalate as the technology advances.

So how will the baby monkey clones fare? Whether they’ll develop health problems is unknown. For now, the scientists who made Zhong Zhong and Hua Hua are keeping a close eye on their physical and intellectual development, and they appear to be growing normally as compared to naturally-born monkeys their age. The team is expecting more macaque clones to be born over the coming months.