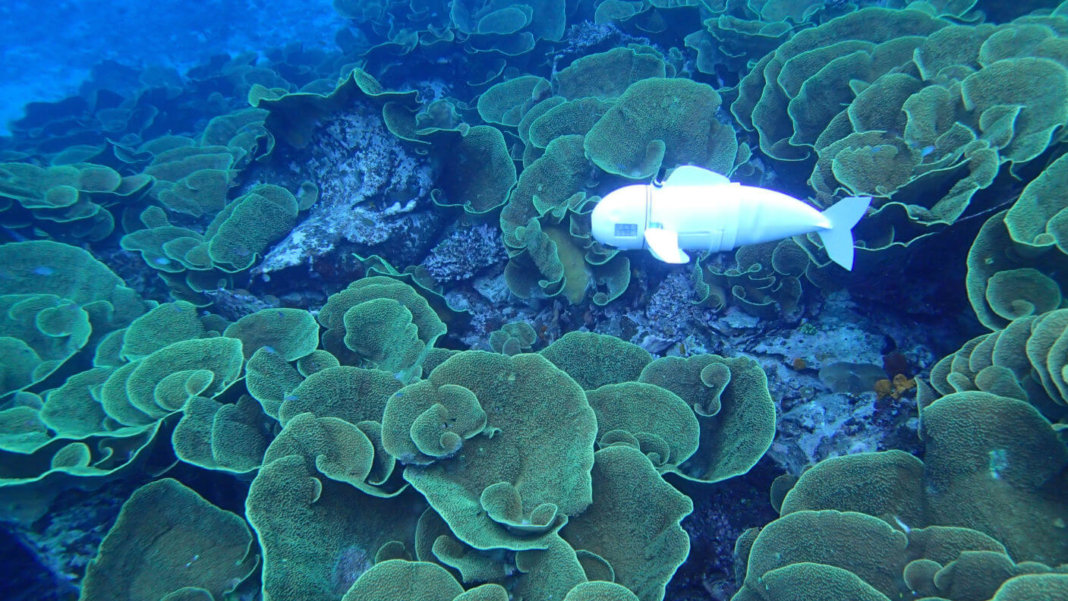 Earth’s oceans are having a rough go of it these days. On top of being the repository for millions of tons of plastic waste, global warming is affecting the oceans and upsetting marine ecosystems in potentially irreversible ways.

Coral bleaching, for example, occurs when warming water temperatures or other stress factors cause coral to cast off the algae that live on them. The coral goes from lush and colorful to white and bare, and sometimes dies off altogether. This has a ripple effect on the surrounding ecosystem.

Warmer water temperatures have also prompted many species of fish to move closer to the north or south poles, disrupting fisheries and altering undersea environments.

To keep these issues in check or, better yet, try to address and improve them, it’s crucial for scientists to monitor what’s going on in the water. A paper released last week by a team from MIT’s Computer Science and Artificial Intelligence Laboratory (CSAIL) unveiled a new tool for studying marine life: a biomimetic soft robotic fish, dubbed SoFi, that can swim with, observe, and interact with real fish.

SoFi isn’t the first robotic fish to hit the water, but it is the most advanced robot of its kind. Here’s what sets it apart.

It swims in three dimensions

Up until now, most robotic fish could only swim forward at a given water depth, advancing at a steady speed. SoFi blows older models out of the water. It’s equipped with side fins called dive planes, which move to adjust its angle and allow it to turn, dive downward, or head closer to the surface. Its density and thus its buoyancy can also be adjusted by compressing or decompressing air in an inner compartment.

“To our knowledge, this is the first robotic fish that can swim untethered in three dimensions for extended periods of time,” said CSAIL PhD candidate Robert Katzschmann, lead author of the study. “We are excited about the possibility of being able to use a system like this to get closer to marine life than humans can get on their own.”

The team took SoFi to the Rainbow Reef in Fiji to test out its swimming skills, and the robo fish didn’t disappoint—it was able to swim at depths of over 50 feet for 40 continuous minutes. What keeps it swimming? A lithium polymer battery just like the one that powers our smartphones.

SoFi has sensors to help it see what’s around it, but it doesn’t have a mind of its own yet. Rather, it’s controlled by a nearby scuba-diving human, who can send it commands related to speed, diving, and turning. The best part? The commands come from an actual repurposed (and waterproofed) Super Nintendo controller. What’s not to love?

Previous robotic fish built by this team had to be tethered to a boat, so the fact that SoFi can swim independently is a pretty big deal. Communication between the fish and the diver was most successful when the two were less than 10 meters apart.

It looks real, sort of

SoFi’s side fins are a bit stiff, and its camera may not pass for natural—but otherwise, it looks a lot like a real fish. This is mostly thanks to the way its tail moves; a motor pumps water between two chambers in the tail, and as one chamber fills, the tail bends towards that side, then towards the other side as water is pumped into the other chamber. The result is a motion that closely mimics the way fish swim. Not only that, the hydraulic system can change the water flow to get different tail movements that let SoFi swim at varying speeds; its average speed is around half a body length (21.7 centimeters) per second.

Besides looking neat, it’s important SoFi look lifelike so it can blend in with marine life and not scare real fish away, so it can get close to them and observe them.

“A robot like this can help explore the reef more closely than current robots, both because it can get closer more safely for the reef and because it can be better accepted by the marine species.” said Cecilia Laschi, a biorobotics professor at the Sant’Anna School of Advanced Studies in Pisa, Italy.

It sounds like this fish is nothing short of a regular Nemo. But its creators aren’t quite finished yet.

They’d like SoFi to be able to swim faster, so they’ll work on improving the robo fish’s pump system and streamlining its body and tail design. They also plan to tweak SoFi’s camera to help it follow real fish.

“We view SoFi as a first step toward developing almost an underwater observatory of sorts,” said CSAIL director Daniela Rus. “It has the potential to be a new type of tool for ocean exploration and to open up new avenues for uncovering the mysteries of marine life.”

The CSAIL team plans to make a whole school of SoFis to help biologists learn more about how marine life is reacting to environmental changes.