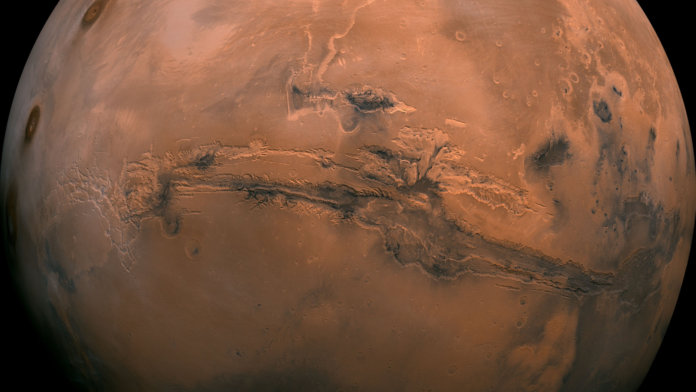 As humans spread out into the cosmos in search of life, the most alien organisms we encounter may be those we bring with us. Researchers at NASA and elsewhere are engineering microbes so they can carry out many of the functions needed to support human life off-planet.

Humans have been harnessing microbes to do useful work for us for millennia. We’ve used them to make bread, beer, and cheese, and more recently they’ve been put to work to produce medicine, provide fertilizer for crops, and even generate biofuels.

But the emerging field of synthetic biology holds the promise of greatly expanding the things microbes can do for us. Advances in gene editing technology are allowing scientist to re–engineer microbes’ genomes to carry out entirely novel functions like producing chemicals not found in nature, acting as biosensors, and even carrying out computation.

These diverse capabilities have caught the eye of NASA, particularly as it looks towards a mission to Mars. A major challenge for space exploration is the huge cost of taking the materials required to support life with us into space, and for longer missions further from Earth it could take many months to send new supplies. Things like medicines and food also degrade over time, so even if we have space to carry them, they may not last long.

That’s why NASA is investigating using microbes to produce both vital nutrients and building materials off–planet. The vision for nutrition is to have just-add-water packs containing microbes genetically engineered to produce specific nutrients. They’ve already demonstrated the concept with genetically engineered yeast that produces zeaxanthin, a key nutrient for eye health.

For building material, the aim is to use physical and chemical methods to convert carbon dioxide—which is plentiful in the atmosphere of Mars—into simple organic molecules. Genetically engineered microbes can then use these to produce plastics, fibers, and other types of feedstock that could be combined with 3D printers to manufacture habitats, tools, and spare parts on demand.

NASA’s not the only one trying to repurpose microbes for space applications. Researchers at the University of California, Berkeley are designing microbes that could help make the Martian soil more amenable to plant life.

Hopes of farming on the red planet hit a big setback when NASA’s Phoenix lander detected high levels of perchlorate, a salt that can be toxic to living things, in its soil in 2008. But the Berkeley team is designing microbes that can simultaneously reduce the perchlorate in the soil while enriching it with the ammonia needed to help plants grow.

While not solely focused on space applications, researchers at MIT have created a synthetic biology system that could create customized medicines on demand. Rather than using entire organisms, they’ve freeze-dried sections of DNA and other biomolecules into pellets that can be rehydrated to start producing medicines.

The portable system can be used to make designer antibodies to tackle a range of diseases at a fraction of the cost of traditional approaches, and the pellets can be transported at room temperature and require no expertise to use.

While these projects are already underway, other researchers are looking further into the future.

In 2015, researchers from NASA and Berkeley outlined the potential opportunities, near and far, for using microbes to support humans off–planet in a paper in the Journal of the Royal Society Interface. These include the kinds of projects already underway to produce building feedstocks, medicines, and nutrients, but also more ambitious plans of genetically engineering microbes to produce acid that can extract valuable components from rocks, creating biological glues (like those mussels use to stick to rocks) that could bind Mars dust together to form bricks.

The researchers also say there’s scope for producing a closed-loop system where all waste products are recycled by microbes to produce useful byproducts. Genetically engineered microbial fuel cells could extract useful chemicals like nitrogen and phosphorus from wastewater at the same time as generating electricity.

The bacteria used to compost solid waste can be used to produce nitrous oxide, a potential rocket fuel. If we could engineer microbes to colonize the walls of habitats, they could simultaneously recycle carbon dioxide into breathable oxygen and provide a self-healing layer of radiation protection.

Looking even further into the future, the researchers posit that eventually these synthetic organisms could be engineered to tie into the control systems of ships and settlements, acting as biosensors and bio-controllers that can help them detect and react to things like high levels of radiation and control processes of other synthetic organisms.

That’s all blue–sky thinking for now, though. There are major challenges to overcome before any of these applications see the light of day, not least the fact that while they seem theoretically possible, we don’t yet have the tools to do this on Earth. Doing it in the harsh environment of space or currently uninhabitable planets will be even harder.

Extremophile microbes that survive in some of the world’s most inhospitable locations—like deep-sea thermal vents or under the arctic ice—could provide pointers for synthetic biologists trying to engineer hardier organisms. But getting these characteristics to seamlessly meld with abilities to produce desirable chemicals or carry out useful work is unlikely to be simple.

And no organism we know of so far is adapted for anything other than Earth gravity. Experiments on microbes sent into space show that the majority enter damage-control mode that shuts down non-essential systems, which would most likely include engineered pathways introduced by synthetic biologists. Understanding how varying levels of gravity impact microbes is also not easy to test, due to the huge cost of conducting experiments in space.

But with new technologies like CRISPR and methods for creating synthetic life forms quickly accelerating the field, there’s hope these challenges may soon be overcome. And that could be beneficial not just for early astronauts, but also those of us who stay behind.

Though the solutions won’t come about overnight, many of the space travel problems biologists are trying to solve with synthetic biology could also have transformative impacts on Earth, from enabling personalized medicine to sucking CO2 out of the atmosphere to zero-waste ways of living.