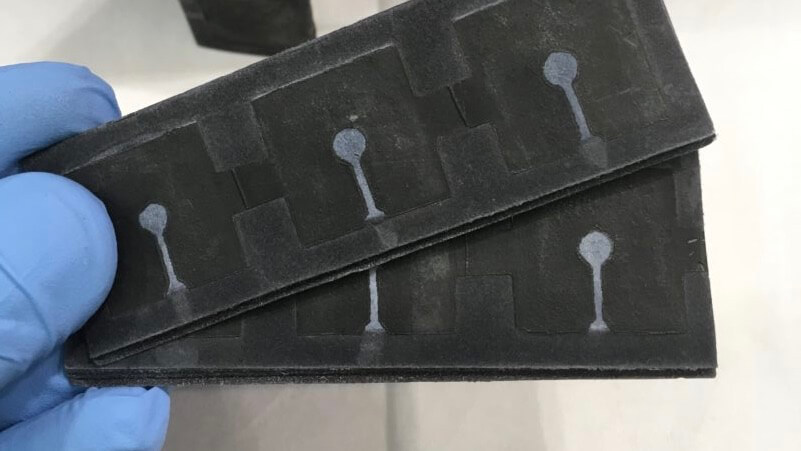 A team of scientists at the State University of New York has developed a paper-based, single-use battery that uses bacteria as a power source—all you need to add is water or even just a bit of spit.

The team presented their latest advances in a paper in Advanced Sustainable Systems, describing how the paper battery technology works:

“Poly (amic) acid and poly (pyromellitic dianhydride‐p‐phenylenediamine) are processed and incorporated into a porous, hydrophilic network of intertwined cellulose fibers to revolutionize oxygen‐blocking, proton‐exchanging, and biodegrading properties of the paper‐based microbial biobatteries, which ultimately offer the transformative potential of “green” electronics.”

Roughly translated, the battery involves plastering freeze-dried exoelectrogenic bacteria onto pieces of paper with thin layers of metals and other materials printed onto the paper’s surface. Exoelectrogens can transfer electrons outside of their cells. When said electrons pass through their cell membrane and touch anodes on the paper’s surface, they generate electricity.

The bacteria need to be reanimated to activate the battery, and the research team found that both water and saliva can do the job. The State University scientists say that once it is drained of energy, nature takes over and decomposes the battery.

“The biobattery clearly biodegrades without the requirements of special facilities, conditions, or introduction of other microorganisms,” they write.

The flexible, biodegradable paper batteries could see a multitude of uses. Especially in Internet of Things (IoT) devices, which currently (pun intended) face a power conundrum.

As IEEE reports, ‘more than 50 billion new electronic devices may be deployed during the next five years.’

Many will be IoT sensors and IoT equipment with a short lifetime—and all will require a power source. While lithium-ion batteries and supercapacitors could deliver power to many of the new devices, they rely on materials that are not biodegradable—and are sometimes outright toxic—leading to disposal/recycling issues.

Paper batteries could be used to power technology like industrial IoT sensors, as well as biosensors and similar medical equipment. As noted in The Engineer, medical paper-based sensors are often used in remote areas. However, without a power source, their results often lack the necessary accuracy.

While paper batteries produce relatively limited amounts of electricity, State University researcher Seokheun Choi described in a 2015 interview how the batteries can be folded or stacked to create higher output. The price per battery at the time: just five cents.

A Ways To Go

Choi recently presented an update on his team’s work at the 256th American Chemical Society meeting in Boston.

“The beauty of using paper as a device substrate is that you can simply stack or fold them for serial or parallel connection. […]I think that paper-based electronics can be regarded as a next-generation electronic platform, because it can combine deformability, cost-effectiveness and electronic waste management,’ he told attendees, according to Chemistryworld.

Choi’s team reported that the newest versions of the bacteria battery delivered a maximum power of 4 µW/cm2, which is ‘significantly higher’ than previous versions. IEEE reports that Choi believes their performance needs to be improved by a factor of around 1,000 to be commercially viable.

However, the team has previously stacked three of the paper batteries together to create a prototype that produced an output of 200µW, enough to power a pocket calculator for about 30 minutes.

The team is also working on improving the survival and performance rates of the freeze-dried bacteria. They are now capable of being stored for up to four months.

Other teams are also working on paper-based batteries. In 2017, a research team including Neus Sabaté, Juan Pablo Esquivel, and Erik Kjeang presented a paper in Advanced Energy Materials on their powerPAD, a cellulose-based single-use redox battery. Their research has been partially funded by the Bill and Melinda Gates Foundation.

So, the future of these revolutionary new batteries looks good. At least on paper.