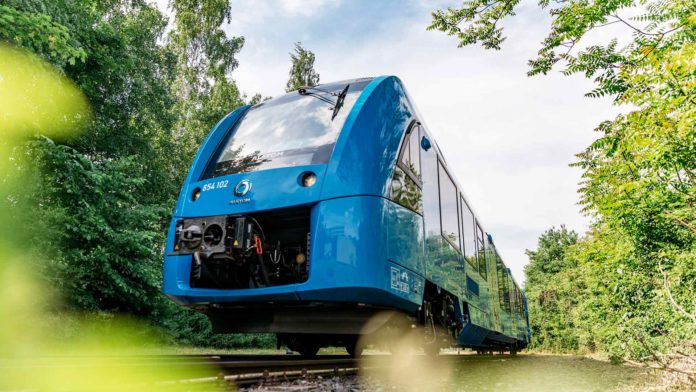 The advocates of hydrogen as the solution to replacing fossil fuels, particularly in transportation, have some compelling arguments. The fuel can be made with entirely renewable electricity, the internal combustion engine need not be abandoned, and the only waste product from burning it is water. Now, as Germany moves to replace the dirty diesel engines of its existing rolling stock, the world’s first hydrogen-powered commuter trains are on the rails.

In the spirit of European collaboration, the two trains are built by French TGV-maker Alstom, and will replace their diesel counterparts on the route between two towns in Lower Saxony, a round-trip distance of around 100 km (62 miles). Alstom and the local government of Lower Saxony are currently planning the delivery of another 14 of these trains by 2021.

“The world’s first hydrogen train is entering into commercial service and is ready for serial production,” Alstom CEO Henri Poupart-Lafarge said of the project.

While hydrogen is often touted as a clean fuel, it’s more accurate to describe it as a clean energy-storage technology. In the idealized vision of the clean hydrogen economy, the hydrogen itself is generated by the electrolysis of water. Hydrogen fuel cells, such as those used by Alstom’s train, can then combine the hydrogen with oxygen, “burning” it into water and steam as the waste products. These fuel cells allow the trains to hit a top speed of 140km/hr (87mph). Not the fastest trains around, but capable of keeping up with the average speed in the UK.

While the fuel burns clean, which is certainly good for local air quality, it is arguably only as green as the method of energy generation. Germany’s attempts to cut down its carbon emissions and meet its climate goals have been hampered by slow progress in the transport sector. Critics argue that the current method used to generate most hydrogen—via natural gas reforming—is far from clean, emitting CO2 as a byproduct.

Nevertheless, a carbon-neutral world will need a revolutionized transport system, and there is fierce competition between hydrogen fuel cells and lithium-ion batteries as the best mechanism of storing renewably-generated energy.

The Coradia iLint adopts a dual approach: while burning hydrogen from fuel cells is the dominant mechanism for propulsion, excess energy is stored in a back-up lithium-ion battery system.

Yet hydrogen still has a major advantage for transport: it can be refueled rapidly in much the same way as the existing diesel engines are.

A lithium ion-powered vehicle might spend half its life out of commission, recharging. Typically, electric trains avoid battery operation altogether and rely on cables for power, but this adds infrastructure costs and is difficult to sustain over very long distances. 40 percent of Germany’s rail network is still not electrified, which has until recently left it reliant on diesel engines.

These models can run for 1,000 km (about 600 miles) on a single hydrogen “charge”—enough to allow the trains to run throughout the day without needing to stop and refuel. The engines are also expected to be substantially quieter than their fossil fuel counterparts.

That improvement in range, along with the rapid refuelling time for hydrogen trains over battery-operated alternatives, puts them at a considerable advantage to battery-powered trains. Bombardier, which also took aim at replacing Germany’s diesel stock with something greener, tested a battery-powered train a few weeks ago, one of the first to operate in Europe for the last sixty years. Yet its range was limited to 40 km (25 miles). Even if the improved model is capable of its target, 100 km (62 miles), the necessity of recharging the train ten times as often means that hydrogen trains, for now, have a strong advantage.

Hydrogen fuel is also a considerable contender in the race for green aviation—and here it has a significant advantage over batteries. In aviation, the energy density of the fuel is crucial, and if the Department of Energy’s hydrogen storage targets are to be believed, the gravimetric energy density of stored hydrogen will exceed that of a Tesla battery by a factor of ten by 2020.

However, creating a hydrogen economy presents its own challenges in terms of storing and transporting the fuel. Hydrogen can be highly flammable and explosive. Given that the station in Bremervoerde will only host two hydrogen trains, the refuelling plan appears to involve a steel container, although a filling station is planned to go into operation in 2021 when the additional trains arrive.

“Buying a hydrogen train is somewhat more expensive than a diesel train, but it is cheaper to run,” Stefan Schrank, who managed the project from Alstom, noted. There is no definitive figure on how much the hydrogen trains cost, but the project to buy 14 trains received more than €81 million in support from the Lower Saxony government.

According to LVNG’s managing director, “We also do this because about 120 diesel trainsets in our vehicle pool will reach the end of their lifetime within the next 30 years, meaning we will have to replace them. The experience gained with this project helps us find a sustainable and practical solution.”