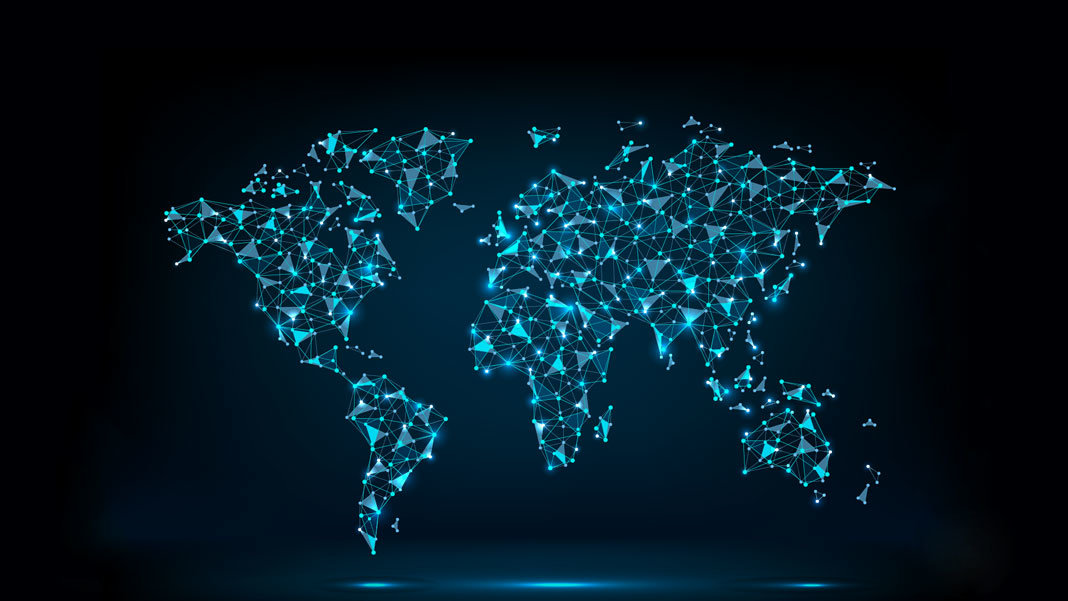 The boundaries between digital and physical space are disappearing at a breakneck pace. What was once static and boring is becoming dynamic and magical.

For all of human history, looking at the world through our eyes was the same experience for everyone. Beyond the bounds of an over-active imagination, what you see is the same as what I see.

But all of this is about to change. Over the next two to five years, the world around us is about to light up with layer upon layer of rich, fun, meaningful, engaging, and dynamic data. Data you can see and interact with.

This magical future ahead is called the Spatial Web and will transform every aspect of our lives, from retail and advertising, to work and education, to entertainment and social interaction.

Massive change is underway as a result of a series of converging technologies, from 5G global networks and ubiquitous artificial intelligence, to 30+ billion connected devices (known as the IoT), each of which will generate scores of real-world data every second, everywhere.

The current AI explosion will make everything smart, autonomous, and self-programming. Blockchain and cloud-enabled services will support a secure data layer, putting data back in the hands of users and allowing us to build complex rule-based infrastructure in tomorrow’s virtual worlds.

And with the rise of online-merge-offline (OMO) environments, two-dimensional screens will no longer serve as our exclusive portal to the web. Instead, virtual and augmented reality eyewear will allow us to interface with a digitally-mapped world, richly layered with visual data.

What is the Spatial Web?

While we humans exist in three dimensions, our web today is flat.

The web was designed for shared information, absorbed through a flat screen. But as proliferating sensors, ubiquitous AI, and interconnected networks blur the lines between our physical and online worlds, we need a spatial web to help us digitally map a three-dimensional world.

To put Web 3.0 in context, let’s take a trip down memory lane. In the late 1980s, the newly-birthed world wide web consisted of static web pages and one-way information—a monumental system of publishing and linking information unlike any unified data system before it. To connect, we had to dial up through unstable modems and struggle through insufferably slow connection speeds.

But emerging from this revolutionary (albeit non-interactive) infodump, Web 2.0 has connected the planet more in one decade than empires did in millennia.

But if Web 2.0 took the world by storm, the Spatial Web emerging today will leave it in the dust.

While there’s no clear consensus about its definition, the Spatial Web refers to a computing environment that exists in three-dimensional space—a twinning of real and virtual realities—enabled via billions of connected devices and accessed through the interfaces of virtual and augmented reality.

In this way, the Spatial Web will enable us to both build a twin of our physical reality in the virtual realm and bring the digital into our real environments.

It’s the next era of web-like technologies:

Geared with natural language search, data mining, machine learning, and AI recommendation agents, the Spatial Web is a growing expanse of services and information, navigable with the use of ever-more-sophisticated AI assistants and revolutionary new interfaces.

Where Web 1.0 consisted of static documents and read-only data, Web 2.0 introduced multimedia content, interactive web applications, and social media on two-dimensional screens. But converging technologies are quickly transcending the laptop, and will even disrupt the smartphone in the next decade.

With the rise of wearables, smart glasses, AR / VR interfaces, and the IoT, the Spatial Web will integrate seamlessly into our physical environment, overlaying every conversation, every road, every object, conference room, and classroom with intuitively-presented data and AI-aided interaction.

Think: the Oasis in Ready Player One, where anyone can create digital personas, build and invest in smart assets, do business, complete effortless peer-to-peer transactions, and collect real estate in a virtual world.

Or imagine a virtual replica or “digital twin” of your office, each conference room authenticated on the blockchain, requiring a cryptographic key for entry.

As I’ve discussed with my good friend and “VR guru” Philip Rosedale, I’m absolutely clear that in the not-too-distant future, every physical element of every building in the world is going to be fully digitized, existing as a virtual incarnation or even as N number of these. “Meet me at the top of the Empire State Building?” “Sure, which one?”

This digitization of life means that suddenly every piece of information can become spatial, every environment can be smarter by virtue of AI, and every data point about me and my assets—both virtual and physical—can be reliably stored, secured, enhanced, and monetized.

In essence, the Spatial Web lets us interface with digitally-enhanced versions of our physical environment and build out entirely fictional virtual worlds—capable of running simulations, supporting entire economies, and even birthing new political systems.

But while I’ll get into the weeds of different use cases next week, let’s first concretize.

Let’s start with the stack. In the PC days, we had a database accompanied by a program that could ingest that data and present it to us as digestible information on a screen.

Then, in the early days of the web, data migrated to servers. Information was fed through a website, with which you would interface via a browser—whether Mosaic or Mozilla.

And then came the cloud.

Resident at either the edge of the cloud or on your phone, today’s rapidly proliferating apps now allow us to interact with previously read-only data, interfacing through a smartphone. But as Siri and Alexa have brought us verbal interfaces, AI-geared phone cameras can now determine your identity, and sensors are beginning to read our gestures.

And now we’re not only looking at our screens but through them, as the convergence of AI and AR begins to digitally populate our physical worlds.

While Pokémon Go sent millions of mobile game-players on virtual treasure hunts, IKEA is just one of the many companies letting you map virtual furniture within your physical home—simulating everything from cabinets to entire kitchens. No longer the one-sided recipients, we’re beginning to see through sensors, creatively inserting digital content in our everyday environments.

Let’s take a look at how the latest incarnation might work. In this new Web 3.0 stack, my personal AI would act as an intermediary, accessing public or privately-authorized data through the blockchain on my behalf, and then feed it through an interface layer composed of everything from my VR headset, to numerous wearables, to my smart environment (IoT-connected devices or even in-home robots).

But as we attempt to build a smart world with smart infrastructure, smart supply chains and smart everything else, we need a set of basic standards with addresses for people, places, and things. Just like our web today relies on the Internet Protocol (TCP/IP) and other infrastructure, by which your computer is addressed and data packets are transferred, we need infrastructure for the Spatial Web.

And a select group of players is already stepping in to fill this void. Proposing new structural designs for Web 3.0, some are attempting to evolve today’s web model from text-based web pages in 2D to three-dimensional AR and VR web experiences located in both digitally-mapped physical worlds and newly-created virtual ones.

With a spatial programming language analogous to HTML, imagine building a linkable address for any physical or virtual space, granting it a format that then makes it interchangeable and interoperable with all other spaces.

But it doesn’t stop there.

As soon as we populate a virtual room with content, we then need to encode who sees it, who can buy it, who can move it…

And the Spatial Web’s eventual governing system (for posting content on a centralized grid) would allow us to address everything from the room you’re sitting in, to the chair on the other side of the table, to the building across the street.

Just as we have a DNS for the web and the purchasing of web domains, once we give addresses to spaces (akin to granting URLs), we then have the ability to identify and visit addressable locations, physical objects, individuals, or pieces of digital content in cyberspace.

And these not only apply to virtual worlds, but to the real world itself. As new mapping technologies emerge, we can now map rooms, objects, and large-scale environments into virtual space with increasing accuracy.

We might then dictate who gets to move your coffee mug in a virtual conference room, or when a team gets to use the room itself. Rules and permissions would be set in the grid, decentralized governance systems, or in the application layer.

Taken one step further, imagine then monetizing smart spaces and smart assets. If you have booked the virtual conference room, perhaps you’ll let me pay you 0.25 BTC to let me use it instead?

But given the Spatial Web’s enormous technological complexity, what’s allowing it to emerge now?

Why Is It Happening Now?

The International Data Corporation (IDC) predicts the VR and AR headset market will reach 65.9 million units by 2022. Already in the next 18 months, 2 billion devices will be enabled with AR. And tech giants across the board have long begun investing heavy sums.

In early 2019, HTC is releasing the VIVE Focus, a wireless self-contained VR headset. At the same time, Facebook is charging ahead with its Project Santa Cruz—the Oculus division’s next-generation standalone, wireless VR headset. And Magic Leap has finally rolled out its long-awaited Magic Leap One mixed reality headset.

And with such democratizing speeds, every user will be able to develop in VR.

But accompanying these two catalysts is also an important shift towards the decentralized web and a demand for user-controlled data.

Converging technologies, from immutable ledgers and blockchain to machine learning, are now enabling the more direct, decentralized use of web applications and creation of user content. With no central point of control, middlemen are removed from the equation and anyone can create an address, independently interacting with the network.

Enabled by a permission-less blockchain, any user—regardless of birthplace, gender, ethnicity, wealth, or citizenship—would thus be able to establish digital assets and transfer them seamlessly, granting us a more democratized Internet.

And with data stored on distributed nodes, this also means no single point of failure. One could have multiple backups, accessible only with digital authorization, leaving users immune to any single server failure.

With a newly-built stack and an interface built from numerous converging technologies, the Spatial Web will transform every facet of our everyday lives—from the way we organize and access our data, to our social and business interactions, to the way we train employees and educate our children.

We’re about to start spending more time in the virtual world than ever before. Beyond entertainment or gameplay, our livelihoods, work, and even personal decisions are already becoming mediated by a web electrified with AI and newly-emerging interfaces.

In our next blog on the Spatial Web, I’ll do a deep dive into the myriad industry implications of Web 3.0, offering tangible use cases across sectors.