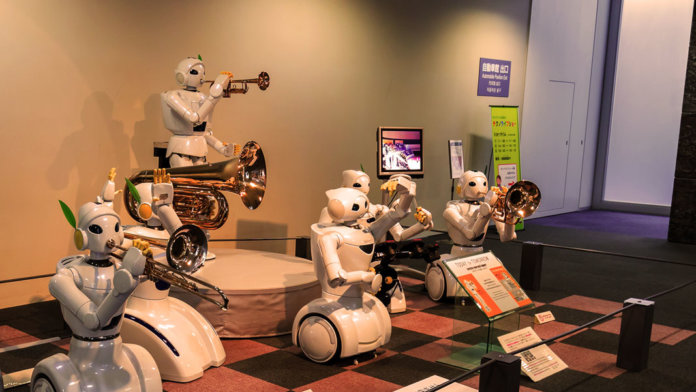 Every year, for just a few days in a major city, a small team of roboticists get to live the dream: ordering around their own personal robot butlers. In carefully-constructed replicas of a restaurant scene or a domestic setting, these robots perform any number of simple algorithmic tasks. “Get the can of beans from the shelf. Greet the visitors to the museum. Help the humans with their shopping. Serve the customers at the restaurant.”

This is Robocup @ Home, the annual tournament where teams of roboticists put their autonomous service robots to the test for practical domestic applications. The tasks seem simple and mundane, but considering the technology required reveals that they’re really not.

Say you want a robot to fetch items in the supermarket. In a crowded, noisy environment, the robot must understand your commands, ask for clarification, and map out and navigate an unfamiliar environment, avoiding obstacles and people as it does so. Then it must recognize the product you requested, perhaps in a cluttered environment, perhaps in an unfamiliar orientation. It has to grasp that product appropriately—recall that there are entire multi-million-dollar competitions just dedicated to developing robots that can grasp a range of objects—and then return it to you.

It’s a job so simple that a child could do it—and so complex that teams of smart roboticists can spend weeks programming and engineering, and still end up struggling to complete simplified versions of this task. Of course, the child has the advantage of millions of years of evolutionary research and development, while the first robots that could even begin these tasks were only developed in the 1970s.

Even bearing this in mind, Robocup @ Home can feel like a place where futurist expectations come crashing into technologist reality. You dream of a smooth-voiced, sardonic JARVIS who’s already made your favorite dinner when you come home late from work; you end up shouting “remember the biscuits” at a baffled, ungainly droid in aisle five.

Caring for the Elderly

Famously, Japan is one of the most robo-enthusiastic nations in the world; they are the nation that stunned us all with ASIMO in 2000, and several studies have been conducted into the phenomenon. It’s no surprise, then, that humanoid robotics should be seriously considered as a solution to the crisis of the aging population. The Japanese government, as part of its robots strategy, has already invested $44 million in their development.

Toyota’s Human Support Robot (HSR-2) is a simple but programmable robot with a single arm; it can be remote-controlled to pick up objects and can monitor patients. HSR-2 has become the default robot for use in Robocup @ Home tournaments, at least in tasks that involve manipulating objects.

Alongside this, Toyota is working on exoskeletons to assist people in walking after strokes. It may surprise you to learn that nurses suffer back injuries more than any other occupation, at roughly three times the rate of construction workers, due to the day-to-day work of lifting patients. Toyota has a Care Assist robot/exoskeleton designed to fix precisely this problem by helping care workers with the heavy lifting.

The Home of the Future

The enthusiasm for domestic robotics is easy to understand and, in fact, many startups already sell robots marketed as domestic helpers in some form or another. In general, though, they skirt the immensely complicated task of building a fully capable humanoid robot—a task that even Google’s skunk-works department gave up on, at least until recently.

It’s plain to see why: far more research and development is needed before these domestic robots could be used reliably and at a reasonable price. Consumers with expectations inflated by years of science fiction saturation might find themselves frustrated as the robots fail to perform basic tasks.

Instead, domestic robotics efforts fall into one of two categories. There are robots specialized to perform a domestic task, like iRobot’s Roomba, which stuck to vacuuming and became the most successful domestic robot of all time by far.

The tasks need not necessarily be simple, either: the impressive but expensive automated kitchen uses the world’s most dexterous hands to cook meals, providing it can recognize the ingredients. Other robots focus on human-robot interaction, like Jibo: they essentially package the abilities of a voice assistant like Siri, Cortana, or Alexa to respond to simple questions and perform online tasks in a friendly, dynamic robot exterior.

In this way, the future of domestic automation starts to look a lot more like smart homes than a robot or domestic servant. General robotics is difficult in the same way that general artificial intelligence is difficult; competing with humans, the great all-rounders, is a challenge. Getting superhuman performance at a more specific task, however, is feasible and won’t cost the earth.

Individual startups without the financial might of a Google or an Amazon can develop specialized robots, like Seven Dreamers’ laundry robot, and hope that one day it will form part of a network of autonomous robots that each have a role to play in the household.

The Smart Home has been a staple of futurist expectations for a long time, to the extent that movies featuring smart homes out of control are already a cliché. But critics of the smart home idea—and of the internet of things more generally—tend to focus on the idea that, more often than not, software just adds an additional layer of things that can break (NSFW), in exchange for minimal added convenience. A toaster that can short-circuit is bad enough, but a toaster that can refuse to serve you toast because its firmware is updating is something else entirely.

That’s before you even get into the security vulnerabilities, which are all the more important when devices are installed in your home and capable of interacting with them. The idea of a smart watch that lets you keep an eye on your children might sound like something a security-conscious parent would like: a smart watch that can be hacked to track children, listen in on their surroundings, and even fool them into thinking a call is coming from their parents is the stuff of nightmares.

Key to many of these problems is the lack of standardization for security protocols, and even the products themselves. The idea of dozens of startups each developing a highly-specialized piece of robotics to perform a single domestic task sounds great in theory, until you realize the potential hazards and pitfalls of getting dozens of incompatible devices to work together on the same system.

It seems inevitable that there are yet more layers of domestic drudgery that can be automated away, decades after the first generation of time-saving domestic devices like the dishwasher and vacuum cleaner became mainstream. With projected market values into the billions and trillions of dollars, there is no shortage of industry interest in ironing out these kinks. But, for now at least, the answer to the question: “Where’s my robot butler?” is that it is gradually, painstakingly learning how to sort through groceries.