Whale-Watching from Space: Why Satellites Are Monitoring Wildlife 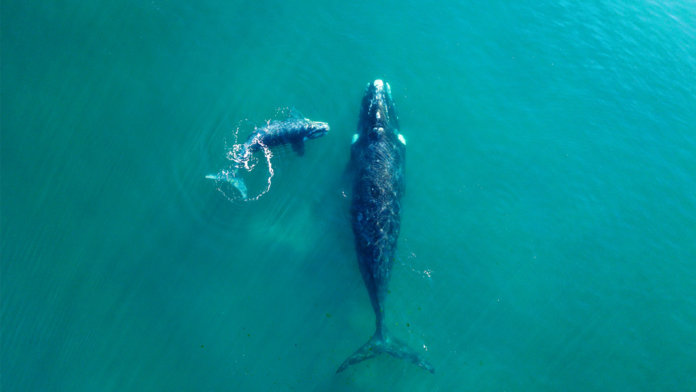 A new study of whales shows that advances in satellite imagery and related technologies mean we can now recognize specific features of animals all the way from space. It is the latest in a growing number of projects to give us new, detailed knowledge of the state of Earth’s wildlife and thereby our planet’s condition. Some of said projects rely on the efforts of the general public, who have been able to participate from the comfort of their homes.

Scientists from the University of Cambridge and the British Antarctic Survey used high-resolution satellite images to detect and count four species of whales. The images were produced by WorldView-3, a satellite from geospatial information company DigitalGlobe capable of detailing objects at the earth’s surface down to a size of about a foot (31 centimeters) across.

“Satellites have improved so much with their spatial resolution. For the first time we’ve been able to see features that are truly distinctive of whales, such as their flippers and flukes,” lead author Hannah Cubaynes, a whale ecologist, told the BBC.

In their paper, the research team describes how they searched known whale aggregation areas off the coasts of Argentina, Hawaii, Mexico, and in the Mediterranean Sea, covering a combined 5,000 square kilometers; an area roughly the size of the state of Delaware. The team focused on identifying and counting southern right, humpback, fin, and grey whales.

The researchers went through high-resolution satellite images and identified the ones possibly containing whales. They then blended black and white and color satellite images and carried out additional automated analysis. The process made it possible to identify and count the different species, adding important data to assessments of whale populations, distribution, and health status.

Whales are the largest species on Earth. The four species in the project grow to a maximum length of 15 to 20 meters (around 50 to 65 feet). However, scientists are using satellites to count and catalog much smaller animals.

One study has counted albatross nests on the inhospitable, hard-to-reach islands the birds use as breeding grounds. The International Union for Conservation of Nature lists nine species of albatross as either critically endangered or endangered. The satellite study provides new information on the number of breeding pairs of albatrosses, providing key insights into the danger of extinction.

Seth Stapleton, a postdoctoral researcher at the University of Minnesota in St. Paul, has used satellite images to track the distribution and numbers of polar bears. Even though polar bears are widely studied, their remote, cold hunting grounds and roaming nature means that we know relatively little about their whereabouts and movement across much of the Arctic. On the opposite pole, scientists estimated the size of emperor penguin colonies through a combination of medium and high-resolution satellite imagery.

Weddell seals also call Antarctica home, making it difficult to count them. This problem made Dr. Michelle LaRue, an ecologist at the University of Minnesota, turn to the crowdsourcing platform Tomnod. The site asks its users to analyze satellite images, and since 2016 volunteers have scoured images of thousands upon thousands of square miles of Antarctica’s coastal ice, looking for seals.

“Quite literally, there’s no way this could’ve been done any other way, especially in that amount of time,” LaRue told Earther.

The State of Our World

The common factor of all the studies mentioned above is how satellite images provide the possibility of counting species in environments that are both vast and often hard to reach. The insights the investigations led to give us updated, actionable information about both the state of the individual species and their ecosystem.

As Dr. Jennifer Jackson, a whale expert with the British Antarctic Survey, told the BBC:

“Whales are a really important indicator of ecosystem health. By being able to gather information on the grandest scales afforded by satellite imagery, we can understand something more generally about the oceans’ health and that’s really important for marine conservation.”

At the same time, satellite images provide a cheaper alternative to on-site observations. For example, counting whales in the four locations would otherwise have to involve expensive boats and planes. Satellites are also less affected by changing weather conditions and political instabilities, and they avoid the Schrodinger-like Catch-22 that often dogs conservation efforts: how to get insights into the state of a species without disturbing the animals.

Animal behavior and their numbers also provide valuable insights into the more general state of our planet. For example, Weddell seals are known to prefer to stay on the ‘fast ice,’ which regulates the flow of ice shelves and glaciers into the ocean. If we can follow the movements of Weddell seals, it provides a new data source that can give indications of changes to the fast ice.

Furthermore, watching animals’ movements by satellite could, in time, even become an early warning system for natural disasters. For example, goats and elephants seem to react in specific ways ahead of impending geological disasters, like volcanic eruptions and earthquakes.