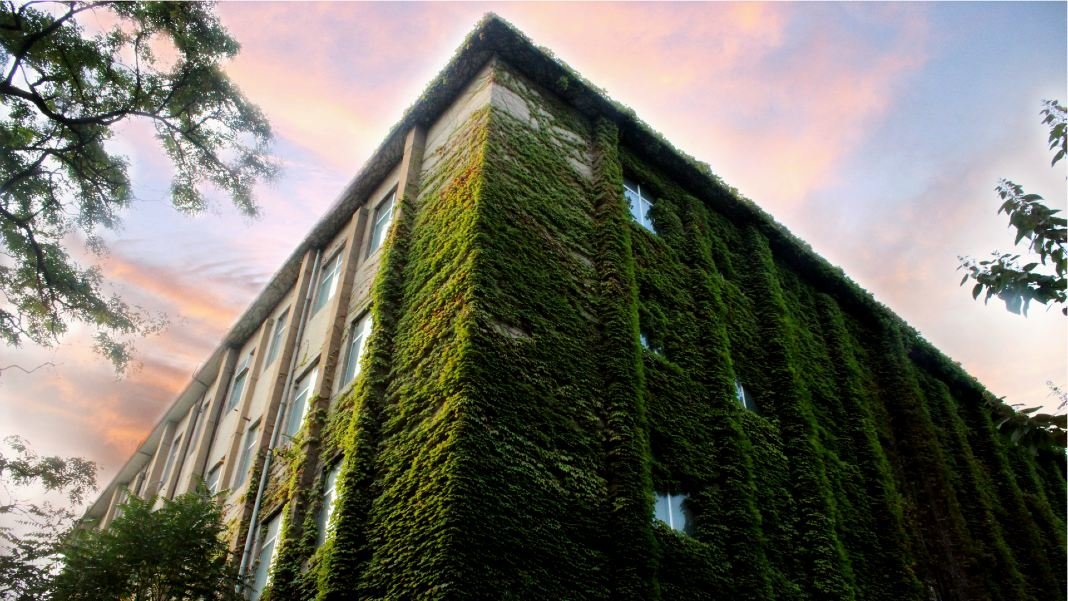 The varied universes of science fiction often offer inspiration for emerging technologies, or at least fitting leads for articles to describe them. Take the spaceship Moya from a sci-fi series called “Farscape,” which follows the adventures of a ragtag team of aliens very much in the spirit of “Guardians of the Galaxy.”

Moya is a biomechanical ship, part of an alien race called Leviathans that’s been described as a cross between a stingray and a horseshoe crab. She comes equipped with her own version of the warp drive and repair drones, but is also capable of producing offspring, giving a whole new meaning to the term “mothership.”

This hybrid of biology and technology is a fantastical spin on real-world concepts that come with labels like organicism, biotecture, or living architecture. The basic idea of these theories is simple: Integrating biological systems into our living spaces, whether it’s the home, the office, or the first rocket carrying humans to Mars, is imperative for creating more sustainable and healthier environments.

“To develop a more sustainable relationship with the natural world, we need to allow chemical exchanges that take place within our living spaces, and between the inside and the outside,” wrote Dr. Rachel Armstrong, a professor of experimental architecture at Newcastle University who also holds a medical degree.

“Today’s building ‘envelopes’ seal off our living and working spaces to a degree previously unencountered. In many offices, it is no longer possible to open windows manually to let in a breeze,” she noted. “Such buildings ignore the metabolism that is the dynamic scaffolding of living systems.”

Armstrong isn’t just talking about placing a few more houseplants around the office. Her concepts go beyond even adding green roofs to our cityscape or living walls into our apartments, though such biological structures can potentially cool down the heat island effect or help purify air and buffer sound indoors.

Instead, Armstrong is advocating for installing complex biological systems that can recycle wastewater and generate electricity, among other services, into our living spaces. This year marks the culmination of the three-year Living Architecture (LIAR) project, which aims to demonstrate how bathrooms, kitchens, and commercial spaces can be transformed into environmentally sensitive sites, according to Armstrong.

“Wall sections in the rooms are replaced with bioreactors, self-contained microbial systems,” she explained in a piece written for Fast Company. “One type of bioreactor is a fuel cell that houses anaerobic bacteria to produce electricity and clean water. Another is an algae photobioreactor that produces biomass for fuel or food. The third type is a synthetic bioreactor that can make alcohol or other plant-based materials.”

It’s a bit like having a water boiler in your home, except it doesn’t rely on electricity likely generated from a coal plant or natural gas, but on the metabolism of living things.

Building Toward a More Sustainable Architecture

The LIAR project is one of the latest iterations of breaking down the barriers humans have been building around ourselves since the time of Gilgamesh, a Sumerian king in Mesopotamia who lived some 4,500 years ago and founded the world’s first major city.

We don’t have to go nearly that far back in time to find the roots of living architecture. Armstrong herself has noted that in the 1970s—the same decade that gave us Earth Day, the Clean Air and Water Acts, and the Endangered Species Act—a group of ecologists founded the New Alchemy Institute.

Even more recently, the BIQ (Bio-Intelligent Quotient) House was built in Hamburg, Germany. It’s an apartment building that’s been described as the world’s first algae-powered structure. The two sides of the building that face the sun have an outer shell where microalgae grow within translucent tanks. Sunlight and carbon dioxide combine to produce enough biomass to generate electricity. Solar energy not used by the microalgae is collected and used for hot water and heating.

Another Brick in the Bio Wall

Startups are getting into the act with developing new biomaterials.

There’s a North Carolina company called BioMasons, founded in 2012, that uses microorganisms to “grow” bricks without the need for high-heat blasting that releases tons of carbon dioxide into the atmosphere. Instead, the company mixes sand with the microorganisms, which harden the material in a process similar to building coral reefs.

A New York startup that has raised more than $20 million, Ecovative Designs is one of several private companies developing one of the most promising biomaterials today: mycelium. Mycelium is the root structure of mushrooms, and they have some amazing properties, including being as strong pound for pound as concrete.

Designers can grow complex shapes and structures for applications as diverse as biodegradable packaging and resilient foam for footwear. And that’s not all.

The earlier reference to Farscape wasn’t as far-fetched as it sounded. NASA and private organizations alike are putting together designs for biological habitats to nurture and protect humans far from Earth.

One such endeavor is called Project Persephone, which is part of a larger nonprofit organization called Icarus Interstellar that aims for humans to reach beyond the solar system by 2100.

Armstrong is also involved in this adventure, having edited a book of essays called Star Ark: A Living, Self-Sustaining Spaceship, a sort of speculative non-fiction that explores what sort of shipboard ecosystem would be required for colonists to survive such a long and dangerous journey.

NASA is already designing biological-based habitats for destinations like Mars with the same sort of biomaterial being developed by Ecovative and others. Lynn J. Rothschild, a senior researcher at NASA, is leading a team developing a myco-architecture that envelops a plastic-shell habitat.

Mycelial spores are fed a dried feedstock (from mission-produced organic waste), and when water and heat are applied, the spores get to work. It’s better than any Smurf-built mushroom house: Myco structures are not only good insulators and fire retardant, but mycelium from melanin-rich fungi can potentially absorb radiation. Radiation exposure is one of the big show-stoppers for a long-term human presence in space.

The trend today is to make everything smarter—our homes, our offices, and even our cars. But a growing number of architects, scientists, and artists are recognizing that creating civilization 4.0 must involve more than mere gadgetry. A truly sustainable and healthy living environment should function more like an ecosystem. A city must breathe, literally.

The seed is planted. Let’s see if it grows.