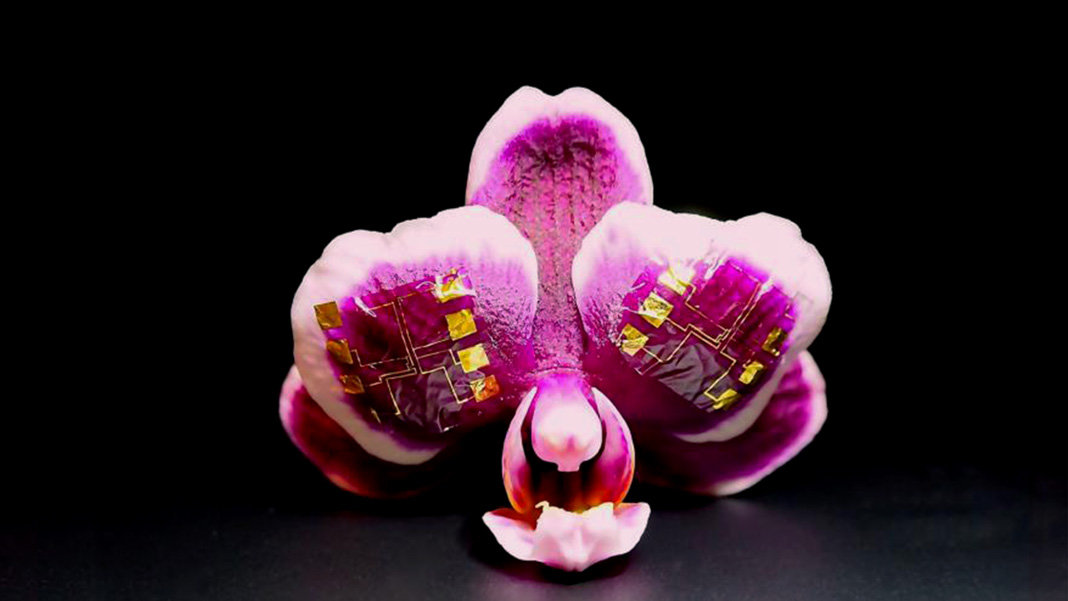 At least not optimally. As scientists and companies are increasingly exploring ways to interface your brain with computers, fashioning new hardware that conforms to and compliments our biological wetware becomes increasingly important.

To be fair, silicon transistors, when made into electrode arrays, can perform the basics: record neural signals, process and analyze them with increasingly sophisticated programs that detect patterns, which in turn can be used to stimulate the brain or control smart prosthetics.

The problem? They’re not biocompatible in the long term. Without modification, implanted electrodes invariably activate the brain’s immune system, resulting in scar tissue around the implantation site as the cells eagerly attack the foreign invader.

The trick is to encase them in plastics that the body tolerates. But if you’ve tried squeezing a sleeve-protective laptop into a small bag, you’ll know that increasing bulk stretches out the bag (my struggle everyday). In the case of brain-machine interfacing electronics, brain tissue is the bag.

To Dr. Dion Khodagholy at Columbia University, the cure isn’t making smaller transistors—we’ve almost hit the limit. Rather, it’s to fabricate entirely new transistors that comfortably interface with human tissue, brain or otherwise. This month, the team described a soft, flexible, and biocompatible transistor that operates on ions, rather than electrons in traditional transistors, in Science Advances.

Because neurons rely on ions for their communication, the new transistors are far more efficient at processing body signals in real time compared to current generation electronics. In a series of tests, the team was able to string multiple transistors together to amplify signals and form logic gates, similar to those used in silicon-based computing.

The devices, made of flexible, biocompatible materials through microfabrication, allowed the team to accurately measure EEG “brain wave” signals without requiring additional adhesives, and lowered the contact space between gadget and scalp by five times compared to the usual setup. If that doesn’t seem particularly impressive, the team has only just begun exploring the potential of their ion-drive transistors.

“Our transistor…makes communication with neural signals of the body more efficient. We’ll now be able to build safer, smaller, and smarter bioelectronic devices, such as brain-machine interfaces, wearable electronics, and responsive therapeutic stimulation devices, that can be implanted in humans over long periods of time,” said Khodagholy.

How Do Transistors Work Anyways?

By making novel transistors, Khodagholy’s team is digging into the very basics of computation—brain or otherwise.

In a nutshell, a transistor is a mini electrical component that does two things very well: one, it works as an amplifier to boost input current, which is what hearing aids or microphones rely on. Two, it works as a switch, allowing a small current to trigger a larger one—this is how computer chips work, with their billions of transistors that can store 0s and 1s and each operating individually.

Silicon transistors, even fancy ones modified for biocompatibility, require ion-to-electron conversion during operation. They act as translators to turn the body’s operating language (ions, a type of charged particle) to one that computers use. Most of them are susceptible to water damage and need to be sequestered inside a protective casing, which introduces bulk and decreases performance.

Scientists have been able to minimize some of those issues with organic electrochemical transistors, which rely on biocompatible molecules linked to each other to form a “channel” that allows signals to flow through with the help of external electrolytes—liquids that conduct electricity. These transistors, however, can’t be individually controlled, making it impossible to build logic gates and circuits, and they’re painfully slow compared to the brain’s operations.

To Khodagholy, an ideal transistor for the brain needs four things: one, it’s built from biocompatible and stable materials; two, it’s soft and flexible to avoid mechanical mismatches with the brain; three, it needs high speed and efficient amplification mechanisms that can tease out and boost useful brain chattering from background noise; and finally, it has to have independent gating, in the sense that each transistor can be controlled separately, which allows them to be linked up into integrated circuits.

The team’s answer to bio-transistors is the IGT.

In a nutshell, IGTs are built from biocompatible material similar to those previously used. However, they have mobile ions directly embedded into the conducting material that makes up the transistor channel. In this way, they no longer rely on external electrolytes, but are themselves the full package for conducting information.

“Sugar molecules attract water molecules and not only help the transistor channel to stay hydrated, but also help the ions travel more easily and quickly within the channel,” Khodagholy explained.

Because the mobile ions are directly in the transistor channels, they don’t have to travel far to modulate the transistor compared to external electrolytes—the typical solution. This makes the IGT respond orders of magnitude faster than electrolyte-gated transistors to changes in external signaling, said study author Dr. George D. Spyropoulos.

Sticking sugar, which provides an ion reservoir, directly into the transistor had another perk: it allowed each transistor to be made independent. Rather than bathing in and sharing external electrolytes, IGTs have the capacity to have their own gates—that is, a membrane that controls whether they’re on or off. In one experiment, the team microfabricated two separate logic gates and confirmed that each operated accurately, performing their intended arithmetic.

This confirms “the scalability of IGT architecture for use as bioelectronics computational modules,” they said.

In another study, the team found that the devices could reliably amplify tiny signals by as much as four-fold. Because neural and other body signals often require multi-stage boosting before they’re accurately picked up and deciphered, IGTs seem perfectly suited for the job.

As a proof of concept of IGT’s biocompatibility, the team turned its focus on EEG. Widely used in clinics and labs, EEG picks up brain waves using a cap of electrodes on the surface of the scalp.

It’s not a fun process: the scalp often has to be exfoliated (ouch!) and an adhesive is used to better stick on the metal electrodes, which causes irritation at best and rashes at worst. Hair also gets in the way and muddies signals.

IGT, in contrast, is a dream. Its small size meant that the team could slip it between hair follicles. Its flexibility and bendiness made it possible to slap it straight onto the scalp—no pretreatments required. In a test that measures brain signals when people are awake with their eyes closed, IGTs reliably and consistently picked up the brain’s activity.

A portable, lightweight EEG device that can be manipulated by hand could already change the future of neurology. But that’s just the beginning. The tiny size of IGTs means it will be possible to apply more devices to smaller areas to measure signals at a finer scale, or stick them into areas normally too small or irregular to accommodate electrodes. Because they’re intrinsically soft, conformable, and biocompatible, they can be used on extremely delicate tissue, such as a newborn’s scalp or inside the brain.

But most importantly, said study author Dr. Jennifer Gelinas, IGTs can perform circuit computations. This means they could one day be part of a closed-loop system capable of detecting the brain’s electrical patterns and stimulate accordingly, with far less risk than current electrode-based interfaces.

“With such speed and amplification, combined with their ease of microfabrication, these transistors could be applied to many different types of devices. There is great potential for the use of these devices to benefit patient care in the future,” said Khodagholy.