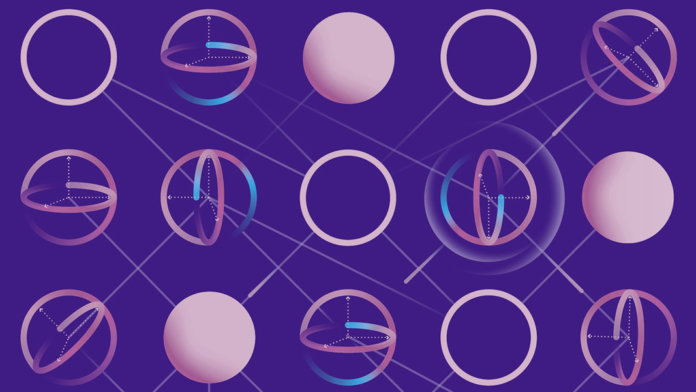 Quantum supremacy sounds like something out of a Marvel movie. But for scientists working at the forefront of quantum computing, the hope—and hype—of this fundamentally different method of processing information is very real. Thanks to the quirky properties of quantum mechanics (here’s a nifty primer), quantum computers have the potential to massively speed up certain types of problems, particularly those that simulate nature.

Scientists are especially enthralled with the idea of marrying the quantum world with machine learning. Despite all their achievements, our silicon learning buddies remain handicapped: machine learning algorithms and traditional CPUs don’t play well, partly because the greedy algorithms tax classical computing hardware.

Add in a dose of quantum computing, however, and machine learning could potentially process complex problems beyond current abilities at a fraction of the time.

Thanks to a new study by IBM and MIT, we just had some first experimental proof that theory may become reality. Published in Nature, the collaboration used a two-qubit quantum computing system to show that quantum computers can bolster a specific type of machine learning—one generally used for classification—using a lab-generated dataset.

Without doubt, it’s only a first step. But the study clearly shows that perfect quantum computers, currently beyond reach, aren’t necessary to help our AI. As noisy as they are, the quantum systems already available fit the bill—particularly those that can synergize with classical computers to perform machine learning as a team.

“Altogether, I think this line of research will see a lot more papers following and there is a huge potential,” said Dr. Maria Schuld at Xanadu to Singularity Hub, who was not involved in the study. Last month, Schuld described remarkably similar ideas and has now provided a commentary accompanying the new paper.

“We are still far off from achieving quantum advantage for machine learning,” noted the team in a blog post. “Yet the…methods we’re advancing could soon be able to classify far more complex data sets than anything a classical computer could handle. What we’ve shown is a promising path forward.”

The study starts with an unexpected insight: that a certain type of machine learning, relying on “kernel methods,” is mathematically extraordinarily similar to what goes on inside a quantum computer.

A classical example of these algorithms is the Support Vector Machine (SVM), which soared to popularity back in the 90s before giving way to deep learning. In a nutshell, for problems that discriminate between different things—cats versus dogs, for example—SVMs are relatively powerful when the features describing each class are rather simple.

Here’s where things get wacky. Basically, SVMs rely on kernel methods to “project” input data using a clearly defined mathematical way into high-dimensional space to separate features with hyperplanes (yeah, that originally sounded like nonsense to me too).

It helps to use a simplified analogy in our familiar 3D world. Picture drawing a cat and overlaying a dog sticker on top of a piece of paper. Because the paper only has one surface, there’s absolutely no way of drawing a line or a plane to separate the cat and dog.

Now add another dimension, depth. You suddenly realize that the two items are actually eclipsed, inhabiting different depths. By projecting the cat and dog into a higher-dimensional space, it’s now possible to slide a paper (a “plane”) between the two to separate them into distinct classes.

Very simply, this is how SVMs work. Computers take an image of a cat or dog, reorganize the pixels according to color, shape, or some other characteristic unfamiliar to our human minds, and “project” that input into an abstract high-dimensional space. This is called a “feature map,” which the computer then uses to build a kernel—a way to best separate out the features to aid classification.

SVMs generally aren’t the deep learning methods all over the news these days. Although there’s been attempts at bridging (extremely) simple neural nets with quantum computing, the two aren’t a great fit.

“Basically, the mathematical theory of kernel methods and quantum mechanics has a lot of similarities, while the theories of quantum theory and neural networks are very unlike,” explained Schuld.

This insight—amazingly almost simultaneously explored by both Schuld and the IBM team—is key.

One idea is to use the quantum computer itself as the “discriminator.” Training data are mapped into a quantum state, kind of analogous to turning color images into 0s and 1s. In this case, the output is a bunch of quantum particles in superposition. These data are then fed into a short-depth quantum circuit, which can mostly maintain quantum properties until the end of the calculation. Think of it as a laptop that’s generally reliable and doesn’t often crash, rather than a perfect machine.

“Our quantum variational approach uses a (possibly random) starting set of parameters that are then optimized…during training. In that sense it is possible to perceive such an analogy, since neural networks also use parameterized quantities (weights) and start from a random state,” he explained.

Because of their quantum properties, particles that drive a quantum computer abstractly inhabit a really large “quantum state,” full of possibilities. In theory, this makes separating out the features far easier and faster than a traditional computer.

“To obtain quantum advantage, it is crucial that the circuits are of a form that one cannot efficiently simulate them classically [in a silicon computer],” said Temme.

Another idea is to use the quantum computer for figuring out the kernel: that is, how to best map all that input data into high-dimensional space to help separate features in a meaningful way. Here, the classic silicon-based computer does the rest—using the kernel (of insight) from its quantum companion, it learns the rule that says “these things make it a cat” or “dog.”

In a two-bit quantum computing system, the team tested out the two strategies with a man-made dataset—a “toy” problem.

“We wanted to see if we can implement a machine learning classifier inside quantum hardware,” explained the team. That’s why the data is man-made in a way that it can be classified with 100 percent success to verify the method.

Even with the inherent noise from current generation quantum computers, the team was able to achieve near-perfect classification (you can play with the demo here).

This is key, said Schuld. “Despite the inflated claims of some news reports, anyone who has tried quantum computing in the cloud knows that collecting meaningful data from these devices is notoriously difficult, owing to the high levels of experimental noise in the computation,” she said.

The team’s results, showing that it’s possible to classify their data even in the presence of noise, is really good news for people itching to bridge quantum computing with machine learning.

“This approach to quantum machine learning provides us with a path to understanding in which way even noisy, intermediate-scale quantum computers can outperform classical machine learning algorithms,” said Dr. Jerry Chow, Manager of Experimental Quantum Computing at IBM Research to Singularity Hub.

Tanisha Bassan, a young quantum machine learning researcher based in Toronto who was not involved in the work, agrees. “These impressive results help indicate that more powerful algorithms can be realized on current NISQ hardware–quantum computers [still] in need of error correction and showcase the potential of more useful quantum machine learning applications.”

Schuld also pointed out that the results in hardware, although exciting, have their limitations.

One is that the quantum computer in this case is pretty bare-bones. “Proof-of-principle experiments [generally] use at least five qubits these days,” she said.

“Would these techniques be good enough to beat almost 30 years of classical methods?” asked Schuld. “This is something that we have to establish in the coming years.”